Quebec’s top court ordered Hudson’s Bay Co. to pay rent at six malls in the province, a win for the landlords seeking payments withheld during the pandemic.

Since April, HBC has stopped paying rent at at least two dozen locations across the country, triggering a wave of lawsuits from landlords seeking the unpaid rent and, in some cases, eviction orders.

The six rulings from Quebec Superior Court – one for each of the malls – make it clear that HBC, which operates Hudson’s Bay, Saks Fifth Avenue and Saks Off 5th chains, must pay rent.

It comes after landlords, Oxford Properties, Cominar REIT and Dorval Property Corp. had each petitioned for safeguard orders to force HBC to pay rent.

“At first glance it appears clearly that HBC has to pay immediately the stipulated monthly rent. It’s outlined in the lease and that is not disputed,” Justice Katheryne Desfossés said in her ruling released Friday about Oxford’s La Capitale mall in Quebec City.

The six rulings made by the judge were similar for each mall.

Whether the pandemic restrictions can be cited as a legal disturbance, and therefore a reason not to pay rent, is a key issue. But it still has to be debated and adjudicated in a court. The set of six safeguard orders is an interim, emergency step to force HBC to keep paying until the deeper issue is settled.

Oxford plans to file another lawsuit against HBC to recover the rest of the unpaid rent. It is not known whether the other two landlords will do the same.

“What is in dispute is HBC’s right to unilaterally reduce the rent it pays without prior court authorization. Now, a party cannot do justice to itself,” Justice Desfossés said in the ruling on Oxford’s La Capitale mall.

She took exception to HBC’s behaviour and said the retailer’s actions weaken its arguments. HBC stopped paying the rent in April but waited until the fall to accuse the property owners of not operating safe malls during the pandemic.

“HBC has withheld 100 per cent of the rent since April 1, 2020, but didn’t send a formal notice requiring La Capitale to correct its alleged failure until September, 2020,” Justice Desfossés said.

“At first glance, the damage to La Capitale seems serious or irreparable, because HBC is a major tenant and La Capitale relies on payment of rent by HBC to meet its obligations,” she said.

“HBC has completely failed to pay all of its rents since April, 2020, even though its doors have been open since the end of May, 2020. Without the requested order, La Capitale will incur a sharp loss in rent, while its own payment and maintenance obligations remain in place,” the ruling read.

HBC repeated on Sunday that it believes the burden posed by the pandemic should be shared fairly by both landlords and retailers. In situations in which the company is not able to come to an agreement with landlords, HBC is “happy to have the courts determine what is fair and reasonable,” Ian Putnam, HBC Properties and Investments’ president and chief executive officer, said in a statement.

Friday’s rulings are a blow to HBC, which had already been trying to revamp its business before the pandemic started and ruined many retailers. Now with COVID-19 cases hitting record highs, cities across Canada are severely restricting activity, including closing non-essential retail in some jurisdictions during the most critical shopping period before Christmas.

The safeguard orders require HBC to pay 100 per cent of the rent at the six properties for a period of up to six months, starting in the month in which the landlords’ petitioned the court for help.

HBC is required to pay the landlords the following unpaid rent within five days of Friday’s rulings.

At Oxford’s Les Galeries de la Capitale in Quebec City and Les Promenades Gatineau, the retailer owes a total of $1.1-million for September, October and November, according to the court filings.

At Cominar’s Champlain Mall in Brossard, Que., and Centre Rockland and Centre Laval in Montreal, the retailer owes $613,231 for unpaid rent in October and November.

At Dorval Property’s Les Jardins, HBC must pay $119,418 in unpaid rent for the past two months, according to court documents. 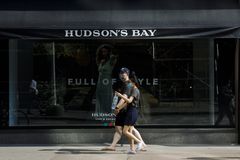 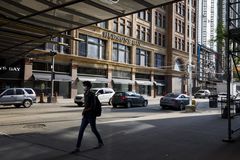 Follow Rachelle Younglai and Tu Thanh Ha on Twitter @rachyounglai @TuThanhHa
Report an error Editorial code of conduct
Due to technical reasons, we have temporarily removed commenting from our articles. We hope to have this fixed soon. Thank you for your patience. If you are looking to give feedback on our new site, please send it along to feedback@globeandmail.com. If you want to write a letter to the editor, please forward to letters@globeandmail.com.
Comments