The Quebec government and commercial partner Pallinghurst Group are pledging up to $600-million to recapitalize Nemaska Lithium Inc. and vault the chemical company out of bankruptcy protection in a move that highlights the importance of vehicle electrification to the province’s economic strategy.

Nemaska has accepted a purchase offer structured as a credit bid from a group made up of Orion Mine Finance, its biggest secured creditor; Investissement Québec; and Pallinghurst, the Montreal-based company said in a statement Monday. Pallinghurst is a U.K.-based mining and metals private equity investor that has also invested in Canadian graphite company Nouveau Monde Graphite.

The buyers are offering to assume at least $146.5-million in liabilities including claims owed to Orion, Nemaska said. Quebec and Pallinghurst have also signalled their intention to invest up to $600-million in a new company emerging from creditor protection, Nemaska said.

The sale caps months of uncertainty for Nemaska, whose plans for a hard rock mine and electrochemical plant in Quebec could create a new supply of lithium needed for rechargeable batteries in electric vehicles and mobile phones. Demand for such batteries is expected to increase in the years ahead, driven by growth in Asia, Europe and North America, according to the Quebec government.

“The Nemaska Lithium project is a strategic project for Quebec and could contribute to economic recovery,” Quebec Economy Minister Pierre Fitzgibbon said in an e-mailed statement, adding the development of batteries for electric vehicles is at the heart of the government’s priorities. “It is essential to establish as many links as possible in the value chain, ranging from the extraction of minerals to the manufacture of batteries, so that Quebec can reap the maximum benefits.”

Nemaska calls itself a chemical company whose activities will be vertically integrated. Under previous plans, it intended to build a spodumene mine near Nemiscau in northwestern Quebec, where lithium will be extracted (spodumene is a mineral rich in lithium), as well as a lithium hydroxide production facility in Shawinigan, Que., where the metal will undergo further value-added transformation.

Things appeared to be on track for the company in 2018 when it raised $1.1-billion from investors, including an $80-million private placement of stock with the Quebec government and a $280-million public offering of shares. It all came crashing down in December of last year, when the company filed for creditor protection amid ballooning costs.

In a legislative committee last week, Mr. Fitzgibbon called it a poorly designed project that hasn’t worked out for the province. “We, the eight million people of Quebec, currently hold $80-million in this thing and it hasn’t worked out,” he said. “I’m very upset by that because that money is lost. … It is a financial disaster.”

Quebec is now betting that it can get the company back on track, together with Pallinghurst. The two partners will each invest up to $95-million in fresh cash to start, a government spokesman said. They will raise money necessary to undertake the project once they’ve done updated engineering studies.

Under the accepted offer announced Monday, Quebec and Pallinghurst will buy all of the outstanding shares of an entity that will emerge from bankruptcy protection and join with assets controlled by Orion to form a new business, Nemaska said.

Current Nemaska shareholders, largely made up of retail investors, would likely be wiped out under the proposal as the new company emerging from creditor protection is taken private. The transaction still has to receive court approval.

Gabrielle Tellier, a spokeswoman for Nemaska, declined to comment.

The province is seeking other investment partners for other projects in a wider battery-making push that Mr. Fitzgibbon estimates will cost upward of $7-billion, from mineral extraction to material production.

Nemaska raises $1.1-billion from investors for Quebec lithium mine, production facility
May 30, 2018 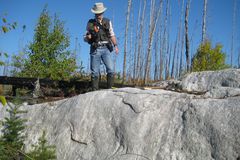