A Quebec real estate developer is seeking financial help from the Quebec government as it puts forth a rival bid – and vision – for Transat AT Inc., putting pressure on Air Canada to raise its friendly offer for the Montreal-based airline and travel company.

Group Mach Inc. went public on Tuesday with a conditional offer of $14 a share for Transat. Air Canada has been in exclusive talks since May 16 to buy the company for $13 a share, or $520-million. Some investors have called that offer too low.

The real estate firm said its hostile bid requires $120-million in funding from Investissement Québec, the province’s investment arm, a request that did not get a warm reception.

Premier François Legault said the government has to be prudent because there is already a Quebec offer, that of Montreal-based Air Canada. He noted that it is a private transaction and Transat’s board and shareholders will decide the outcome. “We said at the beginning that we were concerned there would be an offer that came from outside Quebec and that we were ready to help a Quebec group to put in place an offer,” Mr. Legault said. “Now we have two Quebec groups. So I don’t think the government necessarily has to get involved. If there’s a good proposal and an attractive investment for Investissement Québec, they can look at that. But I don’t see the urgency here given we’re talking about two Quebec companies.”

Isabelle Fontaine, spokesperson for Investissement Québec, which provides financing for companies looking to expand in the province, said Mach’s bid and request will be “analyzed on merit.”

Vincent Chiara, chief executive officer of Mach, said talks with the Quebec government are “ongoing.” “They said they would provide that type of financing if they were satisfied with the business plan, which we will submit to them in the next couple of business days,” Mr. Chiara said. “They weren’t opposed to the idea.”

The company said it would preserve Transat’s Montreal head office, all 5,000 jobs, and its divisions: the airline, travel agency and a hotel being developed in Mexico. Mach’s offer includes a 25-per-cent investment from Spanish real estate developer TM Grupo Inmobiliario, a builder of holiday homes in the Mediterranean and operator of hotels in Mexico under the brand The Fives Hotels and Residences.

In a phone interview, Mr. Chiara said TM’s Mexican experience would ensure Transat’s business plan is executed while reducing the risk. “I am not sure about Air Canada’s interest in the vacation part of Transat. I think they’re more interested in Air Transat,” Mr. Chiara said.

Air Canada and Transat said in separate statements their talks will continue until late June. “During this exclusivity period it is contemplated that Air Canada will complete its due diligence review and the parties will finalize the negotiation of a definitive agreement regarding the acquisition of all of the shares of Transat,” Transat said.

Shares of Transat rose 11.5 per cent to $13.20 on Tuesday morning before being halted, according to Bloomberg data.

Transat’s largest shareholder, Montreal money manager Letko Brosseau and Associates, has said the company should restore profitability before selling. The firm, which holds 20 per cent of the company’s shares, did not respond to a request for comment on Tuesday. PenderFund Capital Management of Vancouver, another shareholder, said last week the company is worth at least $15 a share.

Transat operates Canada’s third-biggest airline, with 40 jets, and sells vacation packages to about 60 destinations. The company is building a beach-front resort in Puerto Morelos, Mexico, its first step in a plan to own or manage 5,000 hotel rooms by 2024. Transat agreed to limit spending on the project during the talks with Air Canada, a sign the country’s biggest airline is not interested in resorts.

Mach, an office developer, said it would make the hotel development a bigger part of Transat. It said TM would move its three Mexican hotels, with a total of 1,000 rooms, into Transat’s platform. Mach said the partnership would own 8,000 hotel rooms and manage another 4,000 by 2022.

While not a household name, Mach’s Mr. Chiara is no stranger to high-profile business deals in Quebec. The real estate magnate, the son of Italian immigrants who settled in Montreal in the 1950s, practised law before clients invited him to partner with them in their investments. Among his key partners over the years has been Montreal’s billionaire Saputo family, with whom he bought the CIBC Tower in Montreal, Tour de la Bourse stock exchange tower, and the historic Sun Life building.

Transat has agreed to pay Air Canada $15-million if it ends the agreement or accepts another bid. Air Canada will pay Transat $40-million if government or regulators reject the deal. The Air Canada offer requires support from two-thirds of Transat shareholders, meaning Letko Brosseau, FTQ and the Caisse have enough votes to turn it down.

Mr. Chiara said he has offered to roll the shares of the Caisse and FTQ into a privately held Transat.

Desjardins analyst Benoit Poirier called the Mach offer an “interesting” opportunity for the funds to take part in the hotel strategy. However, he said in a research note Air Canada could offer more money, given the cost savings and other benefits of buying a smaller competitor. For Air Canada, these benefits include access to a fleet of new Airbus jets and the prospect of eliminating an aggressive competitor.

Evening Update: Transat negotiations up in the air; Trudeau announces billions to foreign aid focused on women and children
June 4, 2019 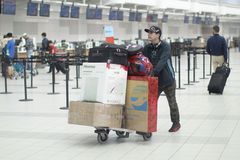