Perhaps it was only a coincidence that Quebec Premier Philippe Couillard chose Tuesday to announce his goal of reducing oil consumption in the province’s transportation sector by 40 per cent below 2013 levels by 2030. But coming just after his Canadian Affairs Minister Jean-Marc Fournier lambasted Ottawa for pulling rank over British Columbia on the Trans Mountain pipeline, it looked like just another virtue-signalling assertion by Quebec on the environment file.

There is basically no likelihood that the target set by Mr. Couillard on Tuesday could be met without slapping punitive taxes on the gas-guzzling SUVs and trucks Quebeckers have been buying in ever greater proportion in recent years. But the Liberal Premier has already rejected any such measure. In his own forestry-dependent Roberval riding, Mr. Couillard noted recently that “those people get around in pick-ups.”

Indeed, almost 60 per cent of the record 469,000 new vehicles sold in Quebec in 2017 were in the light-truck category that includes sports-utility vehicles and pick-ups. That is up from about 40 per cent of the 419,000 new vehicles sold in the province in 2013. The number of personal vehicles in the province has grown at three times the rate of the population since 1990 and electric cars still amount to a rounding error among the nearly five million vehicles on Quebec’s roads.

Of course, this is an election year in Quebec, so politicians of all stripes are falling all over themselves to 1) insist Quebec alone should be able to decide the fate of energy and infrastructure projects in the province; and 2) establish their green credentials.

For the opposition Parti Québécois, this means insisting Quebec become an independent country to prevent Ottawa from imposing its will on the province. For Mr. Couillard’s federalist Liberals, it means demanding that Ottawa transfer full authority to Quebec for approving pipelines and ports on its territory.

Still, pro-independence or not, no party has a credible plan for weaning Quebec off of oil. Indeed, the province’s overall consumption of the commodity once known as black gold, but now mostly denounced for its role in global warming, has been growing. And almost all of it arrives by pipeline or tanker to supply the province’s two refineries.

For the nearly two decades until 2016, almost all of the oil Quebec consumed came from overseas producers. In 2010, imported crude accounted for 85 per cent of the oil used in the province, and less than 1 per cent of foreign oil came from the United States. Domestic oil from Atlantic Canada made up 15 per cent of consumption. Algeria, a North African country hardly known as a model of democracy, was the main source of oil used in Quebec for several years running.

Everything changed last year with the reversal of Enbridge’s 9B pipeline. Not only did oil imports drop 26 per cent from 2016 as the pipeline reversal allowed Alberta oil to flow to Montreal, but the United States displaced Algeria as the main source of foreign oil, accounting for two-thirds of the 158,000 barrels a day the province imported in 2017, according to National Energy Board statistics.

While Quebec’s refineries do not disclose the sources of the oil they use, most of it now consists of conventional light crude from Alberta and shale oil from the United States. But Line 9B alone, with a capacity of 300,000 b/d, cannot supply Quebec with all of the oil it needs. The rest comes directly by oil tanker or via the 45,000-b/d Portland-Montreal pipeline that ships Eastern Canadian and foreign oil to Montreal from the port of Portland in Maine.

Most of the oil that would have been shipped through the now cancelled Energy East pipeline would have been destined for the port of Saint John in New Brunswick. But the defunct TransCanada project could also have transported Alberta oil to Suncor’s Montreal refinery and Valero’s Saint-Romuald, Que., facility and allowed the province to eliminate its use of foreign crude entirely.

That’s not to say it would have happened. Refineries typically choose the cheapest crude available. And while Western Canadian oil currently sells at a discount to foreign crude, making it attractive to Quebec refineries, the whole point of building pipelines to tidewater is to reduce if not eliminate that differential by easing transportation bottlenecks and making Alberta less dependent on the U.S. market.

Still, despite Mr. Couillard’s ambitious goals, Quebec will still be using a lot of oil in 2030. Would he rather the province get it from Algeria or Alberta? 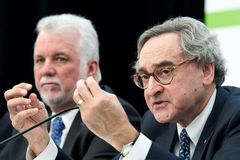 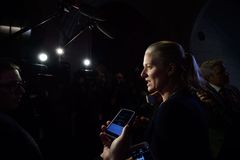