Royal Bank of Canada leaned on its retail-banking and wealth-management divisions to boost third-quarter profit and overcome a weak spell in capital markets, setting a cautiously optimistic tone as earnings season for Canada’s big banks begins.

Canada’s largest bank by assets is the first major lender to report fiscal third-quarter results, and its performance was mixed. Although profit increased 5 per cent to $3.26-billion and RBC raised its quarterly dividend, earnings per share fell short of expectations. That was largely due to a difficult quarter for divisions that live and die by financial markets, as less active clients left banks competing for a diminished pool of fees.

Banks have been operating under a cloud of economic uncertainty, as trade tensions and slowing global growth have put pressure on central banks to cut interest rates. RBC’s expected loan losses of $425-million increased 23 per cent from unusually low levels a year earlier, but that was a modest rise from the second quarter and less than analysts had anticipated. And the bank made no notable changes to its economic forecasts, in spite of jitters among some investors about early signs of a possible recession.

“Certainly we’ve been anticipating that we could be late-innings [in the current economic cycle], starting well over a year ago, and embedded [that] into our projections" for expected loan losses, said chief financial officer Rod Bolger. But “the current economic conditions remain solid," he said.

RBC expects its lending margins will be squeezed in the coming quarters, especially if the Bank of Canada and the U.S. Federal Reserve slash interest rates, as some experts have predicted. But that could also ease the burden on debt-laden consumers and businesses, prolonging the health of banks’ credit portfolios. “Out of the last 12 years, we’ve dealt with 10 of those years having a downward trajectory on interest rates, so this is not new for us. We know how to manage this,” Mr. Bolger said.

For the three months ending July 31, RBC reported earnings per share of $2.22, compared with $2.10 a year earlier. Adjusting for certain items, RBC said it earned $2.26 a share, whereas analysts expected $2.31 a share on average, according to Refinitiv.

Much of that miss can be attributed to what chief executive officer Dave McKay called “a challenging market backdrop.” Profit from capital markets fell 6 per cent to $653-million, owing partly to lower revenue from trading and loan syndication, as well as one-off losses on some business loans.

“Not the resilient quarter we were looking for," said Eight Capital analyst Steve Theriault, "but not outside the range of normal quarterly volatility.”

The bank’s investor and treasury services arm was hit harder, with profit falling to $118-million, down 24 per cent from a year earlier.

It will be up to new leaders to confront these challenges, as Doug McGregor, RBC’s head of capital markets and investor and treasury services, announced he will retire in January after 37 years at the bank. Derek Neldner, a former energy banker who has run RBC’s global investment banking business since last year, will take over as group head of capital markets.

“Doug has played a pivotal role in growing RBC Capital Markets from being the Canadian market leader to also being a top-10 global investment bank,” Mr. McKay said. “Most importantly, Doug has led with strong judgment and integrity.”

In RBC’s core personal and commercial banking division, third-quarter profit rose 10 per cent to $1.66-billion, while wealth-management profit improved 11 per cent to $693-million. Mortgage balances also rose nearly 6 per cent, after a period of depressed growth while borrowers adjusted to a series of regulatory changes.

The bank’s share price traded modestly higher on the Toronto Stock Exchange on Wednesday, closing at $99.91.

'We did it the right way’: Doug McGregor retires after guiding RBC Capital Markets to global leadership
Subscriber content
August 21, 2019 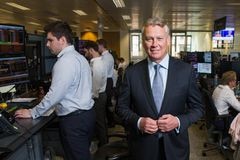