Amid a digital revolution upending norms in nearly every industry, Royal Bank of Canada is investing heavily in a new division that will fundamentally alter the way it targets and attracts personal and commercial banking customers.

At an investor conference on Wednesday, Canada’s largest lender unveiled RBC Ventures, an arm designed to lure clients using unconventional means – initiatives and apps the bank hopes will make Canadians much more likely to switch financial institutions, something they are currently reluctant to do.

For decades, RBC’s retail and personal bank pursued clients using traditional sales methods, such as mailing millions of credit card offers directly to Canadian homes. Bank branches also served as large nets that helped gather millions of customers. Once clients were inside, they could be offered multiple products.

Until recently, these tactics were rather lucrative, and the personal and commercial bank dominated RBC’s bottom line, delivering 50 per cent of total profit. In the past few years, however, RBC executives realized the nature of relationships between customers and companies was changing – and rapidly. Everything from voice-activated home devices, such as Amazon Echo, to ride-hailing apps, such as Lyft, established new norms for client interactions.

To augment its outreach, RBC decided to build businesses in this RBC Ventures unit that reach clients well before they consider whether they need a banking product.

Instead of simply advertising small business loans, hoping that clients would reach out when they were ready to start new ventures, the bank has built a new digital business in-house called Ownr. As the name implies, this strand of RBC Ventures walks potential business owners through all the steps necessary to set up a company − everything from arranging all of the legal documents to designing a corporate logo. The hope is that, at the end of the process, the customer will also tack on an RBC small business loan.

“We’re broadly reimagining the role we play in a client’s life,” Mike Dobbins, who runs RBC Ventures, said in an interview.

At the moment, RBC Ventures has seven such businesses in the market. Another is Arrive, a concierge service for newcomers to Canada that will walk them through all of the important steps before moving here, so that they don’t have to scour government websites for all of the required paper work. It can also help them arrange schools, and possibly even a home − which might require a mortgage.

Twelve more ventures are currently in development, and Mr. Dobbins conservatively estimates the Ventures arm can sign up five million users to the new apps by 2023. He hopes to convert at least 10 per cent of them to RBC products and services.

The seeds of RBC’s new mindset were planted three years ago, when a group of executives hunkered down to discuss how technology was transforming nearly every industry. The underlying message was that banking would change, too. “We had to try something different,” RBC chief executive officer Dave McKay said in an interview. “And we saw a secular opportunity to do that” – a result of such widespread digital disruption.

A characteristic of Canadian banking provided extra incentive. Domestic retail clients have long been loath to change banks, and in recent years it’s been even harder for lenders to convince them to do so. Switching rates, or the percentage of clients prepared to change banks, has fallen into the single digits.

Multiple forces are driving this, but Canadian banks partly have themselves to blame. Lately, the largest lenders have adopted the bundling model favoured by telecom companies, providing discounts to clients who have multiple products with a single lender – such as a chequing account, a mortgage and a credit card. And when so much of a user’s financial life is tied to a single institution, changing banks becomes a hassle.

“We were frustrated that we couldn’t get more customers to try [us],” Mr. McKay said. “They were inert.”

To respond, the bank set up RBC Ventures, a brand new division run by Mr. Dobbins, an American who joined RBC in 2010. Mr. Dobbins reports directly to Mr. McKay, illustrating just how much RBC values its new division.

When building RBC Ventures over the last two years, Mr. Dobbins collaborated with executives across the organization. Bold new ideas have a history of dying inside large, bureaucratic institutions, so the goal from day one was to have other leaders buy in – particularly because a culture change was necessary.

RBC Ventures is run out of its own office on Toronto’s waterfront, and it is set up as a tech incubator. The division has an open-concept layout with whiteboards everywhere, and its dress code is rather informal, with Fjallraven backpacks serving as a preferred laptop bag.

Inspiration for the new division comes from Silicon Valley and some large global disruptors. Mr. McKay said he bounced many of the ideas that helped form RBC Ventures off American tech executives on trips to California, and Mr. Dobbins travelled to China with personal and commercial banking head Neil McLaughlin to study what dominant players there, such as WeChat, are doing to lure clients.

RBC is hungry for ways to tap back into the rich flow of customer data increasingly being gathered by foreign technology giants. “We don’t want to be buying back our clients through someone else’s channel,” Mr. McKay told reporters after the conference. “Our data’s different, so we’ll have different insights. No one’s going to have the complete picture but you have to take control of your destiny.” 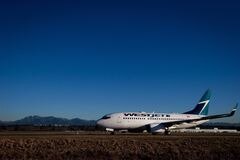 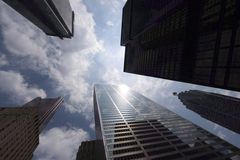 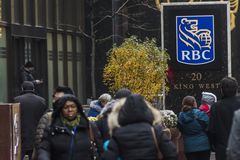 Follow Tim Kiladze and James Bradshaw on Twitter @timkiladze @jembradshaw
Report an error Editorial code of conduct
Due to technical reasons, we have temporarily removed commenting from our articles. We hope to have this fixed soon. Thank you for your patience. If you are looking to give feedback on our new site, please send it along to feedback@globeandmail.com. If you want to write a letter to the editor, please forward to letters@globeandmail.com.
Comments