Prominent U.S.-registered short seller Viceroy Research has taken a short position in Canadian oil company Reconnaissance Energy Africa Ltd. (ReconAfrica) , alleging the company is “drilling blind” and has a “near-zero chance” of finding any deposits of value in its Namibia exploration project.

In a report released Thursday, Viceroy said it has shared its detailed findings with Canadian regulators and expects them to take action.

ReconAfrica’s stock price on the TSX Venture Exchange has soared from about 50 cents to more than $13 over the past 18 months, despite warnings from environmentalists that its drilling could threaten the fragile ecosystem of the wildlife-rich Okavango Delta.

ReconAfrica, which trades in Canada and on the Frankfurt Stock Exchange, said Thursday the Viceroy report “appears to contain groundless allegations.” The company said it was coming under attack by short sellers with “predatory tactics.”

ReconAfrica’s shares fell sharply in early trading on the TSX Venture on Thursday, losing nearly 10 per cent of their value by mid-afternoon. But they recovered almost all of those losses and closed just slightly down at $13.34.

The company’s manager of investor relations, Grayson Andersen, tweeted that the Viceroy report was “full of dated references and incorrect information.”

The company said its first test well in Namibia has found clear evidence of an “active conventional petroleum system” in the Kavango Basin.

“ReconAfrica has undertaken every aspect of its financing, trading and reporting transparently and legally, in compliance with applicable securities laws,” the company told The Globe and Mail in an e-mailed statement.

Viceroy, however, describes the company’s stock as “highly speculative” and fuelled by a barrage of paid promotional articles, without any solid drilling data to support its high valuation.

“Once RECO’s promotional veil has been pulled back, we believe the company will revert to trading as a speculative, but highly unimpressive, penny stock,” the Viceroy report says.

It noted that ReconAfrica’s promotions have relied heavily on a commissioned report by Sproule International Ltd., released in June, 2020. This report, however, was based partly on an assumption that the company would be using fracking to extract unconventional resources – a technique Namibian authorities later ruled out. Sproule estimated the Namibia project had just a 3.3-per-cent chance of commerciality, Viceroy noted.

The Sproule report is largely based on extrapolation from potential analogues in other basins, unsupported by any real data, Viceroy said in its report.

ReconAfrica’s announcements about its first two wells are “a tacit admission of failure” because they omitted key information that is normally standard for such wells, Viceroy said.

While the Canadian company has described the Kavango basin as a “previously unrecognized” extension of the Karoo basin in Southern Africa, the Viceroy report says the company’s licensed area is actually the Owambo basin, which was extensively prospected in the 1960s with little success.

Reaction from the oil industry was mixed. Arthur Millholland, CEO of Canadian Overseas Petroleum Ltd. and a professional geologist, said the Viceroy report is “right on the mark.”

He points in particular to a passage in the report that claims ReconAfrica is “years and tens-of-millions of dollars away” from sufficient drilling that would confirm it has found a commercial deposit of oil or gas. “They are at least 10 years, 15 years away,” said Mr. Millholland. “They have no seismic data.”

Mr. Millholland also shares Viceroy’s concerns about the promotion machine around the company, both the external materials it paid for, and its own disclosures. “This is a very, very slick stock promotion,” he said. “If you read their press releases, the average investor, the little guy, who’s going to roll a thousand bucks here, and 10-grand there, is thinking, ‘This is a bonanza,’ and it’s not.”

Mr. Milholland believes Viceroy is correct to raise concerns about the Sproule report, which was published before Namibia ruled out the fracking method. Even if it were allowed, the information in the report is highly suspect and shouldn’t be relied upon by investors, said Mr. Milholland. “It’s just a guess.”

Richard Andrews, a Vermont-based shareholder of ReconAfrica, dismissed the Viceroy report as sour grapes by a jealous party that likely missed the boat on a tremendous investment. “It’s exceedingly incorrect to talk about this as a fantasy and a total promotion, there’s no oil there, and they’re not even drilling where they say they’re drilling,” Mr. Andrews said.

He agreed, however, that the Sproule report should not be given much credence, as it was an extremely early-stage peek into what might be in the ground in Namibia.

Mr. Andrews also acknowledged that external promotional claims around ReconAfrica that have appeared on sites such as oilprice.com, claiming the company could be sitting on “120 billion barrels of oil,” are “ridiculous.”

The actual recoverable barrels of oil would likely only be a “small fraction of that,” he added. “It’s still going to be a fabulously wealthy resource that will be I’m sure developed, and it should be economic.” 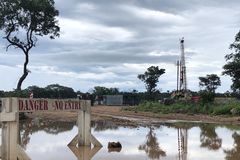 As Calgary’s ReconAfrica drills for Namibian oil, a global outcry over endangered elephants grows
May 30, 2021 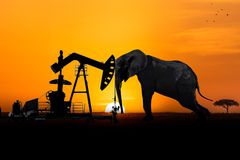