Canada’s recovery in international goods trade continued in October despite a growing second wave of the COVID-19 virus, as imports surpassed prepandemic levels for the first time while exports posted their fifth gain in six months.

Statistics Canada reported Friday that October’s merchandise trade deficit was $3.76-billion, down slightly from September’s revised total of $3.82-billion, with exports up 2.2 per cent and imports up 1.9 per cent. Both sides of the trade ledger have been growing for months, as international trade has gradually regained most of what it lost in the spring’s global lockdowns aimed at containing the virus.

Total merchandise trade in October was just 1.6 per cent below its level of February, the last month before the pandemic hit. At its worst, the dramatic, worldwide economic slowdown triggered by the pandemic had reduced Canadian trade by nearly 30 per cent.

“So far, so good,” Export Development Canada chief executive Peter Hall said in a telephone interview Friday. He noted that much of the trade recovery has been driven by strong consumer demand, including for big-ticket items such as cars, real estate and home renovations – which he interprets as a vote of confidence in the recovery.

“This is a sign, more than anything else, of the economy’s resilience,” he said.

But other economists said the details in the trade data continue to show an uneven and far from complete recovery.

While the goods trade has rebounded smartly, October’s services data continued to bear the scars of extensive COVID-19 restrictions that have kept activity far from normal. Despite gains in both imports and exports of services in the month, total services trade remains 26 per cent lower than it was before the pandemic – crippled by severe limits on international travel and tourism.

And on the goods side, the export recovery has lagged that of imports, which have benefited from massive government spending that has lit a fire under domestic demand. While imports edged slightly above their prepandemic level in October, exports were still 3.5 per cent below their February total, held back primarily by still-tepid demand and prices for Canada’s energy exports.

October’s exports were up in eight of 11 sectors, led by a 10.2-per-cent surge in consumer products. Exports also benefited from a 7.8-per-cent rise in the energy sector, on stronger volumes and prices for both oil and natural gas. However, Statscan noted that energy exports remained nearly 20 per cent below their February level.

Exports of cars and light trucks fell 6.8 per cent, partly due to assembly plants slowing their production to adjust for shifting consumer demand, the statistical agency said. Nevertheless, shipments remained above prepandemic levels for a fourth straight month.

On the import side, seven of 11 sectors showed improvement, led by a 9.5-per-cent jump in electronic equipment – reflecting a big rebound in Canadians’ appetite for new cellphones. Statscan noted that with cellphone makers launching new products in Canada in October, demand dropped off sharply in September, but bounced back when the new models arrived.

Meanwhile, the quick recovery in Canadian household demand continued to play out in consumer goods imports, which rose 4.3 per cent in October, reaching a record high.

The rebound in demand at home and in key export markets has come even as households and businesses have sharply increased their savings during the pandemic. U.S. personal savings have risen by roughly US$1-trillion since the crisis began, while Canadians added nearly $150-billion to their savings in the first six months of the pandemic.

Mr. Hall argued that this puts ample fuel in place for trade growth next year, when the rollout of vaccines is expected to return global activity to something much closer to normal.

“The big question is, will we actually see overspending for a while, once we all start feeling comfortable about things? Canadian exports need to be calibrated to the possibility that we might actually see much better flows of activity than we’ve seen to date,” he said.

In the meantime, the country’s swollen trade deficit – which has more than doubled from this time last year – is unlikely to reverse as long as the pandemic continues to affect consumption patterns at home and in foreign markets, Bank of Montreal economist Benjamin Reitzes said.

“With energy prices remaining low and consumption focused on goods, it’s going to be difficult to meaningfully narrow the gap,” Mr. Reitzes wrote in a research note.

“Indeed, these sizable trade deficits could be here until a vaccine allows us to emerge from the pandemic, shifting consumption patterns and potentially pushing oil prices modestly higher.”

Opinion
Canada’s rapidly approaching fiscal crisis isn’t driven by the pandemic
Subscriber content
December 3, 2020
Opinion
Canada has plenty of reasons to stand up to China. Arctic sovereignty isn’t one of them
December 1, 2020 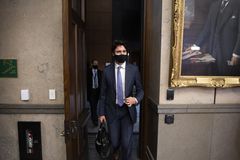