Marina StraussRetailing Reporter
Published May 15, 2019 Updated May 16, 2019
For Subscribers

The United States represents one of the biggest growth opportunities for Tim Hortons but the company needs to find a new business model to succeed in that market, its president says.

The Toronto-based coffee-and-doughnut chain has tried for years to build a thriving business in the country. Now, it must adjust its strategy in the U.S. market, including smaller restaurants and different menu items, Alex Macedo said in an interview on Wednesday without elaborating.

Tim Hortons has made strong sales and profit gains in just two U.S. cities – Buffalo and Detroit – because they are close enough to the Canadian border that consumers there are aware of the brand, he said.

“When you’re not in the border cities, there is no brand awareness,” he said after parent company Restaurant Brands International Inc.’s (RBI) first investor day in New York. “You can’t just take what we have in Canada and drop it in the middle of a new country. The U.S. and Canada are distinct markets.”

RBI, which also owns the Burger King and Popeyes Louisiana Kitchen chains, issued ambitious goals to boost its total number of restaurants by more than 50 per cent to 40,000 globally in eight to 10 years from 26,000 today.

RBI, which has faced sluggish sales growth in an ultracompetitive fast-food market, aims to increase its coffee, burger and chicken markets by 5-per-cent to 6-per-cent annually over the next five years. In its first quarter, the company’s sales at stores that have been open a year or more slipped 0.6 per cent at Tim Hortons while those sales grew 2.2 per cent at Burger King − less than the 3.8-per-cent gain a year earlier – and 0.6 per cent at Popeyes (compared with 3.2 per cent the previous year.)

Mr. Macedo said RBI’s global target is “a bold challenge but it’s realistic.” To reach 40,000 restaurants, RBI would have to launch 1,400 annually, not much more than the 1,300 new shops it rolled out in each of 2017 and 2018, said Josh Kobza, the company’s chief operating officer.

Salted egg-yolk Timbit and ‘matcha’ latte: How Tim Hortons plans to stick-handle its way into the Chinese market

In February, the chain opened its first restaurant in China, with four there today and a goal of 1,500 in a decade, Mr. Macedo said. As well, the chain operates restaurants in the Middle East, Britain, Mexico, Spain and the Philippines. Announcements about the entry into other markets are expected before the end of the year, he said. “There’s more to come.”

Company executives said digital ordering and deliveries, new menu items and a new Tim Hortons loyalty program are among the efforts that will help bolster business.

But Tim Hortons still needs to conquer the U.S. market, he said. Its performance south of the border “has not been where we would like it to be. We have work to do on several fronts including building scale and density in all markets. … I’m confident that in the long term the U.S. represents one of our largest opportunities for development.”

Tim Hortons has struggled to find experienced restaurant operators to team up with in the United States to become master franchisees for entire regions, he said. It is now locked in a legal fight with its franchise partner in Minnesota, which sued the company in February for allegedly falsely representing the financial performance potential of the business.

Tim Minn Inc. launched 14 stores in Minnesota with the right to develop more than 260 in all. It says that Tim Hortons USA Inc. and parent RBI made false financial representations to fraudulently induce Tim Minn to open more Tim Hortons restaurants than any other “area developer” in the United States.

Mr. Macedo would not comment on the Minnesota situation because of the legal dispute. RBI spokeswoman Jane Almeida said in an e-mail that the company is “disappointed the franchisee made the decision to close these restaurants without our approval.” She would not elaborate but Jerry Marks, the New Jersey-based lawyer who represents the franchisees, said 10 of the 14 Tim Hortons shops in Minnesota had closed “due to poor financial performance. … All locations are bleeding money.”

Mr. Macedo said Tim Hortons also signed deals in the past 18 months or so with would-be franchisees in Cincinnati and Indianapolis that “didn’t move forward.”

The company is looking for franchise partners with proven track records in the fast-food sector, he said. Tim Hortons is still working on its U.S. strategy and expects to unveil it in October, he said. “Just replicating what we had in Canada in other countries is not the best way for us. … We can’t afford to miss again.”

Canadian cattle producers back Quebec farmers’ beef with Beyond Meat over ‘plant-based meat’ marketing
May 15, 2019 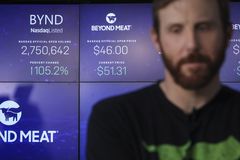 Beyond Meat surges after Tim Hortons launches vegan sandwiches
May 15, 2019 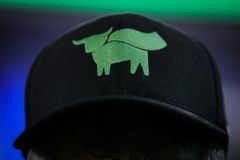 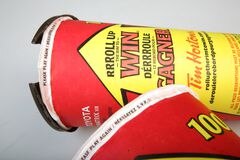