Restaurants across the country are struggling with a labour problem as they try to reopen: many of their former employees don’t want their old jobs back.

Thousands of hospitality workers who were stuck at home during pandemic lockdowns have decided to change careers or start their own businesses, leaving behind a restaurant life that, many say, has always been plagued with low pay, difficult working conditions and a lack of long-term stability.

For restaurants, it’s making economic recovery that much more challenging. “This is definitely the No. 1 issue for us,” said Olivier Bourbeau of national industry group Restaurants Canada.

According to Statistics Canada’s monthly labour survey, employment in food services and accommodation climbed to a pandemic-era high this summer of more than one million people. But that’s still 150,000 fewer than before the pandemic, and much of the gap can be illustrated by the record number of unfilled jobs: 129,000 in June, the most recent month for which data is available.

Many of the public-health rules brought in to fight the pandemic have made hospitality jobs more difficult, leading some to leave the industry.

For a decade, Charlotte Big Canoe had kept two careers going: during the day she worked in education, as a preschool teacher or museum guide, and at night she was a bartender in downtown Toronto.

When friends asked about the stress and time constraints of holding two jobs, “my answer was just always: I’m really enjoying doing both things and right now I don’t have to choose, so I am not going to choose,” Ms. Big Canoe said.

The pandemic changed that. When she returned to the restaurant after the first wave of lockdowns, she found the workplace had changed – in a way she did not like. The easy conversations she had had with customers – the part of the job, she said, that really made it feel worthwhile – were replaced with policing rules such as table sizes and staring down the occasional patron who would not wear a mask.

So, for the first time in her life, Ms. Big Canoe said, she threw herself into finding a full-time position, eventually landing a job at Girl Guides of Canada. “There’s definitely heart pangs of nostalgia, but I don’t know I would ever go back fully” to a restaurant job, she said.

Despite the demand for their services, wages for hospitality workers have barely budged in the past 18 months. The average hourly wage for the sector is about $18 an hour, close to what it was before the pandemic, according to an analysis of Statistics Canada data by University of Waterloo labour economist Mikal Skuterud.

Prof. Skuterud said the high level of uncertainty for businesses right now – whether there could be more lockdowns, for example – means restaurant owners appear to be slow to increase compensation.

“The problem with wage increases is they’re very sticky,” he said. “They’re easy to increase, but they’re very hard to decrease.”

Mr. Bourbeau says that, at the best of times, restaurants tend to operate at slim profit margins – perhaps 5 per cent – and doing so at reduced capacity in most jurisdictions right now, most simply don’t have the money to boost wages.

For many workers who chose not to return, the decision was about pursuing new fields that would leave them less susceptible to economic downturns.

Luke Bergmann was working as a barista in Canmore, Alta., when the pandemic hit. In the early months he worked a few hours a week delivering bags of coffee – but spent most of the time at home collecting the $2,000-a-month Canada Emergency Response Benefit. As the pandemic dragged on, he began to worry that his experience in the service industry wasn’t giving him the skills to survive tough economic times.

So he decided to learn how to code. In early 2021, he moved to Nelson, B.C., enrolled in online web-development courses at Lighthouse Labs and recently got a job with a Saskatchewan startup creating a land-management app.

Mr. Bergmann said that, given the nature of Canada’s growing technology sector and the rise of remote work, he feels like a lot more doors are open to him now. “That just felt really liberating, you know.”

For others who left the hospitality industry, it was about a change in lifestyle. Restaurants can be notoriously high-stress work environments, with long, unpredictable hours and a feeling among staff that they could lose their jobs at any time.

Not 9 to 5, a group advocating for more mental-health care in the food industry, conducted a survey of 673 hospitality professionals this summer and found that half the respondents strongly felt they were experiencing symptoms of burnout or depression. The research was funded by the federal Future Skills Centre.

Kiran Singh, who worked in kitchens for more than a decade in Ireland and Toronto, said he had dreamed of working with food for as long as he could remember, but the work environment of a restaurant had started to wear on him and the pandemic provided the push to try something different.

In late 2020, he and two friends launched a line of seasoning and meal-prep products called Zing, which is currently sold online and at independent retailers in Ontario.

Mr. Singh produces and packages the items himself during the day at a restaurant kitchen – before it opens for evening service.

He said the company now earns enough to support him full-time and that running a small business is, for him, less stressful than what he was doing before.

“I still cook and everything, so I’m perfectly happy,” Mr. Singh said. “But restaurant kitchens – I mean, everyone knows it, it’s a very stressful job. Both physically and mentally. So to move to something else … it’s been really nice.” 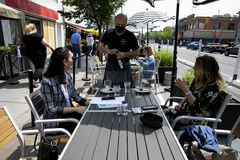 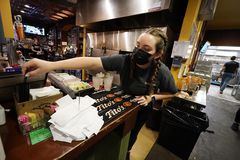