Reported losses from cargo theft in Canada are rising sharply, a costly problem for transportation companies and insurers.

There were 3,143 reported incidents of cargo theft in Canada last year, totalling $229-million in value, according to the Insurance Bureau of Canada (IBC). That’s up from 2,275 incidents and $181-million of stolen merchandise the previous year.

The IBC data show that more than half-a-billion dollars’ worth of merchandise has been stolen from transporters in the last four years. The actual total could be higher, given that many cases aren’t made public.

“A lot of it is unreported ... This is a big issue for insurance companies," Henry Tso, IBC’s vice-president of investigative services, said in an interview.

Some carriers are reluctant to disclose theft incidents because it would affect their insurance premiums and because they don't want the bad publicity, Mr. Tso said.

Toronto-based Northbridge Insurance, which includes various transportation companies among its business customers, said in a report on cargo theft trends released last fall that about 78 per cent of reported cases came from Ontario, in large part because Toronto and its suburbs are a major transport hub, with many truck yards that are prime targets for thieves.

The theft is typically the work of organized gangs that will steal a tractor, break into a yard, hook an unattended trailer, drive away and eventually dump the vehicle after off-loading the merchandise.

Food shipments are harder to retrace and the thieves usually have already lined up a buyer, for example, a non-brand-name grocery store or a restaurant willing to buy seafood at a discount, Mr. Robertson said.

He recalled one case from his time as a detective for Peel Regional Police, which illustrates the sophisticated network some thieves set up before stealing a trailer rig.

It started with a load of plain white T-shirts that was stolen during the night from a truck yard in Brampton.

‎Investigators later found that by 9 a.m. the next morning, half the shipment was already being retailed at a flea market west of Toronto, in a community near Lake Huron.

By the end of the morning, the rest of the T-shirts were in a container, crossing the Peace Bridge toward Buffalo, heading for Los Angeles with India as the final destination.

"That's how quickly they were able to move that product," Mr. Robertson said.

Cargo theft is not a new crime. In the 1970s, the Quebec Police Commission’s inquiry into organized crime reported on the activities of the four Matticks brothers, members of Montreal’s West End Gang whose crew specialized in bank heists and hijacking semi-trailers full of meat, jeans and liquor. “To spot a van or a warehouse, the Matticks brothers drove around in their Cadillac to select their target,” the inquiry said in a report.

Today, the thieves would turn to computers to find their targets.

Mr. Robertson said trailer rigs are most vulnerable during long weekends and holidays, when they are left in a yard, waiting to be delivered. That’s the point that the thieves are looking for because they get extra days to off-load the trucks.

Sometimes, gangs commit not just theft but robbery and kidnapping.

In the spring and summer of 2009, a gang struck 11 times at night in Toronto and Ottawa. Either they entered trucking yards and held up the security guard, or they targeted drivers who had parked for the night and were sleeping in their vehicles. The victims were bound at gunpoint and held in the sleeper compartments of the stolen tractors. In some cases trailers were hooked onto a different tractor, in other cases the same vehicle was driven away and unloaded.

Even simple theft can spiral into legal headaches.

A case in Ontario Superior Court last year involved electronic goods, worth $300,000 according to police, that were transported by Greenway Carriers on behalf of a Delaware broker, FLS Transportation Services.

It was destined for a Best Buy store in Quebec but was stolen while sitting in a yard in Mississauga.

The yard owner, Rosen Express, submitted an insurance claim to Northbridge but the insurer denied the claim, arguing that the shipment was still in the possession of Greenway Carriers.

Mr. Robertson noted that cargo thieves often use their proceeds to fund other criminal activities.

Last September, an eight-month-long joint investigation led by Peel Regional Police led to the arrest of 10 men, eight of them Brampton residents. 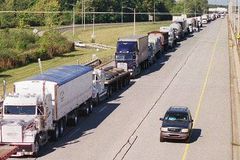