Facing a public backlash, the U.S. company that is outsourced to provide Rogers customers with their e-mail accounts has removed a controversial new term of service that suggested users had obtained consent from all their friends and contacts to share their personal information.

However, Canada’s Privacy Commissioner Daniel Therrien said Tuesday that his office continues to investigate other concerns raised over new terms of service recently sent to users of @rogers.com e-mail addresses.

Toronto-based Rogers Communications Inc. has for several years outsourced to Yahoo the e-mail service it offers to its internet customers. U.S.-based Verizon Communications Inc. acquired Yahoo last year and merged it with AOL to create a digital and media brand called Oath.

“By using the services you agree that you have obtained the consent of your friends and contacts to provide their personal information (for example: their email address or telephone number) to Oath or a third party, as applicable, and that Oath or a third party may use your name to send messages on your behalf to make the services available to your friends and contacts.”

In testimony before a standing parliamentary committee in Ottawa on Tuesday, Mr. Therrien said that after his office began an investigation, Oath agreed to remove that particular term.

“We’re also investigating other issues with respect to that organization, but on that specific point, my understanding is that they have agreed to withdraw that part,” he said.

Tobi Cohen, a spokeswoman for the Privacy Commissioner, said that in addition to that provision, “We have received complaints related to other aspects of the company’s terms of service agreement and have opened an investigation involving both Rogers and Yahoo/Oath.” She said 10 people complained about the new policy.

Charles Stewart, a spokesman for Oath, said in a statement on Tuesday that the now-withdrawn provision “made clear to our users that they were responsible for obtaining the consent of their contacts when they chose to have Yahoo Messenger invite their friends to the app.”

The term, which has now been removed from a 27-page document outlining the new policy, did not specifically mention Yahoo Messenger.

Mr. Stewart said Oath did not use those contacts for advertising purposes and added, “Upon further review, we’ve removed this section of our terms of service as the functionality does not currently exist in our product offerings.”

Customer anger over what people see as potentially intrusive terms of service comes in the wake of data firm Cambridge Analytica’s misuse of 87 million Facebook users’ information (including the data of more than 620,000 Canadians).

Many Rogers customers also expressed dismay over a term in the policy that allows Oath/Yahoo to automatically monitor users’ communications for the purposes of delivering targeted advertising. (The terms indicate automated e-mail scanning is also used to protect against fraudulent or abusive activities, for instance filtering for spam or malware.)

Using the contents of e-mail to target advertising is not new – Canadian users received a similar message from Yahoo in 2013 – but Rogers customers seemed surprised and unhappy with the policy, complaining on public message forums online and on social media. Some said they would switch to paid e-mail providers that do not track users’ online behaviour.

Google’s popular free e-mail service Gmail said last year that it would stop scanning customer communications for ad personalization (although it still scans e-mails for other purposes, such as to filter spam and to create automated suggested responses). Microsoft’s privacy policy says it does not use “what you say in email, chat, video calls or voicemail, or your documents, photos or other personal files to target ads to you,” but it does track users’ online behaviour on related sites and uses “cookies” or small text files stored on a browser, to provide targeted ads.

In response to requests for comment last month, Oath said customers can opt out of the e-mail scanning that allows the company to deliver what it calls “interest-based advertisements.” But many people complained they could not find a way to do so.

Rogers said Tuesday that it is updating its website to provide customers with more information on this issue and will be e-mailing @rogers.com users directly this week.

“We take our customers’ privacy very seriously. We know some customers had concerns about Yahoo’s term related to personal contacts, so we are pleased it was removed,” spokeswoman Sarah Schmidt said Tuesday. “We are working with our customers to address their questions and help them use Yahoo’s opt out settings to customize their e-mail preferences.” 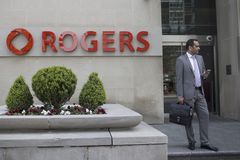