A remote East Coast community with roots in coal and steel might not seem like the setting for Canada’s high-tech future.

Yet some of the country’s brightest minds are leaving big-city labs in Toronto and Silicon Valley and travelling to eastern Nova Scotia to scale up cutting-edge biotechnology.

On the outskirts of Sydney, inside a carbon-neutral glass and concrete structure, entrepreneurs behind promising high-growth startups are testing innovations at scale using industrial equipment such as bioreactors, radio frequency dryers and fermenters.

“You don’t have to be in the middle of a city to do this and in some ways it’s advantageous not to be,” said Dr. Beth Mason, chief executive officer of the Verschuren Centre for Sustainability in Energy and the Environment.

“Clean-tech companies need pilot-scale equipment, they need a big space. This isn’t the IT world where they can work on a computer in a garage.”

Toronto-based Phycus Biotechnologies Inc. had worked out of a lab for years but need a place to scale up, said co-founder and CEO Vikram Pandit.

The startup, which engineers microbes using a fermentation process to make naturally derived ingredients for cosmetics, found the equipment it needed in Cape Breton.

“We needed a facility that was large enough to produce glycolic acid in bigger bioreactors,” Mr. Pandit said. “The Verschuren Centre will help us move our work from the lab to a demonstration scale, which will hopefully attract commercial investors.”

Still, attracting world-class startups and engineers to Cape Breton, a largely rural island with an economy that hinges on more traditional resource-based industries and tourism, might sound like a challenge.

But the Verschuren Centre and its partnership with Innovacorp dubbed AscendBio is starting to create a buzz in the biotechnology startup community, said Paul Richards with Innovacorp, Nova Scotia’s early-stage venture capital organization.

“We’re debunking the myth that startup ecosystems and clusters are an urban phenomenon,” said Mr. Richards, the agri-tech and bio-resource sector lead for the organization.

“In Toronto, they’re a small fish in a big pond. Here they have overwhelming support.”

Last fall, the Verschuren Centre branched off from Cape Breton University and incorporated as a stand-alone research and technology hub, with most of its operations funded through fee-for-service agreements and some additional project-specific federal and provincial funding.

The move freed the centre from some of the constraints and bureaucracy of being tied to an academic institution and allows startups to keep their own intellectual property.

“The fact that we can find all that equipment under one roof and not have to hand over all of this intellectual property was probably the biggest selling feature for us,” said Mark Masotti, president and CEO of AlterBiota.

The Toronto-based startup has created a nanocarbon additive that enhances the performance of concrete.

It also reduces the amount of Portland cement needed – one of the most carbon-intensive building materials on earth – making concrete more sustainable and affordable, he said.

It’s a startup that’s right in the sweet spot of the AscendBio collaboration – companies that are delinking the fossil fuel economy from advanced manufacturing through biotechnology.

To get there, the AscendBio program is looking for startups with a proof of concept or early market discovery that haven’t yet scaled up to reach commercialization.

“Our goal is to derisk them for investment by accelerating them through what we call the valley of death,” Dr. Mason said, referring to a common business term that refers to startups that have begun operations but are not yet generating revenues.

Out of the eight companies in the AscendBio program, seven have completed successful funding rounds raising a total of $7.7-million for combined valuations of $43-million.

Dr. Mason added: “We want to help them reach the next level of growth, which is production of marketable volumes of product.”

As Mr. Masotti with AlterBiota puts it, the program is “the bridge to commercialization.”

A bonus for AlterBiota is being able to potentially collaborate with similar companies in the region, the most well known being CarbonCure Technologies. The Halifax company injects carbon dioxide into concrete to make it stronger and reduce its environmental impact.

Indeed, the AscendBio program hopes that by scaling up in Nova Scotia, the companies will keep an anchor in the province.

For Mr. Richards with Innovacorp, an arm’s length Crown corporation that operates largely through provincial funding, that’s when “it starts to get exciting for economic development.”

“That’s when we see that hockey stick growth and hiring ramps up and capital expenditures increase. It can have a real impact on the community.”

Meanwhile, the AscendBio program has managed to attract startups back to Canada that had fled to the United States.

Ardra Bio Inc., a startup creating natural ingredients for food and cosmetic products, had moved to downtown San Francisco to be part of the IndieBio program.

“A lot of high-tech companies leave Canada,” Ardra co-founder Dr. Pratish Gawand said. “There’s a real problem around brain drain in Canada, and the Verschuren Centre is doing a great job of addressing that.”

The company is using synthetic biology to address the sustainability, unreliable supply and cost of increasing demand for natural products in fruit flavours, fragrances and natural moisturizers.

“If a big consumer company decided to use only natural rose oil in its formulations, we would have to cut down rainforests and start growing roses all over the world,” Dr. Gawand said, adding that it takes 5,000 kilograms of rose petals to make one kilogram of rose oil. “It’s just not sustainable.”

Ardra will be using the massive fermenters at the Verschuren Centre to scale up its technology.

“We were considering going to China and Brazil for this fermentation infrastructure, so the fact that Cape Breton is a bit remote wasn’t an issue,” he said. “We were lucky to find something in Canada.” 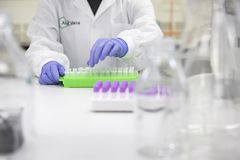 Zymeworks IPO bears good tidings for Canadian biotechnology
Subscriber content
June 4, 2017
Report an error
Due to technical reasons, we have temporarily removed commenting from our articles. We hope to have this fixed soon. Thank you for your patience. If you are looking to give feedback on our new site, please send it along to feedback@globeandmail.com. If you want to write a letter to the editor, please forward to letters@globeandmail.com.
Comments