Katherine Regnier never liked waiting in lines – and so nearly a decade and a half ago, with a $5,000 loan, she set out to help businesses make scheduling easier for customer appointments. It turned out Ms. Regnier was on to something: On Tuesday, her company Coconut Software Corp. will announce a new $28-million financing round to expand its reach among banks and credit unions across North America.

The raise is led by the Toronto growth-equity firm Klass Capital, with many of the company’s past investors returning, including Information Venture Partners, ScaleUp Ventures, Conexus Venture Capital Fund and Bay Partners.

It’s the latest in a string of significant financings for Saskatoon-based companies, and for female-founded companies in Canada. As the pandemic reshapes how financial institutions meet their customers, Coconut and its investors believe they have significant growth ahead.

“It’s not all digital and it’s not all in person,” Ms. Regnier said in an interview. “Enterprises need to think about the entire experience.”

Daniel Klass, managing partner of Klass Capital, added: “People expect more convenience over time – and I think this trend is continuing, with or without the pandemic.”

Coconut helps customers schedule appointments with financial institutions with as few steps as possible, while giving those institutions and their staff dashboards to manage their relationships with customers, reminding them of key moments such as mortgage-renewal deadlines to help retain those customers.

The company says its software also helps people manage unexpected trips to the bank, allowing them to register online and get a message telling them when to arrive. In the era of physical distancing, this translates not just into less time in line, but also less time spent in the cold or rain outdoors before entering a lobby with limited capacity. Less time waiting can mean greater customer satisfaction, while the registration process also helps banks learn more about customer traffic patterns.

The company counts Capital One Financial Corp. and Vancouver City Savings Credit Union as clients, and has some legacy, non-banking clients including Telus Corp. and Rogers Communications Inc. – though Ms. Regnier said that it now primarily seeks financial-institution clients.

That change came in 2018, when she said Coconut was faced with a choice about its growth, after years of serving a variety of enterprise companies as well as small and medium-sized businesses: Did it want to offer something for everyone or everything for a specific market?

“We couldn’t serve all of these markets and be exceptional,” Ms. Regnier said. “I cannot serve a salon as well as a bank. … So we picked financial institutions. People care about their money. People should feel valued when they go to their bank.”

She said that the company has seen 100-per-cent year-over-year revenue growth since its first seed investment in 2016. While Coconut first served mostly Canadian customers, the United States now accounts for about 80 per cent of its business.

Sean O’Connor, managing director of the Conexus Venture Capital, a Saskatchewan-dedicated venture fund, said that the fund has been “outperforming even our wildest expectations” since launching in 2019, showing the value of focusing on an otherwise underserved market.

The Conexus fund is one of Coconut’s investors. Mr. O’Connor, a Coconut director, said that many financial-technology companies focus on automating processes, whereas Coconut instead personalizes customer experiences. “Fintech companies are not exclusively built in the Torontos of Canada,” Mr. O’Connor said. “They can be built in secondary ecosystems as well.”

Another early Coconut investor was StandUp Ventures, one of the first Canadian venture funds that pledged to invest in female-led companies, and which recently passed its goal to raise $30-million for a second fund. StandUp managing director Michelle McBane regularly points out that its investments in female CEOs and founders are not for the sake of social impact, but to generate strong returns from an underserved market. Coconut’s growth, Ms. McBane said, fits that thesis.

Thanks to Ms. Regnier’s intense focus on the financial-institution market and a knack for hiring the right talent, she and Coconut are “the whole package, and I couldn’t be happier,” Ms. McBane said. 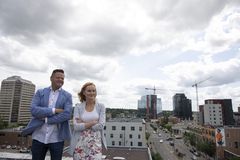 Saskatoon software company looking for employees after getting $4M from investors
November 9, 2017
Follow Josh O’Kane on Twitter @joshokane
Report an error Editorial code of conduct
Due to technical reasons, we have temporarily removed commenting from our articles. We hope to have this fixed soon. Thank you for your patience. If you are looking to give feedback on our new site, please send it along to feedback@globeandmail.com. If you want to write a letter to the editor, please forward to letters@globeandmail.com.
Comments