Bank of Nova Scotia reported a sharp increase in expected loan losses, partly because of a cloudier economic outlook in Canada and Mexico, leaving investors waiting for signs of a turnaround in the second half of 2019.

The bank’s second-quarter profit increased by 3.8 per cent from last year, to $2.26-billion, as higher loans losses and rising costs mostly offset a revenue increase of nearly 11 per cent. The slow growth in the bottom line, which was below analyst expectations, partially obscured some of the bank’s brighter spots, including good results in its international operations and its investment banking unit.

Scotiabank’s financial performance has been saddled with the continuing costs of digesting $7-billion in acquisitions made last year to gain market share in Chile and retool its wealth-management division. At the same time, the bank has pulled out of numerous countries, including some Caribbean islands, to streamline its footprint abroad and reduce its exposure to an array of risks.

Even so, provisions for credit losses – the money banks set aside to cover bad loans – jumped to $873-million, driven in equal measure by loans picked up through acquisitions, growing loan portfolios and the expectation of softer growth in two key markets, Canada and Mexico. Excluding $151-million in provisions tied to acquisitions, booked to satisfy accounting rules, the bank’s expected loan losses climbed by 35 per cent, to $722-million.

Scotiabank’s share price initially fell about 2.6 per cent on the results, then recovered to close down 0.6 per cent to $70.15 on the Toronto Stock Exchange.

Scotiabank chief executive officer Brian Porter also predicted brighter days ahead for Scotiabank as new acquisitions add more to the bottom line. He said he also expects the bank to gather momentum in retail banking as well as capital markets.

“As we look to the second half of 2019, we expect our financial performance to be better than the first half of this year,” Mr. Porter said, on a conference call with analysts.

Newly acquired wealth managers MD Financial Management and Jarislowsky Fraser Ltd. – which cater to physicians and to institutional investors, respectively – added about $60-million to Scotiabank’s second-quarter profit. Assets under administration have grown and the bank said customer-retention rates are improving, predicting that the wealth-management arm is on track to add more than 15 cents to earnings per share in 2020.

Scotiabank also expects benefits from rapid deposit growth in its Canadian retail bank, and from ongoing efforts to control costs, after setting a target to lower its efficiency ratio – which measures cost as a percentage of revenue – to 52 per cent by the end of this fiscal year.

Adjusted to exclude costs from acquisitions and gains from divestitures, Scotiabank earned $1.70 a share. On average, analysts had expected adjusted earnings per share of $1.74, according to Refinitiv.

Revenue was $7.8-billion, up nearly 11 per cent, while non-interest expenses increased almost 9 per cent to $4-billion, as the bank continues to make major investments in digital and regulatory changes.

“Overall, this was a better quarter in many ways than a weak [first fiscal quarter], but lands in roughly the same place … below our estimates,” said Robert Sedran, an analyst at CIBC World Markets Inc., in a research note.

In the core Canadian banking division, which includes wealth management, profit improved by a modest 3 per cent to $1.05-billion thanks to improving balances in loans and deposits. Credit card balances rose 6 per cent as Scotiabank becomes more active in unsecured lending and business loans climbed 9 per cent higher. Yet residential mortgage balances increased only 2 per cent, and “given a slower start to the housing market in 2019,” the pace of growth is unlikely to improve much over the rest of this year, chief financial officer Raj Viswanathan said.

In early May, Scotiabank appointed a new Canadian banking head, Dan Rees, to replace departing group head James O’Sullivan, but Mr. Rees, who succeeds Mr. O’Sullivan on June 1, has yet to detail his plans for the division as the bank prepares to report wealth-management results as a separate unit starting in November.

Profit from Scotiabank’s international businesses, which are concentrated in the United States and Latin America, improved 4 per cent to $700-million. But excluding the one-time costs of acquisitions and divestitures, profit from the division rose by 14 per cent, and the newly acquired businesses helped drive a 29-per-cent increase in loans compared with a year ago.

Profit from the capital markets arm fell 6 per cent, year over year, to $420-million. But it represents an encouraging rebound from profit of $335-million in the first fiscal quarter, which was hampered by market volatility in late 2018. The improvement in the second quarter came partly from better-than-expected trading revenue of $386-million.

Bank of Montreal will report second-quarter results on May 29, and National Bank of Canada wraps up earnings season for the Big Six banks on May 30.

Remaking Scotiabank: Brian Porter is making big changes, but will investors buy in? Subscriber content
May 28, 2019 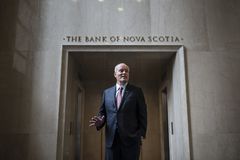 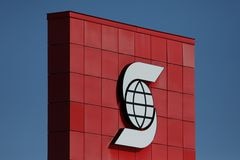