Shaw Communications Inc. said it added the most wireless subscribers in its history in the last quarter, during an intensely competitive and uncertain period for the telecom industry in which its much larger rivals pushed new data plans similar to its own.

Shaw’s regional carrier, Freedom Mobile, has long claimed to lead the way on wireless pricing in Canada, in part by offering plans that do not charge customers fees for exceeding data limits. (Instead, download speeds are throttled after a certain threshold.) But in June, BCE Inc., Rogers Communications Inc. and Telus Corp. followed suit and also began offering unlimited data plans.

Chief executive Brad Shaw says the Calgary-based company has not seen a significant impact from the competitive change. “The industry shift to unlimited plans did not impede our ability to grow our wireless customer base,” he said on an earnings call Friday.

Shaw’s wireless division added approximately 90,700 net new subscribers in the quarter ended Aug. 31, a 6.7-per-cent increase over the same period last year. The wireless unit, which operates in British Columbia, Alberta and Ontario, earned operating income of $54-million before restructuring costs and amortization, up 38.5 per cent year-over-year. Freedom Mobile has also expanded to 19 new markets in the provinces where it operates.

Shaw attributed the performance to the busy back-to-school season and the pricing of its data plans.

The wider industry adoption of unlimited plans is just one element of uncertainty facing the wireless sector. The Big Three are also experimenting with smartphone plans where consumers eventually pay off the cost of a handset, rather than providing subsidies for devices. The market is waiting to see how these changes will affect the financials of telecom companies.

"Investors are nervous and questioning if the telecom space is fundamentally broken,” Desjardins Securities analyst Maher Yaghi said in a research note. “It is difficult to be super bullish in this environment.”

The sector also became a target during the federal election campaign, with the Liberals pledging to reduce bills by 25 per cent and the NDP vowing to cap charges at the global average. The industry contends prices are already coming down, while experts have questioned the feasibility of such policy proposals.

Introducing unlimited plans may prove to be tumultuous at first for the national carriers. On Wednesday, Rogers missed analysts’ profit forecasts when reporting its third-quarter results and reduced its full-year revenue and earnings guidance. Revenue from overage charges sunk by $50-million after the carrier revamped its mobile phone plans. More than one million Canadians signed up for plans under the new pricing model – more than three times the number that Rogers anticipated. (BCE and Telus have yet to report third-quarter earnings.)

Rogers’ share price is down roughly 7.9 per cent since releasing its earnings on Wednesday. RBC Dominion Securities Inc. analyst Drew McReynolds upgraded his rating on Rogers to outperform this week, saying the selloff is overdone. “We believe current levels adequately reflect the transitional impact to unlimited plans,” he wrote in a research note.

Mr. McReynolds said the impact will likely “prove relatively short-lived” and that the continuing expansion in the Canadian wireless market should benefit all carriers.

This past quarter was among the most competitive periods the industry has seen, Paul McAleese, Shaw’s president of wireless, said on Friday’s earnings call. “There is something of a lack of pricing discipline in the market,” he said.

Mr. McAleese suggested the Big Three’s introduction of unlimited plans may have been “a little too aggressive and a bit too early.”

He also criticized the competition’s new approach to how subscribers pay for their smartphones. Plans that eliminate upfront device subsidies in favour of the consumer paying in installments amounts to “a massive price increase wrapped up in a fancy financing bow,” Mr. McAleese said.

“We think Canadians are smart enough to do the math on that,” he added. “It’s painful.”

Freedom will differentiate itself by continuing to offer a subsidy.

For carriers, reducing or eliminating subsidies for hardware is a way to lower their capital costs, but the ultimate benefits are still unclear, some analysts say. The model “transfers meaningfully higher aggregate costs to the consumer,” according to Canaccord Genuity analyst Aravinda Galappatthige, “which may not necessarily be palatable.”

Despite growth in Shaw’s wireless business, the company’s profit was still down in the fiscal fourth quarter. Shaw said it earned $167-million, or 32 cents a share, down from $196-million the year before. Shaw said the decrease in profit is because of lower equity income associated with its investment in Corus Entertainment Inc. and gains on asset sales in fiscal 2018. (Shaw sold its shares in Corus in May.) Revenue for the quarter totalled $1.35-billion, up 1.9 per cent, helped by the wireless business.

Analysts were generally positive on the company’s guidance for fiscal 2020, which includes $700-million in free cash flow, helping to bring “more stability” to Shaw, according to Scotia Capital Inc. analyst Jeff Fan.

Meanwhile, Shaw continues to face challenges in its much larger cable division as it loses television subscribers. The company lost roughly 54,400 subscribers in the division last quarter, but added 11,400 internet customers. Revenue was down 1.5 per cent to approximately $1.1-billion while operating income before restructuring costs and amortization fell 6.6 per cent to $483-million compared with the same period last year. 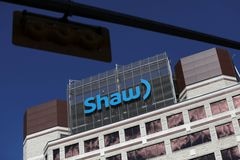