Innovation, Science and Economic Development Canada (ISED), the federal ministry that regulates spectrum, has published a list of companies that have applied to participate in the June 15 auction of 3,500-megahertz spectrum – airwaves that will be critical for providing fifth-generation wireless services.

Shaw is absent from the list. The Western Canadian cable operator owns Canada’s fourth-largest wireless carrier, Freedom Mobile, as well as the Shaw Mobile brand in Alberta and British Columbia.

The auction is expected to shape the future of Canada’s wireless industry, as the airwaves can carry large volumes of data over long distances.

“Given [Shaw] was the most obvious buyer for set-aside spectrum in B.C., Alberta and Ontario, we believe that the company opting out of the process opens the door for smaller companies to bid on valuable set-aside spectrum while facing less competition,” Desjardins analyst Jerome Dubreuil said in a note to clients.

“One of these companies is [Quebecor], which was vocal last week about its interest in operating [Shaw’s] wireless assets if [Rogers] divests them – under certain conditions,” Mr. Dubreuil added.

Pierre Karl Péladeau, president and CEO of Quebecor, hinted to members of Parliament during a hearing into the Rogers-Shaw merger last week that his company would be interested in acquiring Freedom, which operates in Ontario, Alberta and B.C.

Cogeco, which has previously expressed interest in getting into the wireless business if the Canadian Radio-television and Telecommunications Commission (CRTC) forces national carriers to open up their networks to resellers at mandated rates, has also applied to take part in the auction. The CRTC is currently mulling whether to mandate access for mobile virtual network operators, or MVNOs, with a decision expected in the coming weeks.

“Cogeco applied before knowing the CRTC MVNO decision but if the MVNO decision is not favourable, it could always drop out before the auction starts on June 15,” Scotiabank analyst Jeff Fan said in a note to clients. “Hence, we think the CRTC will be issuing its decision well before June 15.”

Gregory Taylor, a spectrum expert and associate professor at the University of Calgary, cautioned that some smaller players may be participating in the auction as spectrum speculators, rather than with the aim of offering services. Under the current rules, companies that buy spectrum that is set aside for new entrants, which is typically available at much lower prices, are able to resell those licences after five years.

“They could just be getting some valuable spectrum at cut-rate prices and hoping to flip it in five years, which doesn’t benefit anybody,” Mr. Taylor said. “I think ISED will have to be very careful that we’re not seeing bargain hunters here right now.”

The Globe and Mail previously reported that Bell Canada, Telus Corp. and at least two other telecoms have pressed Ottawa to bar Shaw from participating separately from Rogers in the auction, in light of their proposed merger, which is valued at $26-billion including debt.

The rival telecoms said in letters to ISED that the ministry’s own rules state that companies in an agreement to merge are considered associated entities and can only participate independently in the auction if they can prove to the government that they plan to provide services separately. Rogers and Shaw fail this test because they plan to operate as a single entity after they have merged, the rival telecoms argued.

Shaw declined to comment on how sitting out the auction could affect its wireless business if its deal with Rogers falls through. Rogers also declined to comment, citing auction rules. The acquisition is subject to approval by ISED, the Competition Bureau and the CRTC. At a hearing on Wednesday, Commissioner of Competition Matthew Boswell told members of Parliament that the Bureau will be “very thorough” in reviewing the deal.

BMO analyst Tim Casey said that Shaw’s absence from the list of applicants demonstrates the company’s commitment to its deal with Rogers. “Should the deal fail to materialize, Shaw would be left without critical mid-band spectrum needed to deliver competitive 5G services,” Mr. Casey said in a note to clients. 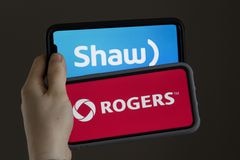 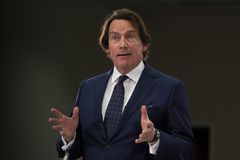 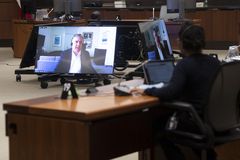