Shell Canada plans to capture more pollution at its Scotford refinery complex near Edmonton, the company’s latest move to convince the public and shareholders it is serious about reducing its greenhouse gas emissions.

The proposed Polaris carbon capture and storage (CCS) facility is part of a suite of projects the company is eyeing at the site to help lower emissions, including a new solar installation coming online later this year and, down the road, potentially producing hydrogen with renewable power.

Shell’s Quest CCS project, also at Scotford, has already captured and stored more than six million tonnes of carbon dioxide during its six years in operation. Susannah Pierce, who took the reins as Shell Canada president in April, says Polaris will play a key role in the company’s goal to hit net-zero emissions by 2050.

Shell has “a pretty aggressive goal with respect to carbon capture sequestration, which clearly is something that we need for projects or investments or assets that really can’t eliminate emissions on their own,” Ms. Pierce said in an interview Monday.

The initial phase of the new CCS project is expected to start operations around the middle of the decade, subject to a final investment decision by Shell in 2023. That first phase will capture and store about 750,000 tonnes of carbon dioxide a year, reducing direct and indirect emissions by up to 40 per cent from the refinery and 30 per cent from the chemicals plant.

The second phase of the project would create a CO2 storage hub to store emissions from other companies, further lowering discharges in the oil and gas sector.

Ms. Pierce succeeded Michael Crothers as president when he retired, and she is still getting up to speed on the company’s priorities and how to apply its net-zero strategy.

Donning her other hat as general manager of renewables and energy solutions, she’s also focused on how to fold greener options – including hydrogen and renewables – into the mix to help lower emissions from the start of the energy supply chain through to end use by customers.

As a woman leading one of Canada’s largest integrated energy companies, Ms. Pierce said promoting equity, diversity and inclusion will also be core to her new role. That means inside Shell, but also “How are we acting as a positive force of change in this space? How are we promoting diverse industries? How are we promoting a relationship with Indigenous communities?” she said.

Ms. Pierce acknowledged there is some public cynicism about Shell’s commitment to lowering emissions and addressing climate change.

“There’s always going to be those who will never believe what you say, and that’s fair. We’re an old company that has had a history of energy production – of oil and gas,” she said.

But Ms. Pierce rejects the charge that Shell is greenwashing. She points to the company’s public clean energy transition strategy on which its shareholders voted, Shell’s commitment to update them every two years on progress toward those goals, and tying top executive compensation to the targets.

“We’re holding ourselves accountable to our shareholders and the board. If we fail to deliver, well, then we have to come to terms with that when we meet every year at our AGM,” she said.

While the International Energy Agency says all options for lowering emissions must be on the table for the world to reach net zero, environmental groups are often leery of carbon capture.

The federal government is in the midst of consultations to develop a CCS tax credit, due to start next year. But in March, a group of 47 environmental, health and human-rights organizations penned a letter to Ottawa opposing subsidies or any such tax credits, arguing the technology actually increases oil production, thus increasing the total output of CO2.

Carbon capture is one of several opportunities Shell is eyeing for Scotford to reduce emissions and meet what the company believes will be strong future market demand for differentiated, low-carbon fuels.

Along with use of more renewables onsite, it’s also in the early stages of figuring out if it could produce green hydrogen at the complex, which is made through electrolysis powered by renewable energy. Earlier this month, Shell started up Europe’s largest hydrogen electrolyzer of its kind at an energy and chemicals park in Germany.

“Shell actually sees that the hydrogen market could grow close to 50 per cent of today’s oil demand by 2050, so we see a huge opportunity to grow it, primarily looking at the harder-to-abate sectors,” Ms. Pierce said. 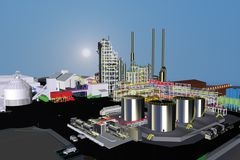 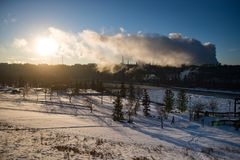