Shell Canada Ltd. has mapped out plans to tap into its vast reserves of natural gas in northeast British Columbia to help supply a proposed terminal on the West Coast for exports.

“We can expand Groundbirch to some degree if necessary to help us provide even more gas,” Michael Crothers, president of Calgary-based Shell Canada, said in an interview.

Shell owns an 80-per-cent stake in the Groundbirch natural-gas play while the remaining 20 per cent is held by PetroChina, which acquired its interest in 2012.

The Groundbirch reserves in northeast B.C. are massive, with industry estimates saying they will last more than 35 years based on existing production levels.

Shell also holds 50 per cent of LNG Canada. South Korea’s Kogas and Japan’s Mitsubishi Corp. each have a 15-per-cent stake, while PetroChina owns a 20-per-cent interest in the LNG consortium.

Another important source of natural gas will be the Cutbank Ridge play in northeast British Columbia. Encana Corp. holds a 60-per-cent stake in the Cutbank Ridge joint venture, with Mitsubishi owning 40 per cent.

At Groundbirch and Cutbank Ridge, producers fracture rock in a high-pressure process to free the “tight gas.”

Mr. Crothers said LNG Canada’s first phase will rely primarily on natural gas from Groundbirch and Cutbank Ridge, plus smaller contributions from Kogas. Phase one in Kitimat will have two “trains,” or separate LNG cooling processes. Each train is being designed to handle 6.5 million tonnes a year of LNG exports to Asia, for a total of 13 million tonnes annually in the first phase.

A relatively small amount of natural gas would be accessed through the open market. “Shell is a very big gas trader. Our people are able to access all manner of contracts from individual producers or from the market broadly,” Mr. Crothers said. “Our trading team would construct the most effective sourcing strategy for the remaining small amount of volume that we would need.”

In total, LNG Canada’s construction costs would be up to $40-billion, including the Kitimat export terminal and TransCanada Corp.’s proposed $4.7-billion Coastal GasLink pipeline from northeastern British Columbia to Kitimat.

Shell Canada, wholly owned by Anglo-Dutch energy giant Shell, and the three Asian co-owners of LNG Canada could make a final investment decision by the end of 2018, aiming to complete construction of the first phase in late 2023.

LNG Canada officials welcomed the BC NDP government’s proposals unveiled on March 22 – including sales-tax relief for construction and the elimination of specific income tax on the industry – designed to bolster LNG prospects in British Columbia.

But a major hurdle remains for LNG Canada, which has asked the federal Finance Department to exempt the B.C. project from anti-dumping duties of up to 45.8 per cent on imports of fabricated industrial steel components.

LNG Canada, which would assemble made-in-China modules in Kitimat, is seeking tariff relief by applying for a “remission order” from Ottawa.

The Canadian Institute of Steel Construction is worried about unfair foreign competition. But the Canadian Association of Petroleum Producers is urging Ottawa to remove the duties, arguing that Canada’s steel sector stands to be helped and not harmed by B.C.’s fledgling LNG industry.

“Thousands of tonnes of domestically sourced reinforcing steel would be needed for the concrete in Canadian LNG facilities,” according to a March letter sent by CAPP to federal Finance Minister Bill Morneau.

The letter, obtained by The Globe and Mail, is signed by CAPP CEO Tim McMillan and 15 executives of energy companies, including Mr. Crothers and Mr. Tonken.

“By working together, we believe we can develop a solution that addresses our concerns to the mutual benefit of Canada’s steel, and oil and natural gas sectors,” they told Mr. Morneau. 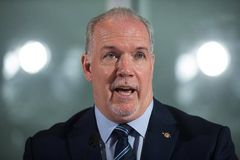 BC Greens back off threat to topple NDP government over LNG plans
March 22, 2018 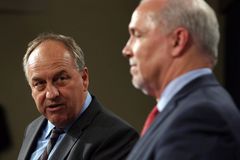