A showdown in the Quebec legislature over the future of La Presse, the Montreal French-language digital news outlet, has cast doubt on a plan to transform one of the country’s oldest daily news organizations into a non-profit.

On one side are the publisher’s executives who ultimately want to convert the company to a registered charity, which could provide some relief from the financial strains that have beleaguered the Canadian news industry.

But La Presse first needs approval from the provincial legislature. And there are skeptics in Quebec’s National Assembly who are raising questions about La Presse’s finances, its governance, whether its employees’ jobs will be secure, and the publication’s connections to the billionaire Desmarais family, who have owned it for more than 50 years.

Martine Ouellet, an independent member of the National Assembly, shot back, saying she and her colleagues were not La Presse’s “puppets.”

The countdown for a resolution is on, with the current legislative session – the last before an October general election – scheduled to end on Friday. After that, the bill now being debated would not be revisited for several months – time that La Presse says it simply does not have.

Last month, La Presse announced that it intended to split away from the Desmarais family, ending a 50-year relationship with a promise to contribute $50-million to the foundation set up to own the news outlet.

In addition to losing its wealthy benefactor, the move set La Presse on a course largely uncharted in Canada: news publishing as charity. The idea is that donations can form the basis for a new stream of revenue in an industry that has had difficulty finding a sustainable financial model in the digital age.

With severe losses to advertising and circulation revenue crippling many metro dailies across the country, philanthropy is an untapped potential source of financial relief for Canadian news publishers struggling to plug budget holes, La Presse included.

“I think there is money in Quebec to support La Presse, from the general public, from large companies, from significant donors,” Mr. Levasseur said. “The model has to change. The status quo is just not working.”

La Presse stopped being a newspaper in the traditional sense when it killed off its print edition last year to concentrate exclusively on distributing its news through digital platforms, primarily its iPad app. Now it also wants to leave behind the business model that has sustained newspapers in Canada for well over a century.

Although journalism has not been one of the traditional avenues for charitable giving in Canada, the federal government has recently indicated it is open to considering new business arrangements for media organizations.

“This could include new ways for Canadian newspapers to innovate and be recognized to receive charitable status for not-for-profit provision of journalism, reflecting the public interest that they serve,” the 2018 federal budget said.

Changing the charity laws to enable philanthropic support for journalism was one of the recommendations of Shattered Mirror, a report on the future of Canadian media written by Edward Greenspon, a former editor-in-chief of The Globe and Mail.

Charitable status would allow a media organization to solicit donations in the same way as any other charity and to issue receipts that donors could use to claim tax credits.

For La Presse specifically, the first step toward a philanthropic structure is the repeal of a private law requiring legislative approval for a change in the paper’s ownership. That law was adopted in 1967, the year Paul Desmarais Sr. acquired the paper.

The Quebec Liberal government supports the change in law, but the repeal requires unanimous approval, including from independent MNAs. That gives Ms. Ouellet, who says she still has unanswered questions about La Presse’s finances, an effective veto.

Mr. Crevier stressed to the committee considering the bill that a not-for-profit structure , combined with the cash on offer from Desmarais-controlled Power Corp., is needed to “save La Presse.”

Across Canada, the business of producing and distributing news has been thrown into disarray over the last decade, as U.S. tech giants have come to dominate digital advertising.

With deep wells of personal user data, the likes of Facebook and Google can offer the kind of precise targeting advertisers crave over the mass distribution of traditional media. As a result, those two companies alone pocket at least two-thirds of the digital advertising spend in Canada, according to the Shattered Mirror report.

La Presse does not divulge its own finances, and Power Corp. has never split out the newspaper’s performance, but rumours of steep annual losses were dismissed by Mr. Crevier as “folklore” at a recent news conference.

With advertising revenue currently at about two-thirds of 2010 levels, La Presse says its own ad losses have been much less severe than those of some large public media groups. “Is that enough to support a newsroom the size of La Presse? Maybe not. That’s why we need to go seek other sources of revenue,” Mr. Crevier said.

Different pools of donors could be targeted in different ways under a charitable model.

British news outlet The Guardian, for example, has reportedly raised millions by asking readers to pay as little as £5 ($8.70) a month. For decades, The Guardian has been supported by a charitable trust designed to help fund the paper’s operations “in perpetuity.” Small gifts from readers are meant to reduce the toll of annual operating losses on the trust.

La Presse says it thinks it could raise about $3-million each year in a similar way. And that’s not counting larger donations from foundations, corporations and wealthy individuals.

In Canada, there is no newspaper with a longer history of philanthropy than Le Devoir. The paper’s not-for-profit group, Friends of Le Devoir, which raised $600,000 last year, was established in its original form in 1915 to help the paper survive an early brush with death.

“Every time things are not going well at Le Devoir, we turn to our readers in the French-speaking community and ask for help,” said Brian Myles, the newspaper’s publisher. Support comes from online campaigns seeking small monthly donations, as well as larger contributions through more targeted, personal appeals.

And it’s the bigger donors who want that tax receipt. “If you want to go beyond the $25,000 threshold, for instance, it becomes an issue,” Mr. Myles said, adding that charitable status could see the paper’s donations quickly double.

But counting on fundraising to fill large gaps in a budget is probably too optimistic, said Michel Nadeau, executive director of Montreal’s Institute for Governance of Private and Public Organizations. “It’s very difficult to get something like $10-million from a corporation or a wealthy family. And they would have to get it every single year.”

For gifts of that magnitude, journalism is a tough sell against the likes of children’s hospitals and cancer researchers, Mr. Nadeau said.

Large donors are not typically enthusiastic about supporting operating costs at organizations that are losing money, said news-industry analyst Ken Doctor of Newsonomics. “They see it as a money hole.” Big donations are more often aimed at specific projects providing some sort of social good, Mr. Doctor said.

The Globe and Mail currently has an application before the federal government proposing the establishment of a charitable foundation that could receive gifts to support certain journalistic pursuits.

“I’ve had individuals and foundations in Canada who’ve approached me and said they think there should be more of this kind of journalism – say, environmental journalism,” said Phillip Crawley, publisher of The Globe and Mail.

“But they won’t do it until they know they can get a tax receipt,” Mr. Crawley said. Unlike La Presse’s plan, The Globe is arguing that this model fits into the existing charity laws, as a not-for-profit foundation with an educational mandate.

These kinds of options are likely now being discussed in newsrooms across the country, Mr. Greenspon said. “A lot of people are going to be exploring philanthropic models, for sure.”

With reports from Nicolas Van Praet in Montreal 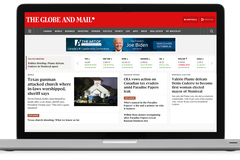 Opinion
Are Quebec media slightly ahead of our time?
May 19, 2018 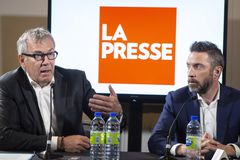