Google affiliate Sidewalk Labs laid out more details Friday about the technology it wants to deploy on its 12-acre project in Toronto, but held back from revealing specific costs to implement and maintain it.

Across the nearly 500 pages of Sidewalk’s new “digital innovation appendix,” the Alphabet Inc. subsidiary proposes that its new innovations could ultimately lower the costs of running and living in the community. But it does not outline what additional burden taxpayers might shoulder to maintain dozens of new city-oriented technologies there in the years to come.

While the document details different scenarios for private or public ownership for some technologies, such as plug-and-play sensor connectors called Koala, it suggests that the public ownership would include upfront costs, maintenance contracts and annual software payments – although it offers few dollar figures.

Sidewalk had announced Koala and other innovations previously, but offered more specifics in Friday’s appendix, such as details about self-driving waste bins that would connect to its centralized freight-and-waste system. This and other planned site-wide plans, including energy-efficient building-monitoring systems and neighbourhood-wide internet access, could also come with long-term software or maintenance costs.

Sidewalk won a contract from Waterfront Toronto, the tripartite government agency overseeing lakeshore development, to create a 12-acre community called Quayside two years ago. The appendix is designed for the public agency’s panel of digital strategy advisers to review to determine what it would allow in the community, should it go ahead. The document also responds to concerns that have arisen over the past two years by promising a community that would include government oversight, provide clarity on how data would be collected and used, and assure all members of the public would benefit from its technology.

Details could still change as Waterfront Toronto, Sidewalk’s government partner to develop the Lake Ontario community, spends the next five months analyzing details and consulting the public before a final vote next March on whether to proceed.

Many of the promises and innovations in the appendix have already been proposed in less detail in Sidewalk’s draft master plan this past June. The scope of that 1,500-page plan was far beyond what Waterfront was willing or able to let Sidewalk execute, though, including a proposal to deploy technology on a site 16 times larger than Quayside. After months of tense talks, Waterfront Toronto eventually convinced Sidewalk to agree to a 12-acre project last month, with greater control of project details and data in government hands.

The company also promised Friday not to include facial-recognition technology in the community and gave greater detail about a venture fund to invest in Canadian technology, about which The Globe and Mail reported details in October.

Jesse Shapins, Sidewalk’s director of digital innovation and urban design, said if the project moves forward after March, “increases in levels of detail, the nuances and detail of costing and the considerations of exactly how that would work would come into greater focus.”

One of the digital strategy advisers who will assess the appendix, University of Toronto professor emeritus Andrew Clement, said he believes that long-term software and maintenance costs for proposed technologies “will likely be quite expensive,” and will need careful consideration before proceeding. He cited Ottawa’s troubled Phoenix payroll system as an example of software whose costs could unexpectedly balloon.

He also worried that the panel does not have enough time to fully review the many hundreds of pages of digital policy it now has.

The new appendix outlines 18 major services for the community, split into 52 different examples; Sidewalk says it would anticipate only building a quarter of these. Of those 52 subsystems, it says more than half will not collect citizens’ personal information, such as an underground pneumatic-tube waste-sorting system or demand-based electricity pricing software. But others, such as energy-use monitoring, could collect data about residents or visitors on a granular level.

The appendix outlines a home-energy scheduler to reduce bills by automating devices such as dishwashers to run at lower-price times. It also proposes a mobility subscription service that would bundle transit and bike-share passes with credits toward ride-hailing and car-sharing providers.

Sidewalk also details a “privacy preserving” credential system for citizens’ devices that would allow them access to public spaces and services, and that would let people control how much data they provide to the community. One use case they suggest is to verify a person’s income level when seeking affordable housing.

While Sidewalk says it would share de-identified data to foster innovation, the appendix authors wrote that “personal information collected ... would not be used for surveillance purposes, sold to third parties, or used for advertising.”

Waterfront Toronto spokesperson Andrew Tumilty said that cost projections would be a key consideration in giving the project a final go-ahead. “Waterfront Toronto is well aware of our obligation to protect the public interest,” he wrote in an e-mail.

Thorben Wieditz, of the opposition #BlockSidewalk group, said that cost details should have been made public in the June draft master plan. And after watching Sidewalk release yet another 500 pages of information for Waterfront and the public to digest, he said, “it doesn’t look like Waterfront Toronto is really back in control" after the October decision to proceed.

Waterfront digital strategy adviser Mark Wilson, a former IBM executive, said he felt satisfied the agency was now leading the process and looked forward to reading the appendix in depth. The unknown tech life-cycle costs, he said, are something that his panel “has always said we really need to look at." 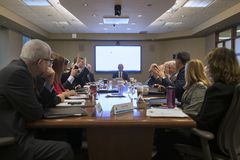