SNC-Lavalin Group Inc. has won a judge’s blessing to sell a $3.25-billion stake in Ontario’s Highway 407 toll road to the Canada Pension Plan Investment Board, giving investors more comfort that it can fulfill its plan to pay down debt.

But the legal go-ahead is just one of many hurdles the beleaguered engineering company needs to overcome to repair its reputation and win new business while it faces criminal charges. Much bigger challenges include limiting losses on its remaining fixed-price contracts and proving that a recent profit drop in its consulting and nuclear business, on which it has pinned its future, was a blip.

SNC-Lavalin said on Wednesday it will move ahead with the sale of the 10.01-per-cent stake in Highway 407 with the Canada Pension Plan Investment Board (CPPIB) after an Ontario Superior Court judge dismissed a legal challenge to the deal by Cintra Global, a subsidiary of Spanish multinational Ferrovial SA. The decision came after an accelerated arbitration process.

The sale should close within the month, and will stand if the decision is appealed, SNC said in a statement. If an appeal were successful, CPPIB and Cintra, the current shareholders of the 407 together with SNC, would adjust the number of shares between them, the engineering firm said.

Shares in SNC-Lavalin shot up 6 per cent to close at $17.35 on the Toronto Stock Exchange, reversing a four-day slide. The company has lost two-thirds of its market value over the past year amid legal and operational issues, and investors have been seeking certainty on the 407 sale.

“The longer the arbitration process went, the more investors were worried the sale could be delayed and delayed into 2020,” said Derek Spronck, an analyst at RBC Dominion Securities. “The risk of that is that until SNC actually gets the proceeds from the … sale, they would be breaching their bank covenants and would continue to need flexibility from their lenders.”

On April 5, SNC announced a deal to sell the 407 stake to the Ontario Municipal Employees Retirement System (OMERS) for $3-billion in cash and as much as $250-million in payments over 10 years. SNC plans to cut debt, including paying $600-million on a $1-billion loan from its largest investor, the Caisse de dépôt et placement du Québec.

In May, CPPIB and Cintra both claimed rights as existing 407 shareholders to match the OMERS offer. And that complication put the timing of the sale into question.

SNC-Lavalin maintained that CPPIB was legally entitled to exercise its right of first refusal and Cintra was not. SNC said in court filings that Cintra signed an agreement in 2002 that waives its matching rights in the event SNC sells shares to a buyer who "does not have competing interests” with Cintra on infrastructure projects, except as a financial investor.

SNC ended its agreement with OMERS and paid a break fee of about $81-million. Even though OMERS is no longer involved, the judge still had to decide whether it was a competitor to Cintra under the language of the 2002 waiver. Cintra had argued that it is, but the judge concluded it is not.

Much of SNC-Lavalin’s market value has been underpinned by its stake in the 407, which stretches from Burlington to east of Oshawa and allows paying motorists to bypass the area’s more congested arteries. It is a money machine for its owners.

The planned sale would leave SNC with 6.8 per cent of Highway 407 and give CPPIB a narrow majority stake of 50.01 per cent. The current ownership structure is CPPIB with 40 per cent of the common shares, Cintra with 43.2 per cent and SNC with 16.8 per cent.

But the company has bigger problems than the 407 case.

Under interim chief executive Ian Edwards, SNC is getting out of fixed-price construction work (what it calls lump-sum turnkey contracts) to focus on more fee-for-service consulting and nuclear work. Lump-sum contracts, in which builders are responsible for cost overruns, have been “the root cause” of the company’s recent financial performance issues, Mr. Edwards has said.

The CEO has tried to reassure stakeholders his team has a good handle on the remaining $3.4-billion worth of fixed-price work. But he has not provided a worst-case estimate for potential future losses, and that has driven investors’ worries about the company’s cash flow and and earnings this year and next.

“We should stress that of the five fixed-price projects wreaking havoc in the [most recent] second quarter, four have yet to reach substantial completion,” Raymond James analyst Frederic Bastien said. These include Montreal’s Champlain Bridge and Ottawa LRT projects as well as two unidentified resources contracts, he said.

SNC has taken losses of nearly $750-million this year related to its fixed-price contract backlog, and the company’s shares are trading at levels that suggest investors expect at least $1-billion in additional cash losses, according to Veritas Investment Research analyst Dimitry Khmelnitsky. The analyst’s own research pegs SNC’s future losses on remaining fixed-price contracts at $650-million, with $300-million of additional restructuring charges. 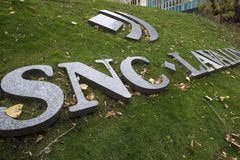 Opinion
Is ‘cure’ for SNC-Lavalin woes worse than its disease?
Subscriber content
August 6, 2019