SNC-Lavalin Group Inc. is looking for a new strategy under new leadership after a series of setbacks in Canada and abroad that have threatened its future and crushed its stock price.

Neil Bruce, chief executive of the engineering and construction company for the past four years, is leaving and will return to his native U.K., the company said in a statement Tuesday. The board of directors is handing his replacement a mandate to quickly develop a new strategy that lowers risk. Mr. Bruce’s interim replacement will be infrastructure expert Ian Edwards, who has been SNC’s operations chief since January.

Opinion: Neil Bruce’s time was up at SNC-Lavalin

The company has faced pressure on several fronts since last October, when it announced it would not be invited by federal prosecutors to negotiate a deal to settle bribery and fraud charges over its past business dealings in Libya. Mr. Bruce came into the national spotlight after the company’s effort to win a settlement, called a deferred prosecution agreement, hit a wall and spiralled into a political crisis for the Trudeau government. Accusations that officials in the Prime Minister’s Office had put pressure on then-attorney-general Jody Wilson-Raybould to order a deal for the company led to the resignation of the country’s highest-ranking bureaucrat and of Prime Minister Justin Trudeau’s principal secretary.

The case is now headed to trial after a judge ruled last month there was enough evidence to proceed. SNC-Lavalin has said it will plead not guilty. Mr. Bruce has lamented that the company is still under a legal cloud given the charges involve events that happened more than eight years ago, before he joined SNC.

The board has asked the interim CEO to develop a plan that “de-risks and simplifies” the business model and generates consistent earnings and cash flow, SNC said.

Mr. Edwards will spend the next 60 days meeting with key stakeholders to get their views on the situation, the company said. SNC’s major investors include pension fund manager, Caisse de dépôt et placement du Québec, and Royal Bank of Canada, which this week boosted its position in the company to 16.6 per cent, according to regulatory filings. Caisse spokesperson Maxime Chagnon declined to comment. Gillian McArdle, a spokesperson for Royal Bank, also declined to comment.

SNC has not ruled out any options on its future direction but has said it wants to maintain its strong presence in Canada if possible. Some investors have said there could be more value created by spinning out some of its assets as separate companies while at least two analysts have called for a more surgical solution that would see it exit certain business lines such as building infrastructure.

For SNC-Lavalin, the fallout from the political crisis has been compounded by trouble with its operations, including a costly feud with Chilean miner Codelco.

The pressure rose to a boil in the late winter and early spring after SNC issued two profit warnings in quick succession and said its business prospects in Saudi Arabia have deteriorated amid Canada’s diplomatic row with the kingdom. S&P Global ratings subsequently cut SNC-Lavalin’s credit rating to the cusp of junk and Codelco pulled the plug on the disputed contract.

Mr. Bruce’s tenure was marked by the purchase of British engineering firm Atkins in 2017, a transformative acquisition that allowed SNC to widen its geographic footprint and increase consulting revenue. He also cemented the company’s backlog of work to more than $15-billion, saying he wanted SNC to become the world’s biggest engineering and construction company.

That goal is now little more than a memory after the onslaught of challenges SNC has faced in recent months. Even a plan to sell a 10-per-cent stake in Ontario’s Highway 407 toll road, which would help repair its heavily indebted balance sheet, went awry. The deal is still not finalized because the current shareholders are fighting over their rights to buy the engineering company’s share.

As investors lost confidence and the political controversy swirled, the company’s share price suffered. It closed Monday at $23.70, a 61-per-cent decline over the past 12 month. The stock gained nearly 7 per cent Tuesday on optimism that SNC will now make a decisive change in a direction that will improve its finances.

The company has formed a special committee of directors to weigh options in the event the legal battle drags on. It has not provided many details about the committee other than to say it is examining all avenues. That effort is separate from the strategic analysis Mr. Edwards will now do to try to repair the damage and set a new course for the company, SNC spokesman Nicolas Ryan said.

“[Is this a] glimmer of hope?” National Bank of Canada analyst Maxim Sytchev asked in a research note Tuesday. “We applaud the company’s review of strategic emphasis that appears to prioritize consistency and cash flows.”

Mr. Sytchev has outlined his own road map for SNC-Lavalin, one that has the company selling its resources and construction units to focus on consulting and nuclear engineering work. “If the company itself cannot get there, a privatization should also be strongly considered,” he said.

Yuri Lynk, an analyst at Canaccord Genuity, has also floated the idea of SNC-Lavalin exiting the construction business. The risk assumed by the company when it executes construction work has contributed to eight consecutive years of negative free cash flow, according to the analyst. That is weighing on its stock even more than the legal issues, he said.

Focusing on engineering services and exiting construction would affect the company’s infrastructure segment most, Mr. Lynk said. The infrastructure segment generated more than 65 per cent of its revenue in Canada in 2017, from projects such as Montreal’s new Champlain Bridge and Toronto’s Eglinton LRT, he said.

While it remains unclear how political leaders would react if SNC-Lavalin decided to end its construction activity, the impact on Canadian jobs would likely be minimal. The company said in a 2017 investor presentation that it employs fewer than 500 people in construction roles in Canada and that it subcontracts almost all the work. Most of its work force is dedicated to engineering.

Speculation that Mr. Bruce was on the verge of leaving the company or running it primarily from London intensified earlier this year amid a media report that he and his wife had sold their house in Montreal for $3.3-million. His wife and daughter moved back to London, where the family owns a house, he told The Globe and Mail in an interview in March, but he denied any change was imminent.

“I don’t think about quitting, no, because there is a determination to succeed,” he said at the time. “We’ve got fantastic businesses ... 90 per cent of the businesses are really, really good.”

Opinion
Neil Bruce’s time was up at SNC-Lavalin and the new boss needs a new strategy Subscriber content
June 11, 2019 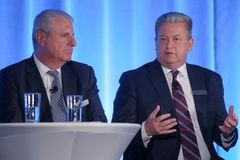