South Africa’s Finance Minister has revealed that the country’s debt is soaring much faster than expected, triggering a plunge in its currency and sparking fears of another downgrade in its credit rating.

South Africa, the most industrialized economy in Africa and one of the biggest on the continent, is suffering from slumping growth, electricity shortages, rising unemployment, revenue shortfalls and a massive US$31-billion debt at its electricity monopoly.

“Our national debt is increasing at an unsustainable pace,” Finance Minister Tito Mboweni said in a mini-budget on Wednesday.

Failure to solve the debt problem “would be gravely negative for South Africa,” he said. “The country would likely face mounting debt-service costs and higher interest rates and may enter a debt trap.”

After projecting growth of 1.5 per cent in February, the forecast has been slashed to just 0.5 per cent. Growth has remained below the rate of population growth for the past five years, meaning that per-capita income is declining.

In a separate document, the Treasury Department warned that South Africa’s debt could climb above 80 per cent of gross domestic product (GDP) within a decade. Four years ago, the debt was less than 50 per cent of GDP, and the government had been hoping to stabilize it at 60 per cent in the next few years, but that goal now seems impossible.

The budget deficit, too, is soaring faster than expected. Just eight months ago, the government was forecasting a deficit of 4.7 per cent of GDP this year, but now the deficit is projected to be 5.9 per cent this year and more than 6 per cent next year. With the economy weaker than hoped, state revenue will be 4 per cent less than forecast this year.

Mr. Mboweni identified some of the main causes of the debt crunch: fast-rising government salaries and the spiraling debts of the electricity utility, Eskom, and the state airline, South African Airways. But he provided few details of how those issues would be tackled, instead promising a plan in his main budget in February. The delay could be a sign of continuing indecision over whether to tackle the powerful unions that represent state workers.

Mr. Mboweni had been expected to unveil a plan for debt relief at Eskom. But instead, he demanded new efficiencies and cost savings from the utility. “We cannot continue to throw money at Eskom,” he said.

South Africa’s currency, the rand, immediately lost more than 2 per cent of its value against the U.S. dollar, dropping from 14.6 to about 15 rand to the dollar.

South Africa’s latest debt and deficit projections are more pessimistic than many analysts had expected and are likely to increase the risk that Moody’s will give the country’s credit rating a “negative” outlook when it releases its latest assessment of South Africa on Friday.

After years of economic stagnation under the corruption-riddled rule of former president Jacob Zuma, the country had been hoping for faster growth under new president Cyril Ramaphosa, who replaced Mr. Zuma last year. But instead, South Africa has struggled through another year of agonizingly slow growth, high unemployment and frequent electricity shortages.

Business confidence levels have sunk to their lowest levels since the late 1990s, according to indexes measured by local banks and economic analysts.

South Africa’s unemployment rate has climbed to 29.1 per cent, the highest in more than 11 years, according to data released this week. When the definition is expanded to include discouraged workers who have abandoned the search for jobs, the unemployment rate is at 38.5 per cent.

The electricity blackouts, known euphemistically as “loadshedding,” are inflicting heavy damage on the economy. Rolling blackouts have been imposed several times this year.

Earlier this week, public-enterprises minister Pravin Gordhan announced the first steps in a plan to restructure Eskom. A new subsidiary for electricity transmission is to be created by next March, and coal-fired plants will be grouped into several clusters that will be encouraged to compete for efficiency and cost savings. But the government, for political reasons, has been reluctant to take any steps that could be interpreted as privatization at Eskom, and critics say the latest plan is too slow. 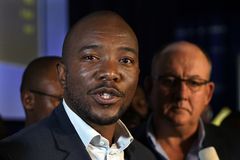