A fleet of boxy robots the size of small dishwashers whiz to and fro along a lattice of metal tracks, pausing frequently to hoist plastic bins full of grocery items from a vast storage grid beneath them. The robots glide from square to square on a surface the size of 43 basketball courts, constantly rearranging the bins. This is the “hive,” and it is the centrepiece of Empire Co. Ltd.‘s $200-million investment in its new e-commerce service, Voilà.

On Monday, after weeks of testing that began in late April, Voilà will go live for customers in the Greater Toronto Area. Empire’s Sobeys banner is launching the service at a time when the COVID-19 pandemic has accelerated customer demand for e-commerce.

The company anticipates demand right out of the gate will be three times greater than what it initially expected. Empire had planned to launch with 40 delivery staff; it has hired 140 instead. It is starting with 100 delivery vans and has already placed an order to double that over the next few months. Each truck has room for about 20 customer orders at a time, and Empire expects to eventually have 400 to 500 vans on the road in the GTA.

“We had a pretty aggressive plan, but we thought it might take a while for people to find us,” Empire chief executive Michael Medline said during a recent tour of the new 250,000-square-foot distribution centre in Vaughan, Ont., north of Toronto. “It’s probably going to be three times as fast as we had expected. … We’re looking at how quickly we can expand to other markets in Canada as well. That will accelerate. … Where the population will support it, we’ll speed up putting [fulfilment centres] across the country.”

The first orders will be delivered to customers near the massive facility, with availability rolling out across the rest of the GTA over the summer. The building was completed just before COVID-19 halted many construction projects. There have been delays at a second facility in Montreal, which will power Voilà under Empire’s IGA banner in Quebec. Each distribution centre represents an investment of at least $100-million.

The robotic technology is powered by Ocado Group PLC, which operates its own e-commerce service in Britain and partners with other grocers on facilities around the world. Empire has an exclusive deal with Ocado in Canada.

“I could watch them work all day,” said Sarah Joyce, Sobeys senior vice-president of e-commerce, as Ocado’s robots skim along the tracks, green beacons blinking as they work. “Where else could you find that type of productivity? They don’t stop.”

The robots take 10 commands per second via antennae that hook them to a computer system helmed by Ocado engineers. At their quickest, they move at four metres a second, passing within millimetres of each other. They sense when their batteries are low and take themselves to charging stations.

There are separate “hives” for products stored at room temperature, and those that have to be kept chilled or frozen. The delivery service is launching with 10,000 products available, but the Vaughan facility has the capacity for nearly 40,000. It also has room for three times the number of robots.

Before the robots do their work, humans receive shipments at the warehouse – pallets full of lettuce or cereal or other items – and unpack them, entering each item into the computer system and loading them into smaller bins. The robots then reach down through a chute and pull the bins into the hive. At this warehouse, Ocado’s robots never touch the groceries themselves; only the bins. When an order comes in, the robots find the right bins containing each product and send them back down to another station. There, humans bag up the orders and place them in separate bins on racks to be loaded onto the Voilà trucks, which have room-temperature as well as chilled sections.

Some automation is common at retail warehouses, but according to Ms. Joyce, it is mostly for moving larger pallets of products. By contrast, the Ocado bots sort smaller bins full of products for customer orders at much greater speed and complexity than human pickers could do. The system can process a 50-item order in less than five minutes.

“It really is the most efficient, which is why we can get to sustainable economics. It’s a system that was built to scale,” Ms. Joyce said.

Canada lags other markets when it comes to grocery e-commerce. According to market research firm Nielsen, online purchases make up just 3 per cent of the $109-billion in annual grocery sales in the country.

But the segment is growing fast. Nielsen estimates online sales will be 5 per cent of the market by the end of next year. In the first three months of 2020, as governments issued stay-at-home orders to combat COVID-19, online grocery shopping in Canada increased by 44 per cent compared with the same period last year, when the growth rate was 13 per cent, according to Nielsen.

“COVID-19 has forced people to try it out,” said Carman Allison, vice-president of consumer insights for Nielsen Canada. As of 2018, he said, 19 per cent of Canadians had purchased groceries online; by the end of March, that number jumped to 37 per cent.

“Before, consumers’ motivations for shopping online were all about convenience,” Mr. Allison said. “Convenience is still quite key but has a different meaning compared to pre-COVID; safety concerns are a big motivator now as well. And a lot of people are avoiding transit, which could also be a motivator.”

“The volume we have today is where we expected to be in a year or two years from now,” Metro chief financial officer François Thibault said at an online conference hosted by National Bank last week. “Demand has increased and we need to address that capacity.”

To compete with existing services, Empire is offering a slightly lower delivery fee than is typical in the industry, at $7.99. According to Ms. Joyce, other grocery e-commerce services mark up prices, but Voilà‘s will be in line with prices in Sobeys stores.

Empire does not expect to make money on the service in the first year, and has not said how long it will take to recoup its investment in building the distribution centres.

As Voilà expands, the automated facilities will eventually act as hubs, with smaller facilities for more efficient delivery within a city or for expansion to nearby cities. For example, a large tractor trailer could carry orders from the Montreal hub to a location in Quebec City, where vans could transport them to customers in that market; or from the Vaughan hub to locations across the GTA, where vans could then deliver local orders.

“One of the reasons [e-commerce] is so low in Canada is because customers haven’t been given that choice,” Mr. Medline said. “So of course it’s a small market, of course people put up with pickup at stores, or higher prices, or substitution or cancellation rates … there is not enough supply of great online grocery services.” 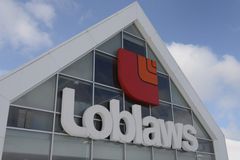 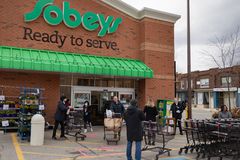