Growing fuel consumption, higher gas prices and the acquisition of the Longo’s grocery chain drove an increase in first-quarter revenue for Sobeys parent Empire Company Ltd., even as grocery sales are falling compared with the height of pandemic-related shopping last year.

The Stellarton, N.S.-based reported $7.6-billion in revenue for the 13 weeks ended July 31, an increase of 3.7 per cent compared with the same period last year. Empire is expecting same-store sales to continue to fall for the rest of this year, as some COVID-19 restrictions have been lifted and Canadians have begun dining out more often. Same-store sales – an important metric that tracks sales growth excluding the impact of new store openings or acquisitions – were roughly flat in the first quarter, but excluding fuel sales, that number fell by 2.2 per cent. Compared with two years ago, before the impact of pandemic-related shopping patterns, same-store sales rose by 8.1 per cent in the quarter.

Empire, which owns grocery chains including Sobeys, Safeway and FreshCo, reported that the industry is returning to some prepandemic patterns – such as competitors ramping up promotions after a pause last year, customers spending more at restaurants and slightly less on groceries, sales of higher-margin prepared foods and service-counter products increasing and more shopping at discount banners after customers flocked to full-service stores during the pandemic. But things have not returned entirely to normal.

“Compared to two years ago, this is a different industry,” chief executive officer Michael Medline said on a call with analysts to discuss the results on Thursday, adding that even in markets with fewer COVID cases, people are still spending more on groceries than they were before, even if not as much as in 2020.

Empire said on Thursday that it is gaining market share by 30 per cent in Ontario since 2017. Gains have been driven by the expansion of its Farm Boy chain, in-store improvements and renovations, growth in e-commerce and strong performance of its Foodland banner, Mr. Medline said. In March, the company further boosted its presence in Ontario by acquiring 51 per cent of the Longo’s store chain and its e-commerce service, Grocery Gateway, in a $357-million deal.

The company has also been expanding its FreshCo discount banner in Western Canada, opening new stores and converting some Safeway locations.

“Today I can say to you that we have fixed our western business, turned it around,” Mr. Medline said. “Operational performance, sales and profitability have significantly improved, and we have more upside to go.”

Empire is also in the process of expanding its e-commerce service, Voilà, which began doing home delivery from its distribution centre in the Greater Toronto Area last year, and is planning to open facilities in Montreal in early 2022, and Calgary in 2023, which will drive up costs. Voilà is also planning to add store pickup for online orders at 85 more stores this fiscal year. The company said that as results improve in Toronto and costs increase in Montreal and Calgary, Voilà will dilute its net earnings this year by roughly 25 to 30 cents per share, compared with 18 cents per share last year. While grocery e-commerce sales have continued to rise in Canada, growth has slowed compared with the surge in demand at the beginning of the pandemic, according to Empire.

Costs related to the pandemic have been decreasing for grocers. Empire reported that it spent roughly $18-million on safety and sanitization measures in the quarter, compared with $67-million in the same period last year.

The company reported that its net earnings fell to $188.5-million or 70 cents per share, compared with $191.9-million or 71 cents per share in the same period last year. Empire said that the prior year’s earnings benefited from a sale of real estate, and said that excluding the impact of that transaction, earnings per share rose by 4.5 per cent. 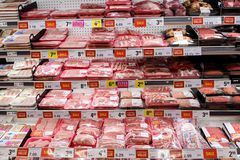 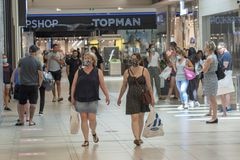