Spin Master Corp. recorded meteoric growth in its digital games business in the latest quarter as users of its Toca Life World app filmed themselves playing the game and shared the videos on social media, the company’s co-chief executive said Tuesday.

“There was a crazy amount of people that were actually filming themselves playing in the game and then uploading it to TikTok, and that exposure of the game really started to increase the amount of users,” Ronnen Harary told investors during a conference call.

“When you have that many people seeing the product, playing with the product and telling their friends, there’s a multiplier effect.”

The Canadian toy maker’s digital games revenue increased by more than 400 per cent to $31.8-million in its fourth quarter, driven by the Toca Life World platform.

The app, developed by Spin Master’s Swedish app studio Toca Boca, lets players imagine stories for characters in the virtual game, including kids, babies, elders and creatures, and drag the characters around the screen with their finger and make them do activities.

While it’s free to download the app, Spin Master makes money through the in-game purchases and upgrades.

The stronger digital games revenue, also driven in part by its Sago Mini kids app subscription user base, was revealed as the company said its revenue grew 3.6 per cent compared with a year ago for the three months ended Dec. 31.

The Toronto-based company said revenue for the quarter was US$490.6-million, up from US$473.5-million in the fourth quarter of 2019.

Yet its quarterly results also showed a decline in net sales to $434.3-million from $441.6-million a year earlier.

Mark Segal, Spin Master’s chief financial officer, explained that the sales slump was in part owing to retailers pulling promotions forward earlier in the fall, as well as the company’s decision to limit domestic inventory.

“This affected our ability to fulfill some late-season replenishment and e-commerce orders, especially on hot items,” he told analysts.

“While this meant we did not maximize our sales, the position we took allowed us to achieve our best sell-through and cleanest retail and Spin Master inventory levels in many years.”

Meanwhile, the company will be releasing its feature-length Paw Patrol movie in August, expanding the reach of the company’s popular kids entertainment franchise and opening up a new revenue stream.

“In terms of increasing our output, you will see more films coming from Spin Master in the future and I think that gives us a whole new way to actually entertain kids,” Mr. Harary told analysts.

“It’s really important for everybody to understand that we’re actually producing the film, we didn’t license the film out … and take a royalty on it,” he said. “Our team internally in Toronto produced the film, we hired the writers, we hired the directors, we did the whole casting with all that amazing voice talent.”

It’s unclear whether there will be a theatrical release for the movie or a combination of theatrical and video on demand, Mr. Harary said.

Meanwhile, although classic toys and game were a safe choice in 2020, he said consumers will “shift to newness” postpandemic, he said.

The company is preparing for this shift with a robust pipeline of new product development and the goal of green-lighting one to two new properties a year, Mr. Harary said.

Mr. Harary and Anton Rabie, co-founders of the children’s entertainment company, will step down from their co-chief executive roles next year.

Max Rangel was appointed global president in January and adds the chief executive role to his title in April. 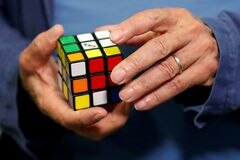 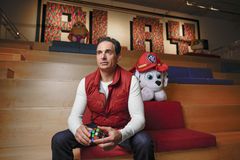