Sports viewers are helping the Canadian advertising market bounce back from the early, wrenching months of COVID-19, but the battered media industry will likely finish the year with ad revenue down more than $1-billion from 2019, according to figures provided exclusively to The Globe and Mail.

The rebound is being fuelled by unusually high spending on ads airing during a glut of sports programming after the major North American leagues returned to play during the summer.

The figures were provided by Standard Media Index (SMI), a New York-based company that compiles billings of major advertising agencies to boost ad market transparency. SMI, which opened a Canadian office this year, estimates it captures about $7.5-billion of the $12-billion spent on advertising in Canada in a normal year.

SMI’s numbers provide a stark depiction of the calamitous drop in advertising during the early months of the pandemic, when many marketers slammed the brakes on spending because of consumer uncertainty and the shutdown of bricks-and-mortar retailers.

Total ad spending in Canada, according to SMI, was off an estimated 37 per cent from March to July, compared with the same period in 2019. That represented about $975-million that disappeared: $347-million from spending on TV advertising, $361-million from digital and $267-million from a category that includes magazines, newspapers, radio and out-of-home advertising.

“Brands were very, very fearful of what was going to happen, and there was an immediate reaction to pull dollars very quickly out of the marketplace,” said James Fennessy, the chief executive officer of SMI. “So, yes, [TV] ratings were high, but it was difficult for people to go out and buy a car. So, [for example], automotive advertising was down 85 per cent over those COVID months.” Other categories where spending evaporated included travel and hospitality.

TV networks responded with bruising discounts in frantic hopes of selling air time that had suddenly become available. “Prices did come down significantly, across the board," Mr. Fennessey said. "[Advertisers] were just coming out of the market very, very quickly, so we generally saw prices dropping – depending on the program, depending on the network – there were pricing discounts of 30 to 60 per cent on programing through that period.”

The pullback in TV spending particularly punished Rogers Sports & Media, which has staked most of its fate on sports programming, including Major League Baseball games and a high-priced partnership with the National Hockey League. The NHL had been anticipating large TV audiences for its Stanley Cup playoffs, which usually run from April through June, but COVID-19 brought all pro-league action to a halt in the middle of March.

Rogers ad revenue was down 61 per cent from March through July, 2020, over the same period in 2019, according to SMI data. Ad revenue on stations owned by BCE Inc.’s Bell Media, which include CTV and TSN, was off 32 per cent, while ad revenue at Corus Entertainment Inc., which owns the Global Television Network and numerous cable channels, was down 31 per cent.

But when games returned in the summer – with the MLB regular season, as well as the National Basketball Association and the NHL playoffs – so did the money. In August and September, ad revenue on Rogers networks jumped 92 per cent over the same period in 2019.

That helped the company grab a 23-per-cent market share, up from its 13-per-cent share in August and September, 2019.

After having fallen 86 per cent in the period of March-July, ad revenue on Rogers’s Sportsnet network was up 379 per cent in August and September over the same period in 2019, powered by MLB, NHL and NBA games.

Rogers also benefited from a bounceback with Citytv, the only major Canadian broadcast network to show an increase over the past couple of months. SMI data indicate ad revenue on Citytv, which airs popular U.S. shows such as America’s Got Talent and Dancing With the Stars, was up 19 per cent in August and September of this year, over the same period in 2019.

“Everyone’s at their cabins normally in August,” Mr. Fennessy said, referring to Canadians' habitual desertion of TV in the summer. This year, however, Rogers “saw a massive turnaround," with Sportsnet crowing that 10.7 million viewers had tuned in at some point over the first weekend in August to watch the NHL and NBA return to play.

Still, Mr. Fennessy added, “obviously [Rogers] haven’t been able to make up the numbers they’d given up.”

“We have been thrilled with advertiser enthusiasm since the return of live sports,” Bell Media said in an e-mailed statement.

That jump echoed a bounceback across all media categories in Canada, with ad revenue in August, 2020, off only 4 per cent from a year earlier. And things improved the next month: Ad revenue in September was off only 0.3 per cent from September, 2019, according to SMI data.

Rogers did not respond to a request for comment.

The SMI figures echo previous public disclosures of Bell, Rogers, and Corus in their quarterly reports issued over the summer, in which all three companies indicated sharp declines in their media businesses because of COVID-19.

Rogers will report its third quarter results on Thursday, the same day Corus releases its fourth quarter and end-of-year results. 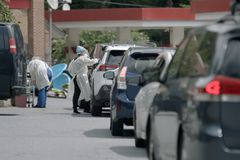 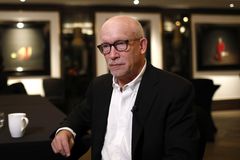 A year after leaving Sportsnet, Nick Kypreos is wondering who the Real Kyper is
October 12, 2020 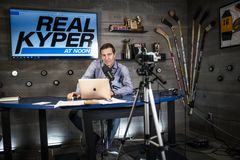