Sunwing Travel Group has received a takeover offer for its airline division from an unnamed suitor.

Stephen Hunter, chief executive of Sunwing, said a non-disclosure agreement with the would-be buyer prevents him from providing details. “We have been approached recently,” Mr. Hunter said in an interview.

Sunwing is a conglomerate: Along with Sunwing Airlines, it operates 45 resorts in Mexico and the Caribbean, tour providers, a luxury charter jet service, and other vacation and hotel brands. The group is 51-per-cent owned by the family of Mr. Hunter and employs about 3,000 people in Canada. Germany-based tourism and airline company TUI Group owns 49 per cent.

Mr. Hunter’s disclosure comes as the Canadian government and the European Commission weigh Air Canada’s takeover of Transat AT Inc . A decision on the union of Canada’s No. 1 and No. 4 airlines is expected any day now. The deal will fall apart on Feb. 15 if the two companies do not agree to extend the deadline.

Mr. Hunter said the integrated and interdependent nature of Sunwing’s divisions – the travel companies, resorts and airline – complicate the prospect of any sale.

“The airline is a vehicle in order to get our package customer from point A to point B. So our airline really is the cost department within our tour operator. And therefore, one really can’t go without the other,” he said. “And of course, Sunwing vacations provides about 30 per cent of the customers to our own hotels.”

Mr. Hunter said he also fielded a takeover offer “years ago” from a party he declined to name. WestJet Airlines Ltd. and Sunwing have held talks in the past, said an airline executive The Globe and Mail is not naming because they are not authorized to speak publicly. It is not clear whether the recent bid is from WestJet or another company.

The source said it is in Sunwing’s best interest to disclose its airline has a potential buyer, as this demonstrates the value of the whole company to lenders.

Bargain-hunting private equity funds are selectively investing in the airline industry during the pandemic, in expectation of a rebound once vaccination programs kick in and travel picks up.

In October, aircraft lessor and operator Chorus Aviation saw its share price jump 30 per cent after the Halifax-based company said it received a “preliminary, non-binding acquisition proposal from a third party.” Analysts said a private equity firm likely made the offer. Chorus has not made any further announcements on the proposal.

WestJet did not immediately respond to e-mailed questions.

The prospect of Sunwing bought by WestJet would pose a new challenge to the Canadian government as it mulls the Air Canada-Transat deal. Canada’s Competition Commissioner last year said the deal would limit competition and consumer choice and drive up airfares.

The European regulator, which is required to rule on the proposal owing to the large market share of Air Canada and Transat, suspended its investigation into the deal in late December as it awaits more information from the companies.

WestJet, in submissions to the Canadian government on the Air Canada-Transat deal, called for the takeover to be rejected or modified to reduce the combined companies’ market grip.

In contrast, Mr. Hunter of Sunwing recently told The Globe he supports the deal because a larger Air Canada will be better positioned to fend off foreign rivals.

Sunwing recently tapped federal financing worth as much as $375-million under the Large Employer Emergency Financing Facility program. It is the first Canadian carrier to tap the program, as other airlines have borrowed from banks and on credit markets.

Mr. Hunter said the new liquidity will help the company as it awaits a sector-specific bailout from Ottawa. Like Transat and Air Canada Rouge, Sunwing Airlines has suspended its normal operations until April 30 because of the pandemic.

Editor’s note: An earlier version of the story incorrectly said Stephen Hunter said more information on an offer for the airline should be available in the coming weeks. In fact, Mr. Hunter made no such statement in reference to the offer the airline has received. 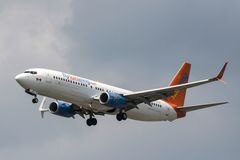