Professional investment to help finance commercial court cases is on the rise in Canada and a recent Supreme Court ruling paves the way for its use in insolvency matters, which are expected to balloon as a result of the COVID-19 pandemic.

Litigation financing by third parties involves an outside interest paying a plaintiff’s legal fees and other costs to bring a case to court in exchange for a portion of any monetary damages awarded if the lawsuit is successful. Common law historically forbade external funding or control of lawsuits, but rules against what was known as “champerty and maintenance” have been relaxed in many jurisdictions, including Canada.

Over the past two decades, litigation funding as an investment class took off in places such as Britain, Australia and the U.S. Now, international players who invest in litigation are taking an increasing interest in the Canadian market.

Meanwhile, the Supreme Court of Canada released written reasons earlier this month for a case it ruled on in January, and dealt specifically with the issue of litigation financing in the context of insolvency proceedings under the Companies’ Creditors Arrangement Act (CCAA).

The court did not go into detail on litigation funding in general, though it noted that Canadian jurisprudence has found it is not illegal. But it did support a lower-court judge’s approval of litigation funding as a financing option in the insolvency case at issue, ruling that the company’s creditors did not need to vote on it.

“The case is quite clear that litigation funding has a potential role in CCAA cases,” said Jeremy Opolsky, a partner at Torys LLP who works on insolvency cases.

He noted that it is likely to be particularly relevant in situations where a troubled company’s only major asset is a potential legal claim and it has no other way to fund the litigation. “This being the first time the Supreme Court has weighed in on litigation funding, I think this is the stamp of approval."

George Benchetrit, a restructuring partner at Chaitons LLP in Toronto, said in matters where an insolvent company could not otherwise pursue a potentially valid claim, litigation funding agreements are often seen as a means of providing access to justice. “I think it’s here to stay.”

The Supreme Court case involved the insolvency of Bluberi Gaming (and its sole shareholder), a Quebec business that made electronic gaming machines and software. It sought creditor protection under the CCAA in 2015, and in 2018, it asked for court approval of a litigation-financing agreement for a lawsuit against one of its main creditors, Callidus Capital Corp.

The Quebec Superior Court judge who was supervising the Bluberi CCAA proceeding approved that agreement but the province’s court of appeal later overturned the decision. (The complex case involved other issues in addition to the litigation funding.)

There have been other cases in which courts have approved of litigation financing in insolvency situations. But the Bluberi case is significant because it’s a ruling from Canada’s highest court and it also reversed the decision of the Quebec Court of Appeal.

In reversing the decision, the top court cleared up some uncertainty around litigation funding created by the Court of Appeal ruling. It also reinforced the principle that lower-court judges who deal with insolvency matters have significant discretion to make decisions in those cases.

Paul Rand, chief investment officer for Canada of Omni Bridgeway, the third-party funder involved in the Supreme Court case, calls the timing of the ruling “fortunate," noting that it comes amid great economic disruption caused by the pandemic.

“I think it’s widely expected that insolvency and restructuring will be a reality in the coming months. So for companies and debtors and creditors and their advisers to know that litigation funding is an option and there’s a source of capital is really important.”

Omni (which was formerly known as IMF Bentham) is an Australian publicly traded company with about $2-billion in capital to invest. It has operated in Canada for four years and has offices in Montreal and Toronto with nine employees, lawyers who formerly worked for prominent business law or litigation-focused firms.

Omni has made 14 investments in Canadian litigation to date, backing cases that include disputes over contracts, international arbitration, class-action proceedings and intellectual-property litigation.

It now faces competition in Canada from another major international backer of business-focused disputes, London, England-based Woodsford Litigation Funding Ltd. Woodsford CEO Steven Friel made a marketing and business trip to Canada in January and says the privately held company is now poised to close on three Canadian investments by the end of the month.

Like Omni, Woodsford conducts extensive due diligence before investing, evaluating the odds of success, a defendant’s ability to pay, the motivations of the plaintiff and the calibre of the lawyers involved in the case. Commitments are usually in the range of $3-million to $5-million, Mr. Friel said, adding, “So this is high-value, high-stakes litigation.”

The specific terms vary but Woodsford typically does not get paid unless the litigation is successful, in which case it takes either a multiple of the amount it invested or a percentage of the settlement or award.

Mr. Friel said many of the lawyers he met with in January were already familiar with Omni and noted that some “silent” competition also comes from wealthy individuals or distressed-asset investors who fund litigation on an ad hoc basis in Canada. He sees opportunities to invest in domestic litigation as well as international cases involving Canadian mining companies, for example.

“[Canada] is not the biggest market but I certainly think there’s room for a competitive litigation-funding environment."

Supreme Court of Canada to hold virtual hearings in June
May 7, 2020 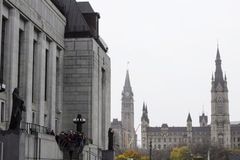 Supreme Court will not hear appeal challenging law on succession to the throne
Subscriber content
April 23, 2020