Canada’s top court is set to hear an appeal Tuesday in a class-action lawsuit by Mr. Sub franchisees seeking compensation from Maple Leaf Foods Inc. for loss of sales and reputational damage during the 2008 listeriosis crisis, a case lawyers say could significantly increase financial liability for manufacturers of almost any product.

The case before the Supreme Court of Canada raises a thorny issue in tort law, the body of law that deals with civil negligence. Most tort claims involve compensation for some sort of injury or damage to property, but the case against Maple Leaf asks the court to consider whether to impose responsibility purely for financial losses.

“The question that keeps popping up in case after case after case is, what if you’re negligent but you don’t cause physical harm to someone, you just cost them money?” said Andrew Bernstein, a litigation partner at Torys LLP, calling it an issue that “continues to bedevil the courts.”

The "broader implications of the case are very significant,” he said, noting that it raises the “spectre of indeterminate liability.”

“I think the concern you would have is that anybody who supplies anything that’s used in another business could face potential liability."

In 2008, an outbreak of listeria bacteria at a Maple Leaf processing plant led to the deaths of more than 20 people and serious illness among almost dozens more. The company issued a national recall of many of its ready-to-eat products, which include items such as smoked deli meats. Within months, Maple Leaf agreed to settle a series of proposed class-action lawsuits by victims of the outbreak and the company has received praise for quickly accepting responsibility for the crisis.

But the claims of a representative plaintiff and 424 Mr. Sub franchisees have remained unresolved. Maple Leaf had a partnership agreement with the chain owner, Mr. Submarine Ltd., but had no direct or contractual relationship with the franchisees themselves. The franchise owners were required to purchase and sell meats approved by Mr. Sub, which included two Maple Leaf products – roast beef and corned beef – that were affected by the recall.

Mr. Sub became publicly associated with Maple Leaf during the crisis when the Canadian Food Inspection Agency named the chain in a health warning and it was referenced in media reports. Consumers asked retailers if their meat products were affected and competitors posted signs proclaiming they did not serve Maple Leaf meats. Other restaurants, including McDonald’s, were also linked to Maple Leaf at the time.

The franchisees ultimately launched a class-action lawsuit, claiming the outbreak caused a “loss of customer confidence, loss of market share, and consequential economic losses in the form of lost profits and business interruption losses.”

On a motion regarding the issue of liability, a judge of the Ontario Superior Court of Justice found in favour of the franchisees in 2016. The Ontario Court of Appeal overturned that ruling in 2018, stating Maple Leaf did not owe the franchisees a duty of care for “economic losses arising from reputational harm.” The Supreme Court agreed to hear an appeal to the decision earlier this year. The case before the Supreme Court does not deal with costs to replace recalled meats or clean-up expenses.

In a written submission, Maple Leaf suggests a ruling in favour of the franchisees could pose a risk to public health or safety by imposing a disincentive on manufacturers to issue quick and broad recalls of dangerous products. The filing said manufacturers “should be encouraged to recall products which pose a risk of harm, without the threat that those very actions could expose them to liability for protecting against potential reputational harm and economic losses of those who distribute, supply, or sell the products.”

The franchisees counter in their own filing that there are regulatory requirements around when manufacturers must recall products and that “public policy favours imposing a duty to increase accountability and public safety.” They argue, “the franchisees were in a vulnerable position, with no ability to protect themselves contractually against Maple Leaf or Mr. Sub regarding Maple Leaf’s negligent supply of shoddy products. Tort law provides the only available remedy to the franchisees and the only means of holding Maple Leaf accountable for causing reasonably foreseeable economic losses.”

“The Supreme Court of Canada doesn’t wade into the commercial realm very often, so this is a sit-up-and-take-notice moment for companies that make consumer products, tort lawyers and businesses generally,” Ms. Dufort said.

“If the court opens things up and says from now on, there will be recovery in tort for economic loss, that will have huge repercussions, especially in consumer-oriented product liability class action cases,” she said, noting that it could extend liability beyond products that are actually dangerous to products that are simply “shoddy” or badly made.

Ms. Dufort said businesses need clarity and predictability on the legal risks they face. “The entire issue of what happens around the boundaries for economic loss will be very important for anyone who’s in the consumer product business.”

Lawyers for both Maple Leaf and the Mr. Sub franchisees declined to comment in the days ahead of the court hearing. The Supreme Court typically takes about six months after an appeal is heard to deliver a ruling. 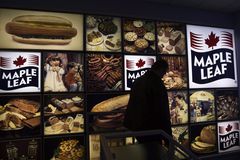