A shutdown at the Syncrude oil sands plant is reverberating through oil markets, sending North American crude prices higher early on Monday despite promises of greater production from Saudi Arabia and Russia.

Syncrude usually produces 350,000 barrels per day of upgraded, synthetic bitumen, but was shut down on Friday after a transformer blew, causing a power outage. The company’s initial estimate is that the plant would be down until the end of July.

The plant, north of Fort McMurray, Alta., was out of commission for nearly six months in 2015 after a major fire at its Mildred Lake facility, which had another fire last year.

Oil prices across the board fell later on Monday in a general market retreat.

The loss of Syncrude production will free up space for other producers on export pipelines that are operating at full capacity, and resulted on Monday in a firmer market for North American crude prices than was seen for international crudes.

“There really was some panicked buying in the front end of the futures curve” early on Monday due to the report of a six-week outage, said Phil Flynn of the Price Futures Group.

“Our refiners are refining a record amount of crude, and 350,000 barrels doesn’t sound like a lot. But when you are getting ready to ramp up for some record gasoline demand, it’s really creating some concerns in the market.”

Over all, however, North American energy producers continue to pump crude at a record pace. As a result, supply will be ample to make up for the Syncrude losses, said Hillary Stevenson, director for oil markets and business development at Genscape Inc.

“Everyone is aware that production in Canada has been outstripping pipeline capacity,” Ms. Stevenson said. “So from the end of June and through the beginning of July, there should be plenty of barrels to fill that space on the pipeline from those missing Syncrude barrels.”

Several oil sands producers also use the synthetic crude to dilute their bitumen to ship it in pipelines, so the Syncrude loss could affect companies such as Surmont, which is operated by ConocoPhillips Co.

In the United States, large inventories at the massive storage hub in Cushing, Okla., can be drawn down, Ms. Stevenson said.

Still, Goldman Sachs analysts sounded the alarm with an early morning report on the shutdown.

“With the global market pricing to pull crude out of the U.S., this loss of U.S. supplies will exacerbate the current global deficit, making the increase in OPEC production all the more required,” Goldman Sachs analysts wrote in the report. “And while Saudi is already ramping up exports, these will not be delivered until August with June stock draws already accelerating.”

North American crude prices initially rose on Monday after news of the Canadian outage, but later succumbed to the global nervousness that also drove down other commodities and share prices.

After being up sharply in morning trading, West Texas intermediate fell 50 cents from Friday’s closing price, ending the day at US$68.08 a barrel. The international benchmark Brent fell 82 cents to US$74.73. The strong production in North America had driven the spread between Brent and WTI to more than $12 two weeks ago, but that had shrunk to $6.65 at the close on Monday.

The Canadian news was overshadowed by concerns that Russia and Saudi Arabia plan to boost production by one million barrels per day and over U.S. President Donald Trump’s trade policy, said Phil Skolnick, analyst for Eight Capital in Toronto. 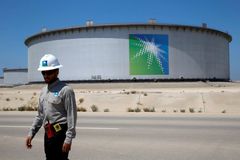