William Staber is getting hammered by Donald Trump’s trade war.

The price of the steel that his company, Staber Industries, uses to make washing machines has gone up 50 per cent over the past year and a half. The cost of aluminium has roughly doubled. At least some of that increase, he figures, is due to the President’s tariffs.

“I understand why he did what he did, but it probably could have been thought through a little more,” said Mr. Staber, a slim 60-year-old with wavy grey hair, as he sat in the boardroom of his factory, a white low-rise in an industrial park near Columbus, Ohio. “The consumer-grade aluminium I use isn’t even made in the U.S. – so what jobs is he protecting?”

But Mr. Staber supports Mr. Trump and plans to vote for his Republican Party in next week’s midterm congressional elections. For one, he agrees that the United States has to stand up to China, which he accuses of dumping subsidized products – including washing machines – on the U.S. market. For another, despite the tariffs, the economy is growing and his sales are up 50 per cent, for which he credits the Trump administration. Lastly, he likes Mr. Trump’s other policies, particularly cracking down on illegal immigration and his musings about ending birthright citizenship, which makes anyone born in the U.S. a citizen – even if their parents are unauthorized migrants.

“I grant you, he’s not the most tactful person around,” Mr. Staber said of the President. “But he can get some stuff done.”

Mr. Staber’s state is on the front line of Mr. Trump’s fight to remake international trade. One of the country’s top steel-producing states, it has many of the jobs the President’s tariffs are designed to protect. But its other manufacturers, from automakers to battery companies to Staber Industries, have been rammed by the higher prices of the metals they use. And a U.S. Chamber of Commerce analysis shows that US$5.7-billion worth of annual exports from the state are subject to retaliatory tariffs, including US$2.1-billion getting hit by Canadian levies – more than any other state.

Many of those feeling the pain, however, are willing to give Mr. Trump the benefit of the doubt for now. Even his political opponents here agree with the idea of erecting trade barriers in a bid to arrest the long-term decline of one of the state’s iconic industries.

But others fear the economic consequences if the war drags on and the President’s promises of an industrial renaissance in this perennial swing state fail to materialize.

Allen Armstrong, who grows corn and soybeans west of Columbus, took a bath this year on the latter crop after it was targeted by China in retaliation. He estimates his total revenue from soy has dropped 15 to 18 per cent, enough to make it unprofitable; his revenue from corn effectively had to subsidize his losses on soy.

But he agrees with Mr. Trump that China has to be held to account for its unfair trade practices and he’s willing to reserve judgment until it’s clear how the trade war will end.

“If this tactic works and China opens its market back up to us and we get a better deal out of it, then I’m okay with it – short-term pain for long-term gain,” he said. “My fear as this drags on is that it’s turning into long-term pain. It’s too soon to say.”

Mr. Armstrong, who identifies as a free-trade supporter, says he has voted for nominees of both parties and usually bases his decision on the individual candidate. Next week, he plans to vote for the district incumbent for the House of Representatives, Republican Warren Davidson, who has backed legislation that would limit the President’s ability to impose tariffs unilaterally .

With regards to the Senate race, however, Mr. Armstrong is undecided: He’s wary of incumbent Democrat Sherrod Brown’s protectionist views on trade but he feels Mr. Brown’s challenger, Representative Jim Renacci, hasn’t been clear enough on the issue.

In that contest, Mr. Brown is trying to thread the needle: He trumpets his support for tariffs – and blasts Mr. Renacci for supporting free-trade deals under previous presidents – but criticizes Mr. Trump’s handling of the trade war.

“You don’t play off steel workers against farmers, you don’t play off industry against agriculture, and he’s done that,” Mr. Brown said in an interview during a stop at a campaign office in a strip mall in Brunswick, Ohio, south of Cleveland. “You [should] align with our allies – Canada and Western Europe and Japan, maybe – to stop serial cheaters like China. But instead he attacked Chrystia Freeland for what she was doing and your Prime Minister.”

A lanky 65-year-old with a gruff mien and more than 40 years of political experience, Mr. Brown leads the RealClearPolitics average of polls by 7 per cent. He points to a possible path for the Democrats to win back Rust Belt blue-collar voters who abandoned the party for Mr. Trump.

“I don’t talk to voters as Trump voters or Clinton voters. I talk to them as workers,” he said.

Stacia Rohrer, a 41-year-old volunteer for Mr. Brown, cited Mr. Trump’s handling of tariffs as one of the reasons she decided to get involved with a political campaign for the first time. A mother of two who works for a cleaning company, Ms. Rohrer said she feared the unpredictable consequences of Mr. Trump’s trade policies and the retaliation could touch the company her husband works for, which manufactures chicken incubators.

“We’re going to be feeling it. Companies are struggling to stay open. It doesn’t make any sense,” she said. “It’s ultimately going to hurt the country.”


The state’s gains from the tariffs are somewhat less clear. Numbers from the Federal Reserve Bank of St. Louis show 7,700 steel jobs in the state in September, down slightly from February, before the tariffs were announced.

One company, Republic Steel, has announced plans to create more than a thousand jobs by restarting an idled mill in Lorain, west of Cleveland, and credits the tariffs for the decision. As of September, Republic, which declined to comment for this story, had hired 80 people for the mill.

Nucor, the largest producer of steel in the United States, has seen earnings shoot up 45 per cent in the first nine months of 2018 over the same period last year, spokeswoman Katherine Miller said. The company is creating 840 jobs to keep up with demand, including 15 at a plant in Marion, Ohio.

Ms. Miller said the tariffs, which have kept millions of tonnes of steel out of the United States, are one factor but not the primary reason for the growth; instead, she credited broader economic growth and the Trump administration’s corporate tax cuts and slashing of business regulations.

“We’ve seen the strong economy pushing steel demand higher since the middle of 2017, about a year before the tariffs were fully implemented,” she wrote in an e-mail.

Other major industry players, including ArcelorMittal and U.S. Steel, did not respond to requests for comment.

In Lorain, Mayor Chase Ritenauer used a stark example to illustrate the importance of steel: In 2016, when Republic and U.S. Steel retrenched, the hit to the town’s budget was so severe that Mr. Ritenauer’s administration had to briefly lay off firefighters until the federal government came through with a loan. So far, he said, he hasn’t noticed much benefit from the tariffs.

“This notion of thousands of steel mill jobs, that has not come to fruition, no,” he said. “I think the problem is that the President has changed his mind so much. There’s too much volatility for a lot of companies to make capital investments.”

Still, Mr. Ritenauer, a Democrat, acknowledges that Mr. Trump’s trade policies are popular in the area. It will be a boon to the Democrats that the President himself is not on the ballot for the midterms, he said.

At the Port of Cleveland, the effect of the tariffs is unmistakable. Steel imports and iron ore destined for the mills are the facility’s bread and butter. On a recent afternoon, cranes unloaded steel coils from one barge while a separate shipment of steel pipe lay further down the dock.

William Friedman, the port’s CEO, estimates steel traffic will be down roughly 100,000 tonnes for the year. That’s less work for the ship crews and stevedores who move the product through the port and the truckers who transport it to businesses around the state.

“The tariffs have not been good to us,” Mr. Friedman said in the port’s office, on the third floor of a repurposed red-brick warehouse overlooking Lake Erie. “It’s going to mean fewer jobs and less business revenue, there’s no question about that. There are hundreds if not thousands of jobs that could be impacted.” 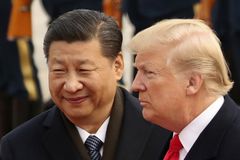 Opinion
Is Trump driving the U.S. toward the brink of fascism?
November 2, 2018 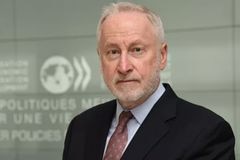 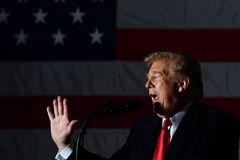