The Alberta government is providing TC Energy Corp. with a cash injection and loan guarantees that will allow it to start construction of the contentious Keystone XL oil pipeline to the United States in the midst of an economic crisis.

Calgary-based TC Energy said on Tuesday it plans to start work on the US$11.5-billion project more than a decade after it first applied to regulators in Canada and the United States to build it. Alberta agreed to contribute US$1.1-billion to gain an ownership stake that it plans to sell back to the company after commercial operations begin.

It will also guarantee US$4.2-billion of debt related to the 1,947-kilometre pipeline, which has gone through a dizzying array of applications, regulatory reviews, scientific studies, redesigns and legal cases since its initial application.

The company said it will cost US$8-billion to complete the pipeline on top of the US$3.5-billion already spent. Completion is scheduled for 2023, but complications could still upend the plans, such as legal challenges at the U.S. federal and state levels or political change in Washington.

TC Energy, formerly called TransCanada Corp., made the announcement as the energy industry suffers through a massive drop in oil demand due to the COVID-19 pandemic and a price war between Saudi Arabia and Russia. On Monday, the price of Western Canada Select heavy oil sank to less than US$4 a barrel for the first time, which would put virtually all producers in a losing position.

Alberta Premier Jason Kenney last week raised the idea of a Canada-U.S. energy response to deal with the price war. However, he said that talks with TC Energy about financial assistance from the province had gone on for six months.

“Now the chaos in global energy markets created by Saudi Arabia’s predatory dumping means that the market isn’t functioning properly and there are no prospective private-sector bidders [for] the Keystone XL project at this time,” Mr. Kenney told reporters on Tuesday.

“Without this investment by Alberta, I don’t believe the pipeline would be built, at least any time in the foreseeable future. We also believe that this is our last chance to get a major pipeline project done, and without it, the future of our largest industry will be compromised.”

Mr. Kenney estimated a net return to the provincial treasury of $30-billion through royalties and higher oil prices over two decades. The government will take on debt to fund its investment.

TC Energy first applied to build the massive project in 2009, as Canada’s oil industry sought new markets to boost prices for oil sands-derived crude. International environmental activists, landowners in Nebraska and various celebrities waged a lengthy campaign against it. They argued that it would go against global efforts to combat climate change and could contaminate a massive aquifer that is a water source for a large part of the United States.

Former U.S. president Barack Obama rejected Keystone XL twice, but President Donald Trump made approving it one of his first moves after his inauguration in early 2017. That approval was challenged, but later reissued.

The project is still embroiled in three federal cases. One is related to permits for water crossings that the U.S. Army Corps of Engineers granted without a separate environmental review. The others involve issues surrounding consultation and other requirements regarding Indigenous communities. TC Energy’s opponents are seeking preliminary injunctions to prevent construction from starting.

“The reality is that while Alberta is trying to move forward and resolve the financial hurdle that TC Energy is facing by providing these subsidies, none of them resolve the challenges that the project is facing – challenges which were making it difficult for TC Energy to get backing for the project without Alberta," said Anthony Swift, a lawyer with the Natural Resources Defense Council, which is among six U.S. environmental groups opposing the Army Corps.

Russ Girling, TC Energy’s chief executive officer, said he believes Keystone XL will survive the legal challenges and hiring can begin. “At the current time, we have all our permits to start construction. … That’s our intent to do here as soon as possible, in light of COVID. Obviously, we’ll be very, very careful about how we put people to work and ensure that all protocols are in place with our contractors,” he said.

The announcement prompted a 7-per-cent jump in TC Energy shares. The S&P/TSX Capped Energy Index surged 15 per cent after losing more than half its value this month.

Influential bond-rating agency Moody’s Investors Service cut TC Energy’s debt outlook to negative from stable, citing a “high level of execution risk” owing to legal challenges, as well as the prospect of demonstrations and civil unrest in opposition to Keystone XL. “Collectively, these actions may damage TC Energy’s reputation, increase its cost of capital, and potentially reduce its access to capital,” Moody’s said.

If construction starts as planned, Canada’s energy sector will have two new major export pipelines under construction after a lengthy period when all proposals were stalled in regulatory or legal processes. Work is under way on the Trans Mountain expansion – now owned by the Canadian government. 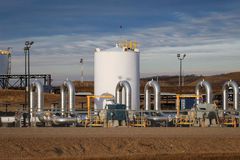