Do you ever watch poker tournaments on TV? Here’s what happens: The longer the game, the bigger the wagers get and the more likely players are to go bust when betting on a hand.

Toronto-Dominion Bank chief executive Bharat Masrani is one of those card sharks, caught in the late stages of a high-stakes game in the U.S. discount brokerage industry. By all accounts, Mr. Masrani is about to do the sensible and boring thing, and walk away. It’s in keeping with an approach that colleagues say drives all the TD boss’s strategic decisions: Don’t do anything that could blow up the bank.

TD owns 43 per cent of TD Ameritrade Holding Corp. and is expected to support a widely reported but unconfirmed sale of the Omaha-based brokerage to industry leader Charles Schwab Corp. for US$26-billion in stock. Analysts project TD Bank will emerge from the transaction with a 10-per-cent to 15-per-cent stake in a merged company that dominates the do-it-yourself financial-services space.

Cutting a deal with Schwab would be a dramatic exit. Until now, Mr. Masrani backed increasingly large bets by the U.S. investment dealer. TD Ameritrade grew by making a series of acquisitions, each larger than the last. The most recent takeover, in 2016, saw TD Bank put up US$1.3-billion and TD Ameritrade throw in an additional US$2.7-billion to acquire rival Scottrade.

Another round of consolidation became all but inevitable in October, when Schwab decided to exploit its scale with a brilliant marketing move: It offered to let customers trade stocks for free. (Prior to that, Schwab charged US$4.95 per trade.) Schwab has approximately 12 million customers and more than US$3-trillion of assets under management.

Smaller rivals, including TD Ameritrade with about 11 million clients and US$1-trillion in assets, had no choice but to follow suit. The fee cuts will trim future profits, and TD Ameritrade lost a quarter of its market capitalization on the day Schwab changed the rules.

TD Ameritrade was widely expected to stage yet another takeover to keep pace with Schwab. “TD cannot stand still. This is a business of scale and they either have to get bigger or get out,” said Doug Steiner, former CEO of E*Trade Canada, which Bank of Nova Scotia acquired from E*Trade’s U.S. parent back in 2008 for $444-million.

TD Ameritrade’s logical target was New York-based E*Trade Financial Corp. But the table stakes have more than doubled since the Scottrade takeover. Acquiring E*Trade would cost at least US$10-billion. After putting that massive stack of chips into the game, Mr. Masrani would still own a large stake in a volatile brokerage business that is chasing the industry leader, and is not linked to TD’s core retail banking franchise.

TD’s other options included dropping US$12-billion to acquire 100 per cent of TD Ameritrade. Analyst Darko Mihelic ran the numbers in early October and said while the deal made strategic sense, there was no indication an offer was in the works. But Mr. Mihelic said the market expected a resolution on TD’s plans and "since this would be a large transaction with significant stock issuance, we believe many potential TD investors may stay on the sidelines for the foreseeable future.”

TD’s stock significantly under-performed Canadian peers in recent months, owing to uncertainty over the future of TD Ameritrade, according to analysts.

A deal with Schwab, if it happens, would make it easier for TD to expand in the United States, where it already has 1,250 branches. “Assuming a smaller stake in a bigger player situation, TD could have a more liquid asset that it could potentially sell to finance a future U.S. regional bank acquisition,” said Gabriel Dechaine, an analyst at National Bank Financial. In a report on Thursday, he said: “This scenario would be positive for TD’s long-term U.S. strategy.”

Over a 32-year-career at TD, including a four-year stint as chief risk officer, Mr. Masrani has seen the damage that can be done to a bank’s balance sheet when loans go bad, or a division stumbles. Long before former U.S. president Barack Obama made the phrase popular, TD’s boss lived by the motto “Don’t do stupid stuff.” Doing a deal with Schwab, rather than doubling down again on U.S. discount brokerages, is a winning bet. 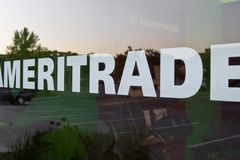