Two more major Canadian banks have reported quarterly profits declined by more than half as they stocked up reserves to absorb anticipated loan losses, capping three days of dismal forecasts from bankers about the extent of the economic damage the novel coronavirus could do.

The need to rapidly build bulwarks against future losses was the driving force behind the steep plunge in earnings across the sector in the fiscal second-quarter – profits declined 52 per cent at TD and 71 per cent at CIBC. But in the midst of a global pandemic that prompted a wide-ranging economic shutdown, all six of the country’s big banks remained profitable, with capital levels securely intact and their quarterly dividends unaltered.

“I think that’s one reason the banks’ [stocks] are rallying, even though the results themselves in absolute terms are not good," said Meny Grauman, an analyst at Cormark Securities Inc. “There’s a big relief that there was no bomb so far in the results."

The provisions that banks booked were largely based on complex forecasts of possible future losses, calculated using the best assumptions they can cobble together at this stage. They provide a yardstick by which to measure the potential scale of economic carnage from COVID-19, taking stock of debt held by consumers as well as businesses of all sizes in an array of industries. But the pace of recovery is uncertain, and senior bankers warned that a return to precrisis profitability won’t be quick.

“It may take to [2021], it may take to early [2022] before you see a robustness back in the banking sector again, assuming that the health care crisis is behind us,” Victor Dodig, CIBC’s chief executive officer, said on a conference call with analysts.

For the three months that ended April 30, TD reported profit of $1.52-billion, or 80 cents per share, compared with $3.17-billion, or $1.70, a year ago. Adjusted for certain items, TD said it earned 85 cents per share, on an adjusted basis, matching analysts’ consensus estimate, according to Refinitiv.

The resilience of banks’ capital levels was an important theme in the second quarter, and each large Canadian bank emerged with billions of dollars in excess capital over and above the minimum threshold set by regulators. Yet TD had a sharper decline than expected in its common equity Tier 1 (CET1) ratio – which measures a bank’s highest-quality capital relative to its assets, an important indication of a financial health – which fell to 11 per cent, from 11.7 per cent a year ago.

A range of factors contributed to the drop, including share buybacks before the crisis and changes in foreign exchange rates, but the bank also adjusted the levels of risk it assigns to various assets as customers drew heavily on credit lines when the shutdown began in mid-March. To be prudent, TD introduced a 2-per-cent discount on shares purchased through its dividend reinvestment plan (DRIP), which is a tool to raise capital, after BMO made the same move in April.

By contrast, the CET1 ratio at CIBC didn’t budge, remaining at 11.3 per cent, partly as result of a routine adjustment of the bank’s models. As some loans deteriorate because of economic losses owing to the economy shutting down, however, CIBC expects some pressure on the ratio is possible in the current quarter.

After two days of surging prices for bank stocks, shares in TD and CIBC both gave back some ground on Thursday, falling 3.8 per cent and 2 per cent, respectively, on the Toronto Stock Exchange.

Even as banks prepare for a surge in impaired loans, actual losses have been delayed in some cases by payment deferral programs the banks are offering and government relief measures. TD said it has deferred payments on $62-million in loans to consumers and businesses, a majority of which is made up of mortgages, while CIBC has granted payment deferrals on loans worth $51.6-billion to clients in Canada, the United States and the Caribbean.

As those programs expire, banks expect most customers to resume payments. “I view the deferral programs to be ultimately risk-reducing," said Ajai Bambawale, TD’s chief risk officer, because they give customers breathing room to bounce back from a temporary loss of income.

But TD has built reserves to cover some losses on deferred loans, “because in our view it is a matter of time before some become delinquent, others may become impaired as well," he said.

Driving up loan-loss provisions played a major part in sapping profits in the banks’ core retail divisions. Customers also spent less money on cards and used spare cash to pay down debt. And rapid cuts to interest rates by the Bank of Canada and the U.S. Federal Reserve squeezed profit margins on loans.

At TD, retail banking profit fell 37 per cent to $1.17-billion in Canada, and plunged by 90 per cent in its U.S. retail arm, to $102-million, excluding profit from the bank’s share of TD Ameritrade Holding Corp. And CIBC’s profit from Canadian personal and small business banking fell 64 per cent, to $203-million.

In banks’ capital markets divisions, robust levels of trading activity and record levels of debt underwriting were expected to help prop up banks’ profits. But in several cases, those benefits were eclipsed by rising provisions on corporate loans and losses on certain trading strategies in volatile equity markets. 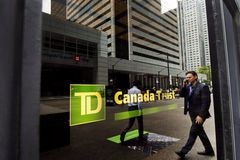 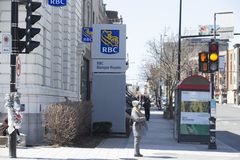 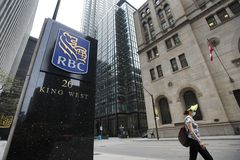