Ottawa is conducting a cybersecurity review of the use of the Chinese company’s gear for 5G networks. Three of Canada’s Five Eyes intelligence allies – the United States, New Zealand and Australia – have already announced restrictions on Huawei equipment for the build-out of next-generation cellular service. In Britain, the government is also reviewing its telecom-equipment supply chain and weighing whether to continue using Huawei gear.

For the past year, the United States has led a global campaign against the use of Huawei equipment, alleging serious security risks. The issue has become deeply entangled with diplomacy, politics and an American trade war with China.

Related: Huawei Canada says it would never spy for China

Vancouver-based Telus has worked with the vendor extensively over the past decade, and has the most at stake of any Canadian carrier. The Globe and Mail has reported that virtually 100 per cent of the company’s current 3G and 4G radio access network, which includes the antennas and radios on cell towers, relies on Huawei gear.

In an annual review of potential business risks and uncertainty, filed along with Telus’s fourth-quarter financial results Thursday, the company said it is working with the government on the cybersecurity review and has not yet selected a vendor for 5G. But it also publicly acknowledged the specific risk the company faces for the first time.

“A decision prohibiting the deployment of Huawei technology without compensation or other accommodations being made by the Government of Canada could have a material, non-recurring, incremental increase in the cost of Telus’ 5G network deployment and, potentially, the timing of such deployment,” Telus said.

Information is considered material under accounting rules if it could influence decisions that existing and potential investors or creditors make about a company.

A Huawei ban could also “permanently affect the cost structure of 5G equipment” for all Canadian network operators, the company said, by reducing the number of global suppliers from three to two.

Huawei’s primary rivals in the radio-access-equipment space are the more expensive European vendors Nokia and Ericsson.

Chief executive Darren Entwistle elaborated on the warnings during a conference call in which he lauded the company’s “partnership” with Huawei, saying it has contributed to fast network speeds, even as Telus has taken steps to “preclude Chinese equipment from these sensitive parts of our network.”

He was also careful to reassure investors that the company could handle any potential disruption, saying a Huawei ban could result in an “incremental,” one-time “cost that we will manage adeptly.” Mr. Entwistle added that while he would see it as a loss for Canada’s network speeds, “the Telus team has a long track record of successfully managing through various exogenous events … and we will continue to do so.”

He did not provide any numbers on the costs, and analysts have not made any specific estimates either. In notes to investors, some have offered thoughts similar to those shared by RBC’s Drew McReynolds last month, that the “cost inflation of a ban can be mitigated by each operator altering the pace of what will be a long, multiyear 5G deployment.”

On the call, Mr. Entwistle made a point of listing a number of countries that have not banned Huawei from 5G networks. “Whilst there has been significant coverage about 5G security and Huawei internationally, much has included speculation and misinformation about the types of measures being implemented,” he said, noting that Italy said it does not plan to ban Huawei and Germany has said any new security standards “would apply universally to all potential service providers.”

Mr. Entwistle met with Prime Minister Justin Trudeau on Monday, but Telus’s staff declined to say what they discussed. The CEO’s comments on Thursday are his first public remarks on the supplier issue after controversy has surrounded the Chinese vendor for months.

Telus has built a shared wireless network with BCE Inc., which The Globe has reported has used Huawei equipment for about 60 per cent to 70 per cent of its radio network.

Last week, BCE CEO George Cope also assured investors that any ban on Huawei equipment would be manageable, saying it “would be addressed within our traditional capital intensity envelope." Capital intensity is the ratio of capital investments compared with revenue, and cuts could be made elsewhere to smooth out costs so the figure does not spike.

Mr. Cope has also previously touted Huawei’s innovation and advanced products, but he did not devote as much time to the issue on BCE’s earnings call, nor did the company include it as a material risk in its own annual disclosures.

The government has said it “will not be rushed” into making a decision on the cybersecurity review. Dani Keenan, spokeswoman for Innovation Minister Navdeep Bains, did not answer directly when asked about whether the government would provide compensation to the telcos in the event of a ban, but said, “The minister has stated many times that our government never has, and never will, compromise on national security. We will follow the advice of our public-security officials and only work with partners that have their approval.”

Telus’s fourth-quarter results were largely in line with or better than analyst estimates.

The company added 112,000 new wireless contract subscribers in the period, ahead of average forecasts for about 105,000, but down slightly from the same time a year earlier when Canada’s national carriers engaged in a week-long promotional battle for subscribers in the holiday season.

On the residential side of its business, Telus added more subscribers than expected, with 24,000 new television customers and 28,000 new internet clients.

Profit at the company increased by 4 per cent to $368-million or 60 cents a share. On an adjusted basis, Telus earned 69 cents a share, just ahead of analyst estimates.

Revenue increased by 6.3 per cent to $3.76-billion as the company booked gains from data services on both wireless and home internet.

EBITDA grew at a slower pace, increasing by 1.1 per cent to $1.2-billion, which Telus said was owing to higher costs to support its new customers. It also reported increased spending on employee benefits after 2018 acquisitions that included IT consulting firm Xavient Information Systems, Medisys Health Group and AlarmForce operations in B.C., Alberta and Saskatchewan. (EBITDA represents earnings before interest, taxes, depreciation and amortization.)​ 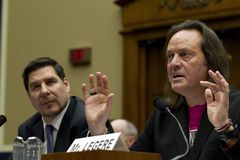 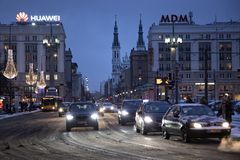