Ontario buyers of Tesla’s Model 3 sedan who are still waiting for their cars to be delivered have a difficult choice after the province’s new government cancelled a rebate program for buyers of electric vehicles – fork out $14,000 or give up on a car they have been waiting years to drive.

The new government of Doug Ford cancelled the electric- and hydrogen-vehicle incentive program – which provided $14,000 to buyers of Tesla Inc. cars – as part of its elimination of Ontario’s cap-and-trade emissions-reduction system. Revenue from cap and trade financed the electric-vehicle rebates.

The cancellation applies to all vehicles for which a rebate was offered, but vehicles on dealer lots or ordered from manufacturers by July 11 are still eligible for the refund if delivered, registered and given licence plates by Sept. 10.

But the rules are different for Tesla buyers. The catch is that Tesla does not have traditional dealerships with cars sitting on lots waiting to be picked up, but instead delivers directly to customers.

That means Tesla customers whose vehicles have been ordered but were not delivered by Wednesday will not receive the rebate. Ministry of Transportation spokesman Bob Nichols confirmed that the rebate will not apply, saying the two-month wind-down of the program was put in place to minimize impact to car dealerships.

“Given that Tesla do not operate on a dealership model, the wind-down approach to mitigate impacts to dealerships does not apply to them,” Mr. Nichols said.

Ross Kirkconnell, a health-care professional who lives in Guelph, Ont., was expecting delivery of his Tesla 3 on July 30. It would have been his first new car.

Mr. Kirkconnell put down a $1,000 deposit when he ordered the car 18 months ago and another $3,200 when he made his order final in May. He spent another $1,763 to buy a home charger and have it installed.

“I was really excited about leading-edge, clean technology,” he said in an e-mail on Friday. “So now I’m holding the bag. Do I continue driving my 2008 car that uses premium gas? I can’t justify the extra $14,000 and wouldn’t have even ordered if this wasn’t available.”

The Model 3 starts at $45,600 with an all-wheel-drive performance model offered for a manufacturer’s suggested retail price of $84,800.

Zenon Shevciw of Toronto is one of more than 20 Tesla buyers who contacted The Globe and Mail on Friday criticizing the government for excluding them from the two-month grace period that applies to purchasers of electric vehicles from other car companies who will take delivery before Sept. 10.

“I believe this was done specifically to target Tesla buyers as they buy directly from the manufacturer, especially as Premier Ford has referred to Tesla owners as ‘downtown liberals’ and ‘millionaires,’ ” Mr. Shevciw said in an e-mail. “This is simply not true … For most of us, the rebate is the difference between affordability and non-affordability. Many of us have ordered this car in good faith, placing a $4,200 non-refundable deposit.”

Tesla salespeople told buyers on Friday that the company will refund their $4,200 deposits.

He has a Tesla wall charger sitting in his house waiting to be installed.

“I will be putting the install on hold until I figure out what I am doing re: the car,” he said.

Several buyers e-mailed to The Globe Twitter exchanges they had with @fordnation, Mr. Ford’s Twitter account and the Twitter account of his campaign, in which they were told that if they ordered their cars before June 29, they would still receive the rebate. 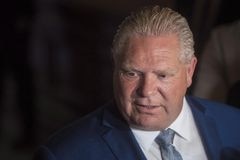 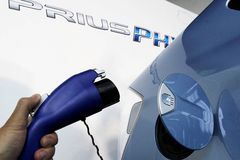