All crises end – the coronavirus crisis, too. But what if it doesn’t end soon, and what if the economy takes on a different shape when it does end?

A lot of investors and politicians are delivering predictably chipper messages, designed purely to boost public morale. The virus will be defeated quickly and everything will be back to normal soon, they assure us – the famous V-shaped recovery.

British Prime Minister Boris Johnson said “we can turn the tide [of this disease] within the next 12 weeks,” a statement with a high risk of not aging well. He doesn’t know – no one knows.

What we do know is that we are in uncharted waters, to use a normally tedious cliché. The economy is not coming first – saving lives is. That means the list of business losers will be long and varied, and any recovery may not apply to the former stock market stars. But there will be some winners, too.

Herein my list of who will be up and who will be down during and after the coronavirus catastrophe:

Down: Cruise companies, such as Carnival, Norwegian Cruise Line and Royal Caribbean. We all know that floating holidays are suddenly as popular as root canals – who wants to stuff themselves into floating petri dishes, especially after Carnival’s Diamond Princess disaster, where COVID-19 infected more than 700 passengers, eight of whom died? Will this industry ever fully recover? Maybe not. Don’t forget that one in seven passengers is older than 70, putting them in the high-risk group for outbreaks of flu viruses. And with investment portfolios taking a beating, luxury holidays like cruises may be the last item on anyone’s bucket list when the COVID-19 scare fades away. At minimum, the industry’s heady expansion days are over. Their deep-diving shares – down 80 per cent – say as much.

Up: Amazon, and just about any other reliable online service that gets stuff – toilet paper, groceries, books – to your door will do well in the postcoronavirus world. The millions of households that already use Amazon will use it more, and older people will get into the Amazon game, too – anything to avoid wandering around in supermarkets and malls packed with coughing shoppers. Amazon took a hit earlier this month, but the shares are bouncing back. It will soon be a US$1-trillion company again and keep rising.

Down: Airlines. All of them. They’re collapsing, and some will go bankrupt. A few, such as Alitalia, were effectively bankrupt before anyone had even heard of COVID-19, and the virus should put them out of their misery. Don’t feel sorry for them. The top U.S. airlines spent almost all of their free cash flow on share buybacks in the past decade, all the better to pump up executive pay packages. As a result, none of these airlines has a financial safety buffer, which is why they’re begging for bailouts. If they get bailouts, they should be highly conditional – such as no more buybacks ever again, executive pay cuts and the submission of new business plans that recognize they will be a lot smaller than they used to be as the public cuts back on flying. Airline tickets may become luxury purchases, as they once were.

Up: Any technology that makes it easier to work from home, among them Slack, Microsoft Teams and Zoom, the video-conferencing site that is suddenly very popular in countries under lockdown (in Europe, Zoom is being used by groups of friends for virtual morning coffees). Tablet computers, such as iPads, will also pick up sales, especially in the home-schooling market.

Down: Office development and leasing companies. Suddenly, hundreds of millions of people in Europe and North America are working from home. Many of them will find remote work lonely, technologically awkward or simply unsatisfying, since they will miss the banter and gossip that goes with workstation life. But many will love it, adapt to it quickly and realize their productivity has improved because they’re not being press-ganged into attending useless “strategy” meetings every two hours. A sudden or gradual shift to working from home could have devastating effects on office developers such as Canada’s Brookfield Property Partners. No wonder its shares are plummeting, down more than 50 per cent in the past 12 months. The downturn may accelerate if some of its tenants go bankrupt, with retail tenants being the most vulnerable. On the plus side, the construction of fewer hideous office towers in city centres would be welcome.

Up: Medical device makers. The world’s most sought after commodity is not gold or quarantine marijuana, it’s pulmonary ventilators. Demand for these life savers is outstripping supply by a factor of about 100, and any country that doesn’t make them is in trouble. Italy, for example, has banned the export of ventilators from the country’s lone factory. Canada makes none, if you can imagine that. Almost all are made in China, the United States and a few European countries. The outsourcing of vital equipment will have to end. Bring on domestic production.

Down: Fashion houses. Let’s assume that millions more people now under quarantine never go back into the office. If you’re sitting at home all day, you don’t need nice clothes. You many not even need semi-nice clothes. Jeans and a T-shirt might do the trick – even pyjamas. The clothing industry, from high-end Prada to British clothing retailer Next, are getting hammered as the quarantines set in. They will bounce back somewhat after the lockdowns end, but their return to glory seems unlikely. 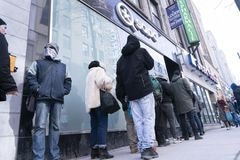 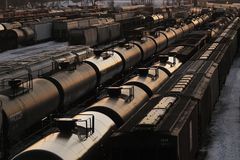