After months of focusing on how to grow marijuana, publicly-traded pot producers are facing a new problem: how to grow up.

One of the key next steps in the industry’s evolution from outlaw business to legal industry is to bolster corporate governance – the set of best practices in how a board manages a corporation, and the disclosures that let investors know it’s being done right.

It’s a step that the Canadian cannabis companies – and other young stars of the Toronto Stock Exchange that posted returns outpacing most of the S&P/TSX composite index in the past year – have yet to take, according to the Report on Business’s annual evaluation of Canada’s corporate boards.

Canopy Growth Corp., in its second year in the rankings, has finished second from the bottom once again. It’s trailed only by Aurora Cannabis Inc., coming in dead last in its first rating in Board Games. Aphria Inc. ranked 227th out of 237 companies.

Board Games: The comprehensive ranking of Canada’s boards

It is not just a matter particular to pot, however: Other young, high flying companies such as Canada Goose Inc. and Shopify Inc. dwell in the nether regions of the Board Games rankings. Canada Goose leads the index with a return of just less than 157 per cent through Friday, according to Standard & Poor’s Global Market Intelligence, with Canopy second at 134 per cent. Aurora, Aphria and Shopify all rank in the top 25.

“You might be able to get away with less than tier-one corporate governance for a while, but it would be unwise to wait for your stock price to drop and the market tell you your corporate governance practices aren’t up to snuff, because now you’re dealing with it in the vacuum of a crisis,” says Rahul Bhardwaj, chief executive of the Institute of Corporate Directors. “That would not be wise.”

Jennifer Longhurst of Davies Ward Phillips Vineberg LLP said many young companies need a greater awareness of what they should be doing. “Startups need to understand governance best practices and monitor the evolution in those practices,” said the author of the law firm’s annual Governance Insights survey of Canadian trends. “Like it or not, a junior company will be judged comparatively by those standards and in times of volatility, or declining performance, those are oftentimes the first areas of attack.”

For an example of a company that faced a governance-based attack when its share price was low, look to Crescent Point Energy Corp., which dropped nearly 50 spots in this year’s rankings, losing more points than any other company, as it battled an activist investor. Cation Capital Inc. picked away at Crescent Point’s compensation practices, pointing out a disconnect between its hefty executive-pay totals and its woeful stock return. (Board Games measures elements of pay disclosure and governance – for example, giving Crescent Point marks for holding a say-on-pay vote – but makes no judgment on whether shareholders are getting a good bang for their bucks. They felt they were not, as Crescent Point lost say-on-pay votes in 2016 and 2018.)

Or, for an example of how even long-term share outperformance can offer no blank check on governance matters, look to Alimentation Couche-Tard. The convenience-store chain could point to a stock price that had multiplied 650 times in its 30-year history when it asked shareholders in 2015 to extend the super-voting powers of its four founders, even as they gradually began to retire from the company. Facing shareholder pushback, it pulled the proposal.

Governance specialists say investors may be more tolerant of less-developed structures in young companies because management is focused on other matters. “Young company startups – the cannabis industry is an example of that – are grappling with a lot of challenges [compared with] companies that have evolved or matured,” Ms. Longhurst said.

Most young companies are not as cash-rich – good governance comes at a cost – and companies in the cannabis industry in particular had to worry about complying with a host of federal and provincial regulations on marketing, selling and packaging. “Investors of those young companies may not want management to be devoting both people time and money toward some of those processes given some of those other challenges they’re focused on,” Ms. Longhurst said.

Sleep Country Canada Holdings Inc. is an example of a young company that was preoccupied with those challenges after its 2015 initial public offering. But it also saw its 2017 Board Games ranking – 234th out of 242 – and felt it had to do better. It added 26 points in 2018 and moved firmly into the middle of the pack.

“When we first went public, we were very focused on growth,” chief financial officer Robert Masson said in an interview. “Going public and all the regulatory affairs that go with that is a big extra burden, and we run a pretty lean ship here. We don’t even have internal [legal] counsel. So these are all things that add to the workload.”

“But our board does care about corporate governance, and that’s why we focused our attention on this,” Mr. Masson said. “And now that we have a foundation in place, it becomes less of a burden every year, and it’s more just getting it done in the normal course of business.”

One example of the changes Sleep Country made: CEO David Friesema owns stock in the company worth more than three times his base salary – but the company didn’t have a formal policy requiring it, and Sleep Country didn’t do a good job of explicitly disclosing his holdings. “If we’d asked the board prior to this, ‘Do you think it’s a good idea the CEO holds stock?’ they would have absolutely agreed with that,” Mr. Masson said. “It was just a matter of writing it down.”

Shengjun (Victor) Li, an executive vice-president at Kingsdale Advisors who specializes in governance issues, says as companies mature, they often attract more institutional investors, who are more attuned to, and more vocal about, governance, compared with retail investors. “When their shareholder base changes, they have to listen … eventually, they face the pressure of shareholders.”

Still, it remains to be seen when and whether some of the other young companies that currently lag will become more proactive on governance matters.

A spokeswoman for Shopify Inc., the tech company that provides e-commerce services for small business, declined to comment for this story, while Aphria, Aurora Cannabis and Canada Goose failed to respond.

The cannabis companies have a number of governance weaknesses that can be corrected easily, by creating and disclosing processes for the board stock ownership and self-evaluation, for example. Or they can evolve in time, such as shifting the board mix away from early investors and founders to more independent directors. Aphria, for example, added four new independent directors at its annual meeting earlier this month.

Other governance issues are intentional, fundamental, and long-term. Shopify and Canada Goose have dual-class share structures in which company insiders or private investors have multiple votes for each share they own, versus single votes for investors who buy common shares on the TSX. These structures de-couple economic ownership and voting rights, giving the holders of the supervoting shares more influence than their investment might otherwise warrant.

Dual-share structures have long been a feature in corporate Canada, given the number of family-controlled companies such as the Desmarais’ Power Corp., or Bombardier. The newest Canadian dual-class companies, however, may be taking their cue from U.S. tech giants Google parent Alphabet Inc. and Facebook Inc., whose structures are more about founder control than family control.

Canada’s institutional investors have largely expressed misgivings about dual-class structures, but have needed to tolerate them in order to invest in as wide a range of domestic stocks as possible. The Canadian Coalition for Good Governance, in a 2013 policy statement on the issue, noted “there is not unanimity among CCGG members as to the governance principles which should apply to [dual-class share] companies in Canada” – something still true, says the group’s executive director, Catherine McCall. “Institutional shareholders continue to buy them, in spite of some of them having objections in principle. There’s not just one view on it.”

That may give Shopify and Canada Goose some cover, and the cannabis companies more time to change their practices. There will always be, however, institutional shareholders such as the Canada Pension Plan Investment Board, who treat good governance as a requirement for investment. If you don’t adopt those principles, CEO Mark Machin said, “the chances are you’re going to underperform financially and economically. It’s not a trade-off.”​ 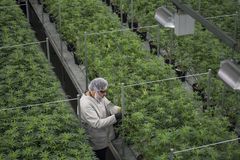