Complicated as it may be for Prince Harry and Meghan, Duchess of Sussex, to disentangle themselves from their day-to-day royal duties, the Sussexes will face a truly Byzantine question once they set up house in Canada – figuring out which country should get their tax dollars.

But each half of the Sussexes faces a very different situation, once they make good their plan to split their time between Canada and Britain. Prince Harry, currently a British resident, would be subject to the tax treaty between the two countries. But Meghan is a citizen of the United States, one of only two countries in the world that demands tax payments regardless of residency.

The intersection of tax claims from three countries, not to mention Harry’s unique background, adds to the complexity of determining the couple’s residency for tax purposes (something distinct from their immigration status). But according to tax experts, the main underlying question remains the same: What locale is the centre of their family and economic life?

“It really does come down to where you’re most connected to,” says Andre Rachert, tax partner at Cook Roberts LLP in Victoria.

For Harry, those questions would be resolved through the Britain-Canada tax treaty, which supersedes the provisions of domestic tax law that would otherwise apply, Mr. Rachert says. The first test will be whether the couple has a permanent home in Canada or Britain. Harry and Meghan have said they intend to live part of the year in Canada, implying that they will obtain a permanent residence in this country. However, the couple will also have an official residence in Britain, Frogmore Cottage, meaning that the first residency test would not resolve their status.

That may mean that tax authorities would then use the “centre of vital interests” test that looks at the balance of personal and business interests between two possible taxing jurisdictions. The Prince and Duchess have said they want to become financially independent, but for the moment almost all of their income is derived from payments from Prince Charles, through the Duchy of Cornwall. A much smaller amount, about 5 per cent, comes from the public through the Sovereign Grant. (The couple has said they want to eventually eliminate that payment.)

But Harry and Meghan have also trademarked the term “Sussex Royal,” an indication that they could begin operating their own business. Such a move would open up fresh considerations on corporate taxation, but it would also shift the centre of the couple’s life, for tax purposes at least, toward Canada.

If that second test is inconclusive, then tax authorities will move on to considering where the couple makes their habitual abode – their home. Where do they spend most of their time? Where does Archie, their son, go to school? The answers to those questions could decide whether Harry becomes a resident of Canada, for tax purposes.

Canadian tax authorities would also need to decide on the tax-residency status of the Duchess of Sussex. But there is the added complexity of her U.S. citizenship, meaning she would need to file a U.S. tax return, and pay taxes.

However, under the treaty between Canada and the United States, taxes paid to Ottawa by Americans are credited against their U.S. levies, meaning the Duchess would not have to send any cash south.

Harry has also inherited millions through trust funds, and will add to that as he grows older. Given that those arrangements predate the move to Canada, the Prince would most likely avoid having to write a cheque to the Canada Revenue Agency.

Then there is the matter of what would be considered income, said Wendi Crowe, partner at Miller Thomson LLP in Edmonton, who works with high net-worth individuals. Much of the Sussexes’ income comes from the estate of the Prince of Wales. Would the CRA deem that to be taxable income – or simply a gift from Dad? “In this case, that would be one of the more interesting issues,” says Ms. Crowe.

And if the Sussexes remain in Canada for the long term, they will need to start thinking about estate planning. Canada has lower rates of taxation on inherited assets, but there is no exemption. By contrast, the United States has higher rates, but only on inheritances over US$11-million, Mr. Rachert says that would mean Meghan would be better off as a resident of the United States for tax purposes.

One thing is for certain: The Queen should avoid bequeathing Prince Harry any prime real estate in Britain. Upon his death, his estate would need to pay capital gains on any assets, wherever they were. “I don’t think they want to give him any castles," says Mr. Rachert.

Opinion
Harry and Meghan have no idea: Immigrating to Canada is hard
January 20, 2020 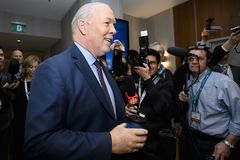