British Prime Minister Theresa May tried to face down and win over Conservative Party critics of her handling of Brexit as warnings mounted Wednesday about the disruption that could be unleashed if Britain leaves the European Union without a divorce deal.

May was addressing a meeting of her party’s “1922 Committee” of backbench lawmakers. Many of them oppose her attempts to strike an agreement with the EU, and some the Conservatives have called for the prime minister’s replacement.

The meeting came as Britain’s spending watchdog, the National Audit Office, said smugglers and other organized criminals were likely to exploit gaps in border enforcement in the event of a “no-deal” Brexit. The International Air Transport Association also said Wednesday there could be “chaos for travellers” if backup plans weren’t put in place quickly.

Britain is due to leave the EU on March 29, but London and Brussels have not reached an agreement on divorce terms and a smooth transition to a new relationship. The stalemate has heightened fears that the U.K. might leave without a deal in place, leading to chaos at ports and economic turmoil.

The National Audit Office said in a report that political uncertainty and delays in negotiations with the EU have hampered preparations for new border arrangements, and the government is now racing to bolster computer systems, increase staffing and build new infrastructure to track goods.

The office said 11 of 12 major projects may not be delivered on time or at “acceptable quality.”

“Organized criminals and others are likely to be quick to exploit any perceived weaknesses or gaps in the enforcement regime,” it added.

IATA, the international airline trade body, called for urgent planning by Britain and the EU to ensure “the uninterrupted continuation of air connectivity” – in other words, to keep planes flying – and to maintain safety and manage border controls.

De Juniac said that “with less than six months to go, we have little more certainty than we did in June 2016,” when Britain voted to leave the EU.

“A backstop contingency plan to keep planes flying after March must be published, and quickly,” he said.

Meanwhile, the Financial Times reported that British Transport Secretary Chris Grayling raised at a Cabinet meeting on Tuesday the idea of chartering ships to bring in food and medicines through alternative ports if new customs checks led to gridlock on the main shipping route between Dover in England and Calais in France.

“We remain confident of reaching an agreement with the EU, but it is only sensible for government and industry to prepare for a range of scenarios,” the Department for Transport said in a statement.

Scottish First Minister Nicola Sturgeon, a Brexit opponent, said the government’s “staggering incompetence” made Britain leaving the EU without a deal in place “the most likely outcome.”

“I think Brexit is frankly shaping up to be the biggest failure of government policy and handling of a situation that any of us have ever seen, perhaps in our entire lifetimes,” Sturgeon said.

May said this week that a divorce deal was “95 per cent” done, but the two sides still have a “considerable” gap over the issue of the border between the U.K.’s Northern Ireland and EU member Ireland.

Britain and the EU agree there must be no barriers that could disrupt businesses and residents on both sides of the border and undermine Northern Ireland’s hard-won peace process. But so far, each side has rejected the other’s solution.

May has attempted to break the impasse by suggesting that a post-Brexit transition period, currently due to end in December 2020, could be extended to give more time for new trade and customs arrangements to be put in place that would eliminate the need for border checks.

The EU has said it is open to the proposal, but the idea has infuriated May’s political opponents on both sides of Britain’s Brexit divide.

May was seeking to stem the growing revolt with a rallying speech to the 1922 Committee, the backbench committee with a key role in deciding who leads Conservatives.

Under Conservative rules, a vote of no-confidence in the leader is triggered if 15 per cent of party lawmakers write to the 1922 Committee requesting one. The required number currently stands at 48; only committee chief Graham Brady knows how many have been submitted.

David Rising in Berlin contributed to this story. 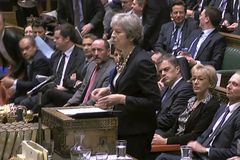