Thomson Reuters Corp. posted stronger-than-expected fourth-quarter revenue Tuesday and announced a two-year plan to transition into a tech-focused content provider, investing as much as US$600-million to hire new talent and boost its artificial intelligence and machine-learning technology.

The “Change Program,” as the plan is known, is banking on the corporate world’s continued reliance on technology in a postpandemic environment, the company said.

“Our transition to a content-driven tech company has definitely been accelerated by COVID-19,” chief executive Steve Hasker said in an interview with The Globe and Mail. “We are going to add more machine-learning capabilities, more SaaS [software-as-a-service] capabilities.”

Mr. Hasker added that demand for the company’s software has increased sharply over the past year as its professional clients – law firms, banks, accounting firms – increased spending on technology.

The news and information provider’s revenue rose 2 per cent for the quarter ending Dec. 31, 2020, to US$1.61-billion, driven primarily by the performance of its main business lines, which provide legal, corporate, accounting and tax software and information. The pandemic boosted renewal rates for these services, even as overall earnings were offset by a decline in news revenue.

Thomson Reuters also raised its quarterly dividend to 40 US cents from 38 US cents.

Approximately 80 per cent of the company’s revenue comes from software and information subscription services. Revenue for the legal arm grew 5 per cent, to US$653-million, while its corporate division saw a 4-per-cent rise to US$338-million.

By contrast, revenue from Reuters News fell 1 per cent, to US$164-million, and global print revenue plunged 10 per cent, to US$177-million. Reuters Events, a wing of the business launched in 2019 to focus on conferences and gatherings, took a particularly hard hit in 2020 because of the pandemic and is assessing whether in-person conferences may resume in 2021.

Operating profit for the quarter grew 343 per cent, to US$956-million, owing to the sale of an investment, an amendment to the company’s pension plan and markedly lower costs after the sale of its financial-services-data business Refinitiv to the London Stock Exchange Group (LSEG).

Indeed, Mr. Hasker, who has been in the job less than a year, spent much of 2020 embarking on a major cost-cutting plan centred on the Refinitiv sale. The all-share deal, which closed at the end of January, sees Thomson Reuters still indirectly owning 82.5 million LSEG shares with a market value of about US$10-billion.

The sale has given the company a substantial sum of cash with which to hunt for deals. “We are going to increase our acquisitions going forward, but they will very much be acquisitions in and around our core three lines of business, complementary to the transition program,” Mr. Hasker said, adding that he would not buy anything that would “slow down” the company’s pivot to a greater tech focus.

For the year, Thomson Reuters revenue increased 1 per cent, to US$5.98-billion. Diluted earnings per share fell 28 per cent for 2020, to US$2.25, because of a non-cash deferred tax benefit associated with the restructuring of the company’s foreign operations.

The company also provided a three-year outlook that forecasts total revenue growth of 3 per cent to 4 per cent in 2021 but 6 per cent by 2023. Prior to the Refinitiv sale, revenue had been growing at an average of 1 per cent a year. 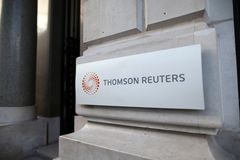 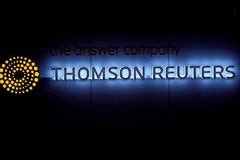