Thousands of Google employees across the world staged a walkout on Thursday to protest against the company’s handling of sexual-harassment complaints, a move being hailed as a wake-up call for an industry that has long struggled to fix its workplace culture.

The walkout was a “huge moment,” for Silicon Valley, said Anne Shaver, a San Francisco employment lawyer who represented women in class-action lawsuits involving gender discrimination, including a suit against Microsoft Corp.

Google employees erupted in anger after The New York Times reported that Google had quietly paid large sums as part of exit packages to male executives accused of sexual harassment at the company, a subsidiary of Alphabet Inc., but stayed silent about why the men left.

The Times said the payments also included US$90-million to Android creator Andy Rubin after a company investigation substantiated sexual-harassment claims against him, although Mr. Rubin has denied the allegations.

“I think this was the $90-million straw that broke the camel’s back,” said Celie O’Neil-Hart, a Google employee and one of the organizers of the walkout.

This week, Richard DeVaul resigned as director of the research division Google X after a woman alleged he asked her to remove her shirt so he could massage her during a job interview.

Employees at more than half of Google’s worldwide offices walked off the job at 11:10 a.m. local time. Organizers said they expected about 1,500 employees to participate, but the protests appeared to be much larger. Alphabet had 94,372 employees as of Sept. 30, 2018.

Hundreds of employees crammed into a courtyard at Google’s headquarters in Mountain View, Calif., for a 40-minute protest carrying signs that read: “Time’s Up,” and “Don’t be evil” and “Equal rights.” Google employees staged walkouts at several of the company’s offices around the San Francisco Bay Area.

Female employees spoke about their experiences with harassment, and organizers read out stories from women who had shared them privately on an internal Google website. Many of the protesters wore blue ribbons pinned to their shirts to honour sexual-harassment survivors.

“I have friends, I have family, who have been sexually harassed time and time again,” said JJ Wanda, a software engineer who protested at Google’s headquarters. “I have seen friends get hurt, and have their careers destroyed by this.”

In Canada, where Google employs more than 1,100 people, workers organized walkouts at offices in Kitchener, Ont., Toronto and Montreal.

More than 100 left Google’s Toronto office on Thursday morning, trudging through light rain to the lawn of the historic Osgoode Hall building a block away. There, a staff member who refused to provide her name read a prepared statement about problems within the company.

“Time’s up on sexual harassment, time’s up on abuse of power and time’s up on systemic racism,” she said. “We’re here to say enough is enough. We are demanding structural changes with explicit goals of transparency, accountability and equity.”

About two dozen workers, some wearing company T-shirts under their jackets, walked out of the tech giant’s Montreal office. And in Kitchener, nearly 100 people staged a “walk-in” at the company’s community space, which media were prevented from entering.

In a statement, Google chief executive Sundar Pichai said the company is reviewing all the “constructive ideas” from employees to improve policies and practices.

The company has said it fired nearly 50 people over a two-year period because of sexual harassment. In an internal memo that was leaked to the media before the walkout, Mr. Pichai told employees management was aware of the walkout and that the company would make sure they “have the support that you need.”

Ms. Shaver, the employment lawyer, said it is common for male executives accused of sexual harassment to walk away quietly with generous payouts. But the sheer size of Google’s severance packages and the fact that they were made public and sparked outrage throughout the company is rare.

“I'm personally not aware of another instance in which that type of severance package has been made public and employees have responded to it with a walkout,” she said. “I think it's extremely powerful.”

Security expert Leigh Honeywell knew the revelations were coming weeks ago, when one of the Google employees featured in the Times story came to her office for a consultation. Even so, Ms. Honeywell, a Canadian who runs a San Francisco consulting firm helping employees and companies protect themselves from harassment online, was still shocked by the allegations and heartened by the massive response from Google employees.

She sees the walkout as part of a broader movement of employee activism in the industry, pointing to Google employees who have protested against the tech giant’s contract with the Pentagon, and the thousands of workers who signed Ms. Honeywell’s Never Again pledge, which she created shortly after the 2016 U.S. presidential election, asking technologists to commit not to work on unethical projects.

“This is the collision between that increased advocacy and the #metoo movement,” she said of the walkouts. “There’s a recognition that this is a deep systemic problem enabled by structures of power.”

Yet, sexual harassment remains a problem in the tech industry.

A survey of women in Silicon Valley this year found 59 per cent had been subject to unwanted sexual advances, about the same number who experienced that behaviour in 2015.

At the same time, 56 per cent of women said the focus on gender bias has been good for the tech industry, compared with just 8 per cent who said it had been bad, said Michele Madansky, the report’s co-author and a former Yahoo executive who now runs a consulting firm.

“The more of these women who get up there and take a stand and tell their stories, the more empowering it is to other women who are being marginalized,” she said.

With reports from Beth Bowles in Kitchener, Ont., and The Canadian Press 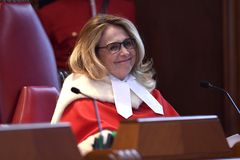 Experts say parents are the first line of defence in preventing sexual abuse in sports
October 26, 2018 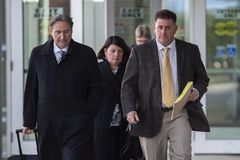 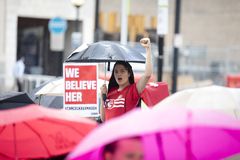