Mr. Macklem is 58 but will turn 59 the day after he takes over as governor in June.

There is a recent tradition of recruiting from outside Canada’s central bank for a new governor – David Dodge, Mark Carney, Stephen Poloz – and while this continues with Mr. Macklem, he’s hardly an outsider from the institution.

Much of his career, aside from much-applauded stints at the federal Department of Finance and helming the University of Toronto’s Rotman School of Management, has been at the bank: about 25 years.

Who is Tiff Macklem, the new Bank of Canada governor?

In 2013, Mr. Macklem was the second-in-command at the central bank as senior deputy governor under Mr. Carney. He was widely expected to be picked as Mr. Carney’s replacement, but lost out to Mr. Poloz.

Don Drummond, a former federal Department of Finance official and later a bank economist, said Mr. Macklem’s new appointment “rights an injustice that was done seven years ago.” He said in his opinion, friction between Mr. Carney and the Conservative government, and in particular former finance minister Jim Flaherty, unfairly cost Mr. Macklem the central banking job back in 2013.

Mr. Macklem left the bank shortly after for Rotman.

He said Mr. Macklem is “one of the very rare people” who can grasp both the technical models at the heart of monetary policy, determine the implications of this modelling for public policy and then communicate it to the public and Parliamentarians.

A Canadian who works as a U.S. central banker cited the same intellectual skills when asked for comment on Mr. Macklem.

David Andolfatto, a senior vice-president at the Federal Reserve Bank of St. Louis, recalled that when they were both students in the 1980s at the University of Western Ontario in London, Ont., Mr. Macklem selflessly offered him help grasping some difficult macroeconomic concepts.

“He pulls out his pen and then asks me to think about the problem using a diagram, which he wrote out on a napkin. I remember feeling a light bulb turning on over my head, and marvelling at how it was that a student could explain something so much more clearly and intuitively than a professor,” Mr. Andolfatto said in an e-mail. “I wish I had kept that napkin. I use that episode as a model for how to teach people difficult concepts.”

Navigating through uncertain times will be Job No. 1 for Mr. Macklem. It’s not unfamiliar territory for him.

It’s Mr. Macklem’s work during the 2007-09 global financial crisis that may have factored strongly in his selection. During this period he played a key role in Canada’s response as a senior bureaucrat at the Department of Finance and as the Group of Seven deputy who worked with major allies and the International Monetary Fund.

“It was really the fog of war,” Paul Boothe, who was a senior official at the federal Department of Industry during the financial crisis, said of the onset of that period. “We weren’t really sure what was going on. All of the sudden these U.S investment banks started to seize up. It took a pretty steady hand to work through that. Tiff wasn’t the only one, but he was certainly part of the team.”

Tiff is actually a contraction of Mr. Macklem’s middle name Tiffany – the name of a family doctor who delivered generations of Macklem babies. His first name is Richard.

Mr. Macklem was born in Montreal and grew up in the affluent suburb of Westmount, where he attended Selwyn House School, and later Lower Canada College. His father was chief financial officer of the Birks jewellery chain.

He’s married with three children: two boys and a girl.

Mr. Macklem first joined the Bank of Canada in the 1980s after completing a master of arts degree in economics at Western. He left to do his PhD, also at Western, before rejoining the bank in 1989.

Friends and former colleagues use adjectives such as “level-headed” and “even-handed” when asked to describe Mr. Macklem.

“He comes across as extraordinary thoughtful. He will have his own views but he will also be very open to hearing the ideas of others,” Mr. Alexander at Deloitte Canada said. “He doesn’t always assume he knows the right answer.”

The new bank appointment is not the first time Mr. Macklem has been tapped by the Liberal government. In 2018, he was asked to head a major study on how Canada could move to the forefront of what’s called sustainable finance, a growing field that aims to harness the financial sector in the battle against climate change through measures such as investments in new technology. 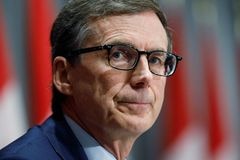 Who is Tiff Macklem, the new Bank of Canada governor?
Subscriber content
May 1, 2020