Tim Hortons is slimming down.

At its newest café in Toronto, seating is restricted to a long communal table against one wall, and the decor is an attempt at a more modern look. The location in the city’s Beaches neighbourhood is the first example of a store format that the coffee chain will soon bring to city centres across Canada. Another store opening this week in downtown Toronto follows a similar design. At 1,300 square feet, it’s not exactly small for an urban coffee shop, but it’s small for Tims.

While the chain has opened scaled-down on-the-go cafés before – for example, in gas stations – this strategy is different. With nearly 4,000 locations in Canada, the brand is “very penetrated” in suburbs and rural areas, Tim Hortons chief operating officer Mike Hancock said. But in city centres, it is either on par with or lagging competitors in store counts.

So as Tims seeks new stores in competitive downtown areas, it has to change its design. While its typical cafés are about 2,500 to 3,500 square feet, what it calls the new “super urban” locations will range from as small as a bachelor-apartment-sized 600 square feet to 1,800, depending on what’s available.

He said downtown cores such as Toronto, Montreal and Vancouver are becoming increasingly competitive. "Rents continue to go up. The footprint availability, the size of the stores, are getting smaller and smaller,” Mr. Hancock said.

Tims is not alone. Ikea recently announced it would begin opening smaller stores in downtown Toronto, testing a format with the intention to open multiple locations in Toronto and elsewhere, such as Vancouver and Montreal, in coming years. They’re a lot bigger than a coffee shop, but a major change for the big-box homewares retailer.

Those cavernous furniture labyrinths range from 250,000 square feet at their smallest up to 400,000. But one of the two urban stores Ikea is testing would be about 50,000 square feet and would carry a full range of products, but deliver to homes or pick-up points rather than stocking an on-site warehouse. The other would be closer to 5,000 square feet and would offer a limited range of products (based on a category such as kitchens, or an assortment targeted to the needs of people in the neighbourhood.) The company has already opened such stores in cities such as Paris and New York.

Retailers in the United States are pursuing similar strategies. Target has been opening more smaller-format stores in downtown centres and around college campuses, and said earlier this year it plans more. By shrinking its stores to about one-third the size of a typical Target, the company hopes to attract new shoppers. U.S. department store chain Kohl’s has opened smaller stores and reconfigured others to lease space to tenants such as Planet Fitness. Macy’s has also been testing smaller “neighbourhood” stores to cut costs.

“With a more densified type of living, we expect to continue seeing more demand for smaller retail-format stores," said Ray Wong, vice-president of data operations and data solutions for Altus Group Ltd. Those include bubble tea and coffee shops, and furniture stores that offer compact products for shrinking condos.

“Many more people are moving into cities all over the world,” Mr. Ward said. “… People live, shop and work more locally; they have less time; they don’t always have their own transportation; and they have more choice because more interesting business models are emerging.”

Those business models, of course, include e-commerce. Delivery is especially important for public transit-reliant downtown dwellers, but porch theft and delivery fees are a hindrance. Ikea offers its own delivery, but has also partnered with PenguinPickUp, a service that operates its own stores and works out of UPS locations to allow people to pick up packages near their homes. The service’s other retail partners also include Walmart Canada and Dollarama. At one location in Toronto’s Entertainment District, Walmart has stocked some groceries, snacks and meals that people can shop for on-site and pay for through the retailer’s app.

For Tim Hortons, the new smaller locations will also stock some menu items that were tested at the upscale-looking “innovation café” it opened in downtown Toronto during the summer.

“We do think there’s a lot of opportunity for us to continue to grow our brand in these super-urban markets,” Mr. Hancock said. “I wouldn’t say we’re necessarily only looking for small spaces. But we’ve built it in a way to make sure that it can operate in smaller spaces, because that’s how a lot of the opportunities present themselves in these markets.” 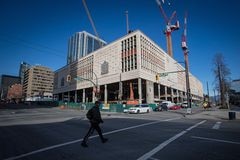 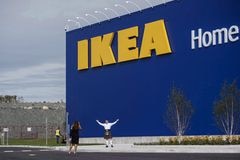 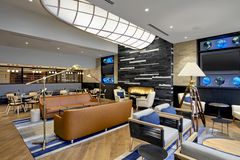