Tim Hortons will be giving away nearly two million reusable cups starting next month, the first step in what the company says will be a 10-year push to reduce the waste it produces.

The move will be part of a revamp of the coffee-and-doughnut chain’s Roll Up The Rim To Win promotion, which is a mainstay of its annual marketing efforts but attracted criticism last year.

The prize giveaways are hidden in the rims of disposable cups and environmental groups criticized Tim Hortons for promoting single-use packaging. Because hot-liquid cups distributed by fast-food chains are generally lined with plastic, many municipalities do not process them for recycling. Last April, Tims parent company Restaurant Brands International Inc. said that its weak quarterly results were partly owing to waning interest in Roll Up The Rim. Tim Hortons has announced changes to that program, which include more ways to participate digitally.

The contest running March 11 to April 7 will still use disposable cups for the first two weeks, but will offer chances at prizes through the Tims mobile app, with an extra chance for those who buy coffee in reusable cups. The company is hoping the cup giveaway, which starts March 10, will create some goodwill toward the brand.

The 1.8-million cups Tims will give away for free are polypropylene plastic, and printed with a caution that customers should use a cup sleeve for hot beverages.

Businesses that rely heavily on disposable packaging are feeling pressure from consumers to change their ways. Last month, Tim Hortons competitor Starbucks announced a commitment to cut its carbon emissions and waste in half by 2030. Achieving that goal will require distributing fewer to-go cups, as well as changes to its supply chain.

“While we’ve done some things to make our cup more recyclable, we truly believe that the 10-year path here needs to be on reusable, not recyclable,” Restaurant Brands chief corporate officer Duncan Fulton said. “… We strongly believe that the future of Canada, the future of the planet, is training a new generation of customers who could never imagine using and throwing away a cup just once.”

The cup giveaway comes amid other efforts at Tim Hortons. The chain recently changed the lid on its to-go cups from polystyrene to polypropylene to make it more easily recyclable. It also changed the design of its cold cups to eliminate the need for straws. It is phasing out plastic stir sticks from stores and will have wooden stir sticks in place by this summer.

Tims has announced a 10-year marketing plan to promote reusable cups. The chain is also expanding the variety of reusable cups for sale in its restaurants. It has sent new clear-plastic cups to locations across Canada, so that when staff are making more complex drinks they can then pour those drinks into customers’ reusable cups. Executives are also meeting with companies to discuss pilot projects to come later this year, to encourage adoption of reusable cups. And they are considering how to offer a reusable-cup option for drive-through customers, without significantly slowing down service at its drive-through windows.

“Still to be determined, is it better to do marketing to teach customers to wash their own reusable cup and bring it back with them? Is it better to take back a reusable cup and sanitize it in the restaurant for reuse? Is it better to have a closed-loop system where you take a cup and then you have places where you can return it so that it’s sanitized and put back into the restaurant by a third party? There are tons of financials involved, there are tons of operating procedures involved,” Mr. Fulton said.

It is not enough to give away reusable cups; people have to use them to make it worth the materials that go into them. Those plastic cups take more energy and materials to make than disposable ones do and use energy because they have to be washed between uses. Researchers have conducted life-cycle analyses showing that reusable cups need to be used, in some cases, dozens of times to make them more environmentally friendly than single-use cups – the number can vary depending on how they are washed, how hot the water is and what material they are made of.

The cups Tim Hortons is giving away are made of a dishwasher-safe material and display the chain’s logo. As it steers customers away from single-use cups, it wants visibility for the brand.

“The cup in your hand is one of the most powerful marketing vehicles that many companies have,” Mr. Fulton said. 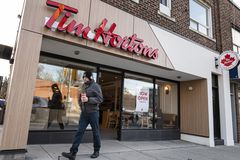 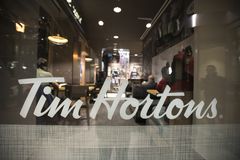