Coffee-and-doughnuts chain Tim Hortons is continuing to drag down earnings for parent company Restaurant Brands International Inc., even as customers have been turning to drive-through lanes and delivery services for physically distant options during the global coronavirus pandemic.

Tim Hortons relies more heavily on the morning commuter than Restaurant Brands' other chains, Burger King and Popeyes Louisiana Kitchen. As people work from home, traffic has been down. Comparable sales at Tim Hortons locations fell by 12.5 per cent overall, and 13.7 per cent in Canada, in the three months ended Sept. 30, Toronto-based Restaurant Brands reported on Tuesday. Burger King also saw comparable sales decrease, by 7 per cent compared to the same period last year. Meanwhile, comparable sales at Popeyes rose by 17.4 per cent.

Restaurant Brands has been affected by restrictions on indoor dining during the COVID-19 pandemic. While more than 96 per cent of its restaurants globally had reopened as of September, some jurisdictions such as Ontario and Quebec have brought back restrictions as cases have risen recently. That has driven traffic down again. The fast-food company signalled that the pandemic will continue to affect its results in the fourth quarter.

“The environment in Canada remains challenging,” RBI chief executive officer Jose Cil said on a call with analysts to discuss the third-quarter results on Tuesday. When it comes to coffee sales, “the pie’s gotten smaller,” he said.

Meanwhile, drive-through and delivery sales have been rising. The company said on Tuesday that it will invest approximately $120-million to update its drive-throughs at more than 10,000 locations and all three of its brands, by mid-2022. That will include making contactless payment a permanent feature by asking customers to pay at the same terminal where they place their orders. The feature will speed up drive-through lanes, the company said.

RBI also announced that its new digital menu boards will effectively see customers coming – integrating with loyalty programs such as Tims Rewards in order to show tailored offers to people who have the mobile app loaded on their phones. The screens will use this “predictive selling” feature to display promotions based on a customer’s previous orders, in addition to changing offers based on time of day and weather patterns. The menu boards have been built to detect the loyalty app either when the customer scans their phone, or through Bluetooth or near-field communication. Tim Hortons is already testing the feature at 30 locations in Canada.

“We have [loyalty members'] purchase and payment history, so we know the types of things that you tend to order,” RBI’s chief corporate officer Duncan Fulton said in an interview. “If you’re somebody that always orders a chicken wrap for lunch, it’s an opportunity for us to promote new sandwiches, to get you to try new products that you may not have already tried. … That’s where the integration of loyalty is really interesting.”

The company is assessing locations to install double drive-through lanes where possible to increase capacity. Mr. Cil added that Tim Hortons has the largest number of fast-food drive-through locations in Canada.

“Even in the current situation where people are still working from home, and aren’t really using transit as they were prior to the pandemic, these are important investments to really lock down our leadership in these areas which are critical for our business long term,” Mr. Cil said in an interview.

Coffee to go – and come back: Tim Hortons to introduce bottle-deposit-style reusable cups in cafes next year
Subscriber content
October 22, 2020 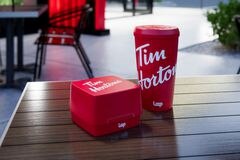 The end of double cupping: Tim Hortons ditches two cups in favour of one with sleeve
Subscriber content
October 21, 2020 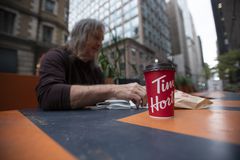 ‘There is no back to normal’: Ghost kitchens reshaping delivery
Subscriber content
October 22, 2020 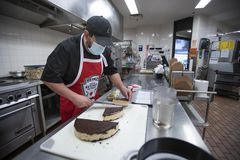