TMX Group Ltd. chief executive officer John McKenzie says he is working to foster a trading ecosystem in which Canadian biotech and pharmaceutical companies will choose to list domestically in an attempt to halt the flurry of companies in that sector heading south of the border to list on the Nasdaq.

“We are quite conscious of it and we are looking for solutions,” Mr. McKenzie said. “There’s nothing different or special about the exchanges in the U.S. or the rules set that makes it easier to list there.”

A slew of mid-cap Canadian companies in the hot biotech and pharmaceutical sectors such as Hamilton-based Fusion Pharmaceuticals Inc., Montreal cancer-drug developer Repare Therapeutics Inc. and Vancouver-based AbCellera Biologics Inc., an antibody drug discovery platform, went public in 2020 – but all on the Nasdaq Stock Market. The trend means Canadian exchanges are missing out on the often-lucrative fee generated by initial public offerings.

Mr. McKenzie, who took on the role of TMX Group CEO in August, did not provide details on how exactly companies could be convinced to go public domestically, but said he believes that the issue is less about a lack of a domestic shareholder base that will be able to support a robust listing, and more about the participation of large banks and investment firms needed to finance and support deals.

“If you look at the actual statistics around companies that bypass the Canadian market and go directly to the U.S., it continues to be extremely small. But it is definitely something we are having an active dialogue with participants in Canada about,” he said.

The TMX reported 2020 earnings on Tuesday that surpassed analysts’ expectations, driven mostly by a surge in trading volumes and capital formation activity on the TSX and TSX Venture Exchange. The exchange’s 2020 revenue jumped approximately 7 per cent to $865.1-million from $806.9-million in 2019. Profit for the year was $279.7-million, up 13 per cent from $247.6-million.

Notably, the exchange benefited from a sharp increase in the number of large tech IPOs in 2020, including Nuvei Corp.’s US$833-million offering in September that was the TSX’s largest tech IPO ever, until last week’s long-anticipated public debut of Telus International, which raised well over $1-billion.

Total financings from technology stocks on the TSX and TSX Venture Exchange amounted to $8.1-billion in 2020, compared with $2.2-billion the year prior. An increase in mining deals also helped boost the TMX’s capital formation revenue, with a combined $7.5-billion in financings in 2020.

High market volatility in 2020 was reflected in the TMX’s overall trading volume, which surged by 51 per cent in the final quarter of 2020, compared with the last three months of 2019. Retail trading volumes in particular were much higher in 2020 compared to 2019.

“There are a number of underlying factors that are driving this high rate of participation by retail investors. Of course it’s the low interest rate environment that drives higher yields and higher valuations, but also a significant number of people are working from home with access to various trading apps,” he said.

The GameStop frenzy that captured North American markets recently was reflected to some degree in the TMX’s January trading volume – retail trading accounted for 45 per cent of that total volume compared to 35 per cent in 2019.

Mr. McKenzie also told The Globe and Mail that he anticipates making a number of acquisitions in 2021, specifically centred on improving the exchange’s access to more sophisticated analytics and data tools, including for Trayport, the exchange’s energy trading business.

“We are looking for tools we can add to both Trayport in Europe, and [others] in North America … that’s the area you will continue to see us active in.”

The TMX also confirmed that it would launch extended hours for derivative trading (from 14.5 hours to 23 hours) starting May 30, in a bid to lure Asia-Pacific institutional investors. The exchange’s derivative trading and clearing revenue decreased by 8 per cent in the last quarter of 2020 to $30.8-million compared with the same time a year prior. 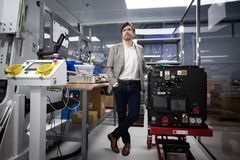