Toronto online company Tophatmonocle Corp. has hired a new CEO and secured a US$130-million investment from its largest shareholder to pursue its strategy to transform the postsecondary textbook trade into a digital industry.

“We were looking for someone who had a track record” of leading online software companies as they scale up to large enterprises, said Mr. Silagadze, who led the search and handpicked Mr. Rohrlich. Mr. Silagadze, 37, will remain on the board and take an unspecified job within the company. “I’m not done with Top Hat, I am sticking around in a day-to-day role,” he said. “I do plan to contribute as long as Joe will have me.”

In addition, the company said Toronto growth capital firm Georgian has invested US$130-million in Top Hat. Two sources familiar with the deal said about US$50-million would go into the company to fuel its strategy to buy up conventional textbook publishers, while the balance would be used to buy out some shareholders. The Globe and Mail is not identifying the sources as they are not authorized to speak on the matter. The financing values Top Hat at about US$500-million, with Georgian owning close to 50 per cent.

The deal will help Top Hat position itself to be as a leading disruptor in the education sector as publishers shift away from from physical textbooks.

“We love the market they’re in,” said Justin LaFayette, lead investor with Georgian, which first invested in Top Hat in 2014. “This is a once-in-a-lifetime-type digital shift in higher education where every institute of higher learning is going to have to figure out how to engage and teach students inside and outside the classroom. ... This is a tremendous market opportunity [for which] we think the company is best positioned.”

Mr. Silagadze founded Top Hat in 2009 with a plan to build an iTunes-type service for higher-education content. He believed textbook publishing was ripe for the same disruption the music industry experienced when online services enabled widespread pirating while encountering resistance from established players who eschewed digital distribution.

Top Hat initially offered to produce digitized versions of textbooks for publishers, but they only wanted PDF versions for which they charged full prices. So Mr. Silagadze instead marketed the platform to professors to publish their own interactive multimedia online textbooks. Top Hat made the content available to others on the platform, offering authors a higher cut than they earned writing conventional texts, while charging students less than industry norms.

In the past two years, Top Hat has started buying conventional postsecondary course materials publishers, offering their titles in digitally distributed versions with a goal of abandoning physical formats. It has purchased Fountainhead Press of Dallas, bluedoor of Minneapolis and Canada’s university textbook publishing business Nelson Education Ltd. The latest financing comes a year after Top Hat raised US$55-million for that strategy.

Top Hat has added 1,300 titles with the three deals, in addition to hundreds written by its professor customers. Its course materials are used by millions of students across North American higher-education institutions. Annual revenues exceed US$50-million.

Mr. Silagadze said Top Hat is in talks “with probably a dozen” publishers with revenues ranging from US$10-million to US$100-million each. Should larger deals materialize, Mr. LaFayette said Georgian would be open to provide more funding. “They’ve clearly proven that they can do acquisitions of textbook content in an accretive, efficient way. There’s a tremendous opportunity ahead to continue that.”

Mr. Rohrlich, 40, a California native, started his career in the entertainment business, working as a producer’s assistant with Kelsey Grammer’s production company. “I did what every good kid from L.A. does – make the incorrect assumption that the only form of business is show business,” he said.

He joined Bazaarvoice, which sells software tools for e-commerce merchants to provide customer ratings and reviews, in 2010, advancing through a series of sales roles to become chief revenue officer in 2019. Mr. Rohrlich, who will remain based in Texas for now, said, “Top Hat has a market opportunity to become a category-defining company that solves a big problem,” he said. “I see all the proof points in Top Hat that exist already today but can exist at greater scale. That’s my mission.”

Georgian’s Mr. Lafayette said: “Really good entrepreneurs put the success of the company ahead of themselves and are willing to do whatever it takes to succeed. In this case, Mike saw that with the scale we were getting to, that having a CEO with more experience was a better and surer way” to move ahead. 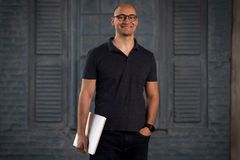